What You Need To Know About Corn, GMOs, and Healthy Popcorn

I'm a mother, environmental scientist & former Covid contact tracer who does research on a variety of health-related topics. Copyright 2021

Corn is in many of the food products that we eat including cereal, crackers, chips, snacks, popcorn and sweetened foods. There are dozens of corn derivatives that appear on food labels today. Corn production is cheap, making corn a cheap additive to packaged foods. Most of the corn that is grown as a food additive is genetically modified or engineered in some way. We all know that avoiding packaged foods by eating a whole-foods based diet is the healthiest option, but we aren't going to abide by this all the time. By doing a little reading, we can figure out how to enjoy the best of both worlds while avoiding GMOs.

You might not need to know more than this one fact about corn and other crops to want to stop eating GMOs: DNA from animals, viruses, bacteria, insects or even humans are inserted into the DNA of the crop. The purpose of altering the DNA is to make the crop more productive or more resistant to insects or weather for example.

According to the American Academy of Environmental Medicine (AAEM), the use of genetically altered foods should be halted immediately. Their official opinion is that genetically modified foods have not been tested properly and that they pose a significant risk to our health.

You might think that buying organic corn isn't necessarily a priority if you look at the 'dirty dozen' list of produce. These are the crops identified by the Environmental Working Group (EWG) to have the highest use of chemical pesticides and/or fertilizers.

Part of the reason corn is not on this list is that corn crops have been genetically modified to withstand the common pests that would otherwise require heavy chemical use to kill. And this is the exact reason we want to only buy organic - to avoid eating genetically modified organisms.

For a product to meet USDA Organic certification, the use of GMOs is prohibited.

What is Healthier Popcorn? A Popcorn Recipe

If you like to indulge in a bowl of popcorn, here is a recipe for making it more healthy.

By popping it yourself at home, you avoid microwave popcorn bags which contain unhealthy chemicals. Also be sure to check carefully that the popcorn popper says stainless steel on the label, otherwise it is likely made of aluminum. 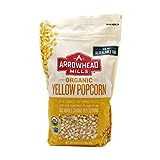 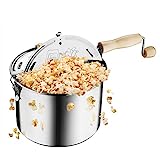 The Best Shopper App: Tells You Which Foods Contain GMOs

Disclaimer
Note that this website portrays my opinion. I want to help others consider a new or different view. Any action taken based on these opinions is the responsibility of the reader.

As with other genetically modified foods, we all have a choice. If we want to avoid unhealthy side effects and diseases caused by long term exposure to GMOs, then we must support whole, healthy foods that do not contain them. Organic corn products are just one way to avoid GMOs. In the meantime, support movements against GMOs that are popping up in the media to take down the genetically modified food industry. Sign the petition below.