How To Make The Best Baked Potato With Yummy Toppings And Fillings!

An Oven Baked Potato With A Good Topping Or Filling Is Simple Food At Its Best!

Do you want to make the best baked potato and get some great ideas for some yummy fillings and toppings?.

Sometimes I think that a baked potato with a lovely topping makes a great meal, and there are countless ways that you can serve your baked potato just by varying the filling, it is possible to try a different topping every day of the year if you were that keen. The humble jacket potato can never be said to be boring!

Baked potatoes can be cooked in a convection oven, a microwave, on a grill, or on/in an open fire.

In my experience the best baked potatoes are cooked in the oven, they have a nice, crunchy, crispy skin and are hot, soft and fluffy inside.

The easiest way to cook the best baked potato is to throw the potato in the oven and forget about it for an hour or so, then enjoy a wonderful, hot, fluffy, baked potato with a crispy skin!

I really don't believe that there is a hard and fast recipe to follow when cooking jacket potatoes, some of the time it comes down to luck rather than judgement, just put the potatoes on the middle shelf of the oven and leave them for anything up to two hours while you go and do other things. When you come back, your baked potato is ready, piping hot ready for you to add your perfect topping or filling.

OK, I guess is a little bit more to making the perfect baked potato than that so let me elaborate:

For the best baked potato look for a white 'floury' variety of potato such as: 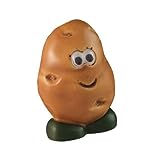 Msc International Mr Potato Brush 50740 PRO
Unless you but ready washed poratoes you are going to want to clean them thoroughly, and Mr Potato brush is just the tool for the job! He's great for removing loose dirt from potatoes and silk from ears of corn.... and he looks great too :-)
Buy Now

Preparing And Cooking Your Baked Potato - Before putting your potato in the oven...

Unless you buy pre washed potatoes you will need to scrub your baking potatoes thoroughly to get rid of any dirt then dry them well with a cloth, leave them aside to dry as much as possible.

Prick the potato skins a few times with a fork and rub olive oil over the skin of each potato.After that, rub in some crushed sea salt to make the potato skins more crispy when cooked. Put the potatoes straight on to the middle shelf of the oven, pre heated to about 200Â°C and let them bake for 11/2 -2 hours depending on the size of the potatoes, or until the skins are really crispy.

When Making A Baked Potato - Size Matters! - Cooking times for baked potatoes will depend on their size and shape.

Obviously smaller baked potatoes will be ready sooner but they lack the appeal of a larger potato. Potatoes which are between 350 and 400g in weight will take about an hour to cook in the oven and are large enough to work with and satisfy your hunger. If you are going to stuff your potatoes, then deep round ones are better than those that are flat as it is easier to work with them.

When baking several potatoes at the same time...

try to make sure that they are all of a similar size and shape, that way they will all be ready together.

So What Are The Best Toppings And Fillings For Baked Potatoes?

The possibilities for fillings and toppings for baked potatoes are almost endless, here I hope to give you some great ideas to transform your simple oven baked potatoes into a wonderfully tasty meal. Try using the ideas and recipes on this page for jacket potato toppings or experiment, be creative with different fillings to make the best baked potato you will ever have.

If you have your own favorite topping or filling for a baked potato please let us know about it.

Baked Potato With Salsa Topping - delicious salsas provide a great topping for your jacket potato, I could give you a recipe for the salsa but beeobrien does it much better on her lens Fresh Homemade Mexican Salsa: Traditional and Unusual Recipes and Ingredients. Any of her recipes for salsa would go great at the side or on top of your baked potato.

For The Garlic Mushrooms:

Melt the butter in a saucepan, add the garlic and mushrooms and cook gently for 5 - 10 minutes. Stir in the cream cheese and continue cooking for 1 minute. Add the herbs and season to taste.

Heat the oil in a frying pan and fry the leeks for 3-4 minutes.

Cut the cooked baked potatoes in half lengthways, scoop out most of the flesh and mix with the leeks, mayonnaise, seasoning and Worcestershire sauce. Place back in the potato jackets.

Top with cheese and place under a preheated grill for 3-4 minutes or back in the oven for a further 5 minutes, until melted and lightly golden.

I Never Tire Of A Hot Potato Topped With Beans, It Makes An Easy And Comforting Meal

What could be easier than heating up a tin of baked beans and pouring them over a hot buttered baked potato?

This simplest of meals is actually one of my favorites for lunch or a lighter meal!

All I do is heat the beans, cut open the potato, put a little butter on and then drizzle the hot beans over the top seasoning with a little ground sea salt.

To spice it up a bit I sometimes add a few drops of Habanero Tabasco Sauce to the beans.

Try something different though, Janiece has a great page featuring different Cinnamon Apple Baked Beans and other bean recipes which would be great as a topping for your baked potato.

Never Mind The Rice! Serve Your Hot Chilli Over A Steaming Jacket Potato!

Who doesn't have a favorite chili recipe! Chili goes just as well with a baked potato as it does with rice or bread.

Some people like it hot and others a bit milder, there is no set way you should make your chili, its just how you like it!

When I make curry, if there is any left, I might have it for lunch the next day with a small hot baked potato.

Curry does freeze well though so if you have any left just let it cool then put it in the freezer ready for when you need it!

What would a baked potato be without cheese!

I think that cheese was probably the first ever thing I had with a baked potato. Those days it was probably just a bit of mild cheddar grated on the top for me, but it is so much easier to get lots of different cheeses nowadays and most of them will go great with a baked potato either grated over the top or mixed with the soft, fluffy potato middle then put back in the oven until it is bubbling and beginning to brown on top.

If you are short of time, microwaving a baked potato could be the answer.

How long it takes to microwave baked potatoes also depends on their size but as a guide I would say around 10 minutes.

Just scrub the potato, and prick it all over several times, this helps to release the steam when cooking and prevents the microwave baked potato exploding.

Place the potato on a plate. Cook on full power in the microwave for 5 minutes then turn the potato over, and continue to cook for 5 more minutes. 10 minutes should be enough depending on the size of the potato but if it is large then it may need a minute or two more. When the potato is soft, remove from the microwave, cut in half lengthwise and top with your favorite topping.

To Get A Crispy Skin With Microwave Baked Potatoes

For the extra 10 mins I would rather have the crispy skin but that's a personal thing.

More Ideas For Great Toppings And Fillings For Your Baked Potato

The Cooking Temperature For Baked Potatoes

I find that 200 degrees C works best, giving a nice fluffy potato with a crisp skin. 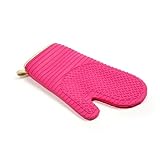 Be Careful When Handling Hot Potatoes! - Baked potatoes straight from the oven are very hot!

Always wear protection for your hands when removing your baked potato from the oven to avoid nasty burns!

Whatever you are removing from the oven you need a decent oven glove that will protect you from burns!
This glove is heat resistant up to 485F/250C. The non-skid silicone on the outside protects your hands from the heat, and, the fabric on the inside keeps your hands comfortable.

Do you eat the skin on your baked potato or do you discard it and just eat the filling? - Take our quick poll on eating baked potato skins.

A large percent of the vitamins, minerals, and trace elements in a potato are found within or immediately below the skin and I do love the taste and texture of the crispy skin on a baked potato so I always eat it, but some people remove the skin and eat only the fluffy potato inside.

Do you eat the skin on your baked potato?

What is the Difference Between a Baked Potato Topping and a Filling?

Do you top or fill your potato

My thoughts are that a filling is placed inside the potato before it is served. For instance if I made cheese stuffed potatoes - The cooked potato would be removed from the skin and mixed with the cheese before returning it to the oven until the cheese is melted throughout.

A baked potato topping is usually served on the side, or simply placed on top of a baked potato, for example in the case of cheese it would be served at the side of the potato or grated on top.

Baked Potato Nutrition Facts And Information - What is the nutritional value of your baked potato?

As I have said before, size matters with baked potatoes so it isn't easy to quantify the calories and other nutritional amounts exactly, but , a guide for a large potato is shown above.

If you need to be more exact then you need to check the weight of your potato and also count the butter and other fillings or toppings that you use.

A baked potato on its own contains no cholesterol!

What Are Your Favorite Baked Potato Recipes For Toppings And Fillings? - Share your ideas for baked potato toppings and fillings here

If you prefer toppings to fillings or you have a favorite topping or filling for your jacket potato then share tell us about it here. I confess that I like baked potatoes both ways, its hard to choose sometimes.

What Are Your Favorite Potato Toppings And Fillings?

The Best Oven Baked Potato Recipes From Around The Web

The images on this page are all available to purchase from Art.com, click on the image for more information.