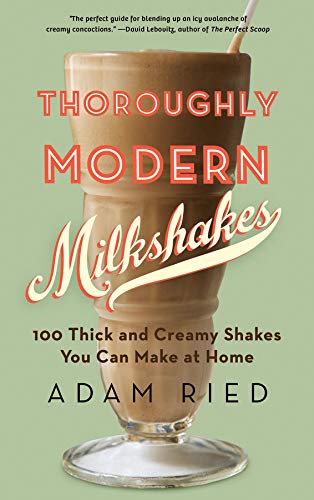 I wrote this article not so much for a recipe to make great milkshakes (Smoothies) as most everybody knows how to do that (although a recipe for banana ice cream milkshake is included).

It's more about giving tips and ideas on using your blender and the Bialetti innovatively to give you more versatility, without the need to buy lots of expensive specialised gadgets that you would only occasionally use, to make cool and refreshing fruity drinks, easily, quickly and cheaply.

The Bialetti (a milk frothing appliance) featured in this article is not only great for making hot frothy drinks but are also good for making other cool drinks. I'm particularly pleased with the Bialetti (which we purchased years ago) because of its versatility in making hot and cold frothy drinks, including milky drinks, coffee and other cool drinks. Albeit, if using the Bialetti to make fruity drinks you'll need to blend the fruit first in a conventional blender.

Adding ice-cream to a milky drink is a winner for making it cool, creamy and smooth; alternately, just placing a cool drink in the fridge for a while is a great simple way to keep it cool until needed.

Using Your Blender to Make a Banana Ice Cream Milkshake

You can now either pour the mixture into glasses and serve your banana milkshake as is, as a refreshing drink, or to froth and (if you didn't add ice cream) cool use the Bialetti and have a cool refreshing frothy milkshake in minutes or place in the fridge for an hour. 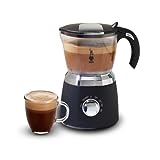 Cooling and Frothing Your Milkshake

Using Either the Bialetti or Your Fridge to Cool the Drink

Once you've made your banana milkshake, as described above, if you decide to froth it and cool it a milk frother such as the Bialetti featured in this article is ideal; and only takes a few minutes.

Although the Bialeti's main function is to make hot frothy milky drinks such as hot chocolate and cappuccino it does include a 'cool mixing' option which is ideal for making cool frothy milkshakes. However, it is not a blender so if you intend making your milkshake from real fruit rather than flavourings and syrups added to milk you will need to blend the fruit in a blender first.

To Use the Bialetti to Make Cool Frothy Milkshakes

If you don't have a suitable milk frother and cooler then optionally place your milkshake in the fridge for an hour, or until nice and chilled; you may need to give it a quick stir just before serving if the ingredients have started to settle.

Refreshingly Cool and Fruity With or Without Ice Cream

Simple recipe ideas to make a cool and refreshing milkshake fresh from bananas, and for added coolness, optionally made with lavish scoops of ice cream.

A great easy to make recipe made in minutes with just a few basic ingredients from your fruit bowl, fridge and freezer.

Instructions for Making the Milkshake

Cast your vote for Banana and ice-cream milkshake recipe

Thoroughly Modern Milkshakes: 100 Thick and Creamy Shakes You Can Make At Home
A recipe book with 100 milkshake recipes; so plenty of ideas to ponder on and try out when thinking of serving cool milky drinks. Also, in using this book it may also inspire you to create your own recipe ideas.
Buy Now

It's nice for a banana milkshake to be cool which ice cream helps to do. Although even if it’s not a cool it still makes a pleasant refreshing drink; and it can be made simply with little fuss within minutes.

However, if you have the time and equipment you can still make it cool and frothy without ice cream.

Ofcourse, if you don’t have a Bialetti with this setting you can always cool your banana milkshake in the fridge; which is the second, and simpler, option I cover in this article.

Banana to Milkshake Quickly Made in the Blender or Bialetti Bananas are an easy choice, and a safe bet for, for a cool refreshing drink. Although, blending any soft fruits, or even a mixture of soft fruits, should produce some really tasty alternatives; particularly strawberries and raspberries.

However, if you want to get really adventurous even the firmer fruits such as apples and pears, if they are blended to pulp (and optionally strained to separate the juice) could make some interesting drinks.

If you do experiment with trying different fruits it would also be prudent to taste after blending, and decide whether it needs further flavouring, or the flavouring enhancing e.g. by adding a small amount of orange juice to taste, or squeezing the juice from half a lemon into the mix.

Alternatively, rather than adding milk to make a milkshake, you might wish to add water and freeze the fruity mix in moulds, using a spoon as a lolly stick, to make ice lollies.

Another option might be to make ice cubes from blended fruits and then use them during a hot summer to spice up your drinks.

You Can Also Use Your Bialetti to Make Hot Frothy Drinks

Step by step demonstration video made by me on making great hot frothy drinks with a Bialetti as featured in this article. The Bialetti Hot Chocolate Maker and Milk Frother shown here also has a 'cool' setting which is great for making cool drinks and milkshakes.

How do you make you milkshakes?

How do you make your Milkshakes? - Share your tips and experiences here