Pulled pork for many is a dish cooked outdoors on the bbq or grill, long and slow, to ensure the meat is incredibly tender and can literally be pulled gently from the bone. It will frequently be made from a shoulder cut of pork. In this instance, the pulled pork recipe is inspired by the popular Bavarian dish, schweinshaxe, a grilled knuckle of pork which is served whole and usually with a potato accompaniment such as potato dumplings (reiberknödel) and sauerkraut. In Bavaria, the pork knuckle will be cooked on a large form of rotisserie grill to ensure the skin is extra crispy. In this recipe, the pork shank is cooked in the oven and the fatty skin removed and discarded prior to service. The sauerkraut (which takes about six weeks to make from start to finish) is substituted by some cabbage simply braised in a little oil.

How About this for a Bargain Rotisserie Grill?

Ronco ST5000PLGEN Showtime Rotisserie Platinum Edition
If you want to make a truly authentic Bavarian schweinshaxe at home, as you would be served in Munich, you will need a proper rotisserie grill. This stunning model is currently available to buy from Amazon at less than a third of its recommended price! Features include preset temperatures and rotation speed and this purchase comes complete with a non-stick basket, a carving tray, oven gloves and even specific recipe suggestions.
Buy Now

Schweinshaxe, potato dumplings and sauerkraut has a special significance for me as it was the first meal I ever ate - a number of years ago now - in Munich. There have been very few of my many trips since where I haven't enjoyed the dish at least once. You will find schweinshaxe served in traditional Bavarian restaurants, tourist hot spots such as the Hofbräuhaus and other large beer halls, as well as - of course - at the world famous event that is Oktoberfest, every late September/early October. The size of the pork knuckle and the price you are charged will vary hugely, with popular tourist venues often representing the least value for money. It is more than worth, therefore, if you do want to sample this dish in Munich, looking at some of the smaller restaurants and cafes, where you will often see the pork prominently displayed as it grills. 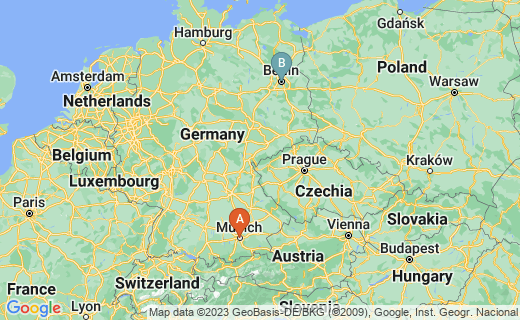 Plating Up and Serving Your Meal Guten appetit! - as they say in Bavaria...

Why Not Enjoy an Authentic Bavarian Beer with Your Meal?

In the photo further up this page, the schweinshaxe meal was served and very much enjoyed with a maβ (litre) of Bavarian helles beer, similar in some ways to American beer or British lager (though usually much stronger in terms of ABV!) In this instance, the pulled pork and German dumplings meal is served with weissbier (wheat beer) and very enjoyable it was, too.

Thank You for Visiting - I Hope You Liked this Recipe Idea