Make sure you have one of the best sandwich toasters

Cuisinart WM-SW2N Dual-Sandwich Nonstick Electric Grill
Currently the best selling sandwich maker of its type on Amazon, this bargain appliance is just what you need to make all the toasted sandwiches featured on this page.
Buy Now

How to make sure you get it right from the start

There is nothing complicated in the making of toasted sandwiches but - as with anything else - there are always aspects of debate and controversy which can creep in to the equation. One such debate is whether it is necessary to use real butter when making toasted sandwiches or whether a butter substitute such as margarine is acceptable. I have to be honest and say that although I have tried using butter substitutes when making toasted sandwiches, I have found that the quality is very much compromised in such instances. Yes, of course it is down to personal preference - but my recommendation would always be to use real butter.

A factor it is always important to consider in the kitchen

Whenever we are performing any task in the kitchen, we should always be conscious of the relevant safety factors. Making toasted sandwiches involves using an appliance which will become very hot immediately prior to, during and even after the cooking process. It is important, therefore, to be careful not to touch the hot plates on the sandwich maker and to keep small children out of the road during these times.

NB Note also that the filling in toasted sandwiches is likely to remain very hot for a time after cooking. This is particularly the case where such as cheese has been used and will have melted. It is important to guard against burning your mouth in this way and allow these sandwiches sufficient time to cool.

Sage and onion is of course the basis of a common form of turkey stuffing but both go extremely well with cheese. This is therefore the toasted sandwich recipe which I probably prepare most often, both for its taste and its simplicity.

Mix the four ingredients thoroughly together in a bowl with a small spoon. Sit the first slice of bread butter side down in the sandwich maker and very carefully spoon the mixture on top, Leaving a narrow gap around the edges. Place the second side of bread on top, butter side up, and close the lid of the sandwich toaster. Most toasted sandwich makers will indicate by a light coming on that the toasted sandwich is ready but around three to four minutes is the average timescale.

Perfect for breakfast or as a simple lunch

This bacon and tomato toasted sandwich recipe is not only absolutely delicious but also makes for a very attractive presentation if you perhaps want to serve it to a lunch guest. Please note very carefully, however, that it is essential the bacon be cooked before it is used in the toasted sandwich.

The first step is to grill the bacon and then roughly chop it as shown. The toasted sandwich maker should only at that point be put on to heat. The ingredients should then be assembled in the order of the first slice of bread, the bacon, the pepper, the tomato slices, the parsley and the second slice of bread. Note that no salt should be needed in this toasted sandwich recipe as the bacon should provide all the seasoning required in that respect.

Do You Want to Take Your Toasted Sandwich Making to New Heights? - Check out this fantastic offer on Amazon! 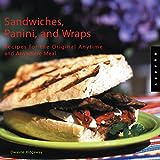 Sandwiches, Panini, and Wraps: Recipes for the Original Anytime and Anywhere Meal
Whatever your idea of the perfect sandwich, this incredible book will help you take it to stunning new levels of awesomeness. It looks at the different types of sandwiches and their history, provides ideas for different types of bread which can be used and fillings which can be incorporated and even provides tips on equipment you can find to help you improve on your results. Whether you're making a single toasted sandwich for your lunch, or preparing sandwiches for a large family picnic, here you will find all the information and advice you are ever likely to need.
Buy Now

The first step towards perfect results with an egg toasted sandwich recipe is to ensure that the egg is always removed from the refrigerator at least two hours prior to attempting to cook with it. This is not just a guideline but an essential requirement for cooking with eggs, especially when they are to be such as fried, poached or boiled.

When the egg has been allowed to reach room temperature, break it carefully in to a small bowl or cup. Pour the egg from this cup on to the first slice of bread in the toasted sandwich maker, season with salt and pepper and then sprinkle on the parsley before adding the second slice of bread.

Thank you for your visit to this page and for hopefully taking the time to read through it.

Any feedback which you have may be left below.

What is Your Favourite Toasted Sandwich?