Butter is believed to have been in use since biblical times when, legend has it, milk carried in leather saddlebags became butter through the constant agitation caused by the motion of the animal. Butter is actually made from cream; the cream is usually separated from the rest of the milk by the centrifugal action of a separator. However, cream, which has a different specific gravity from the rest of the milk, will separate naturally if the milk is simply left to stand, the globules of fat constituting the cream rising to the surface. 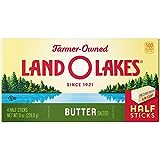 The cream thus obtained is then used to make butter. It is poured into a churn, which, when revolved either mechanically or by hand, causes the fat globules to coalesce into butter grains, which float in the residue, called buttermilk. These butter grains must then be very thoroughly washed so that no buttermilk remains in the butter. Finally, salt is added, for taste and as a preservative, and the butter is patted and compressed into blocks. Unsalted butter is used for eating and cooking, particularly in Europe; its main disadvantage, however, is that it does not keep as well. The churns used for making butter are made of wood or stainless steel, and either fresh or sour cream can be used. The cream can be soured by introducing specific lactic organisms, or it may be left to sour naturally. Cleanliness is most important in order to prevent the presence of unwanted bacteria and enzymes, since they can cause spoilage and sometimes illness.

Butter is an important export from New Zealand, Denmark and Holland, where dairying is a major primary industry. Many countries have strict import quota systems in order to protect their own buttermaking industries, and for reasons of hygiene there are very stringent quality controls on the manufacture of butter. 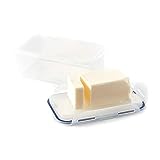 The Story of Butter

Butter is the fat of milk, separated by agitation. Nearly 2,000 years ago Pliny gave this account of how butter was made, and regarded, in his time.

Butter, also made from milk, is considered as a delicacy in foreign countries, and is one which distinguishes the rich from the lower classes. Though most comes from the cow and goat, the richest butter is made from ewes' milk. Whilst in winter the milk is first warmed, in summer the butter is extracted simply by agitation in long vessels. Air can get in though a small hole at the vessel's mouth which is otherwise bound up. A little vinegar is added to turn it sour. The most coagulated part floats to the top; it is removed, salt is added, and it is called 'oxygala'. The rest is boiled down in pots; the oily part that floats on the surface is butter. The more rank it is, the better is it liked. Old butter is mixed in with many medicines. By nature, it is astringent, emollient, repletive, and purgative.

Beside Pliny's account may be set a description of the sixteenth century from the English version (1577) of the Whole Art of Husbandry by Conrad Heresbatch:

Of Milke is made Butter ... much used of our old fathers, yea even of the very Patriarchies (as the Scriptures witnesseth.) The commoditie thereof, besides many other, is the asswaging of hunger, and the preserving of strength: it is made in this sort. The milke, as soone as it is milked, is put out of the Paile into Bowles, or Pannes, the best are earthen Pannes, and those rather broad than deepe: this done, the second or the third day, the creame that swimmes aloft is fleeted off, and put into a vessell rather deepe than big, round and Cilinder fashion: although in some places they have other kinde of Charmes, low and flat, wherein with often beating and mouing up and downe, they so shake the milke, as they seur the thinnest part off from the thicke, which at the first gathers together in little crombles, and after with the continuance of the violent mouing, commeth to a whole wedge, or cake: thus it is taken out, and eyther eaten fresh, or barrelled with salt.

In Pliny's day, butter was made by churning whole milk. What he called 'oxygala' was a byproduct resembling cheese. By the sixteenth century, dairy people were producing a butter much more like our own, by churning cream rather than milk. Heresbatch advised eating it fresh and no wonder, since butter made in his way very quickly becomes rancid and strong.

Pliny and Heresbatch both favoured souring the cream before making the butter; and it was in effect this sour-cream butter that all connoisseurs found so delicious in the days of farm butter before 1939. 'The churning of fresh cream', the Ministry of Agriculture advised in 1933, 'involves a greater loss of fat in the butter-milk ... Moreover, fresh-cream butter is rather flavourless, and does not possess that distinctive nutty flavour associated with butter from properly ripened cream.'

From 1939, the first year of the Second World War, butter was short; and since fresh-cream butter keeps better, that was the only kind permitted. After the war unsuspecting folk, who did not remember the taste of English farmhouse butter in the thirties, were startled by the strong flavour of the butter imported from Denmark.

Generally speaking, it seems that we shall now have a traditional butter no more. In 1914 in England there were two Co-operative butter factories at work. In 1954 factory butter is the rule, farm butter the exception. The Second World War brought an extra stimulus to factory production with the introduction of 'continuous butter-making' machinery, by which a high-fat cream can be converted into butter in a continuous stream. Continuous butter-makers give a rather flavourless product, and they are at work in Australia, Switzerland, Germany, Scandinavia and the U.S.A.

In India, more than half the butter-fat produced is turned into ghee. Ghee-making corresponds remarkably with the methods described above by Pliny. The milk is first converted into the yoghourt-like dahi; for which it is sterilized by boiling and then heated to separate the fat, which as ghee, has a very low water content.

Butter has varied in use and in status. It was less a universal article of diet at one time than a medicine. Reference to the medical uses of butter does not only appear in Pliny, but in suitable literature throughout the ages. Some people still use it for burns, bruises and the like. An Anglo-Saxon treatise written about A.D. 1000 advises pounding up yarrow with butter to apply to a swelling. In medieval and Tudor times, butter was usually made in spring and summer, a great deal being preserved by salting. 'May butter' was thought most nutritious, particularly for children. In 1584 the physician Thomas Cogan wrote:

It is to bee made chiefly in May, or in the heate of the yeare, by setting Butter new made without salt, so much as you list in a platter, open to the Sunne in faire weather for certain daies, untill it bee sufficiently clarified, and altered in colour, which wil be in twelve or fourteene daies, if it be faire Sunne shining.

In Cogan's day, butter was recommended for treating growing pains and for constipation. Sun treatment would certainly have made it very rancid and thus more purgative; but perhaps, too, it gave a sufficiently increased amount of vitamin D to enhance its reputation as a valuable food for children.

By the middle of the seventeenth century, butter was in disrepute, and Thomas Muffett could write in 1655 of butter as 'the chief food of the poorer sort'. In Georgian England, it went up a rung or two, since it was very widely used in the better cooking, as well as on slices of bread rather more generally than before. Mrs Beeton, the champion of Victorian gastronomy, is quite unequivocal about the butter she was prepared to tolerate:

A word of caution s necessary about rancid butter. Nobody eats it on bread, but it is sometimes used in cooking, in forms in which the acidity can be more or less disguised. So much the worse; it is almost poisonous, disguise it as you may.

It was the cattle plague of 1865-1867 which caused a shortage of butter, with a steep rise in price to one and twopence the pound, which now paved the way for the introduction of margarine. In the eighteen-nineties the public's worry was the fraudulent mixture of butter with margarine, which was now becoming popular.