What is the best spiced rum?

I know it's a hard question, but someone has to answer it. They both have such a rich and influential history, its hard to pick one over the other. They have contributed so much to their cultures and history alike. They will be remembered by all in true pirate spirit.

But there can only be one pirate king of rum. Make sure you get your say!

Got Some Captain in You?

In 1654 Henry Morgan left home for the West Indies. A born leader, he quickly became Captain on his ship and famous as a legal pirate or Buccaneer, defending British interests and generally rocking the Caribbean.

His awesome exploits on the high seas earned him a knighthood and by 1680 Sir Henry Morgan was a plantation owner and Governor of Jamaica. There he lived out his final days until his death in 1688.

Centuries later he became the figurehead for a company that became as famous as the man himself. The Captain Morgan Rum Company.

Which Captain Morgan Rum Is The Best Rum To Drink? - Which Rum Is Better

Which Captain Morgan Rum Is Your Favorite?

Captain Morgan vs Sailor Jerry - Who IS The Better Pirate ?

Captain Morgan or Sailor Jerry -- Who Is The Better Pirate?

Sailor Jerry - A Story of Art And Music

Sailor Jerry Norman "Sailor Jerry" Collins, born on January 14, 1911 in Reno, Nevada, was a tattoo artist, and while he may not be old school pirate like Captain Morgan, he is a modern day pirate in his own right. The father of modern day tattooing. Sailor Jerry would symbolizes the masculinity of a time when thousands of enlisted men were embanked in Hawaii, during World War II.

Collins entrusted his artwork to his two proteges, Ed Hardy and Mike Malone

In 1999, Hardy and Malone partnered with a small independent Philadelphia clothing company to establish Sailor Jerry Ltd., which owns Norman's letters and art collection. As an anti-sweatshop company, Sailor Jerry Ltd. produces nearly all its items in the United States. Items are sold on the company's web site or from the Sailor Jerry Store at 116 S. 13th Street in Philadelphia, which frequently plays host to performances by independent musicians.

Sailor Jerry Ltd. produces a 92 proof spiced Navy rum featuring a quintessential Sailor Jerry hula girl on the label. As the bottle is emptied, additional Pin-up girls designed by Sailor Jerry are visible on the inner side of the label. The rum is distilled in the U.S. Virgin Islands. It takes its influence from Caribbean rum, which sailors would spice with flavors from the Far East and Asia to make it more enjoyable to drink.

Who Has The Better Liquor? 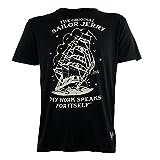 Do You Have A Tattoo?