The World is My Carrot - Funny carrot t-shirt!

Carrot jokes? Brenda, you have to be joking! Yes, indeed I am...this page is full of carrot jokes and I hope to keep finding and adding more!

Do not ask me how I got started on this carrot theme -- or I will tell you it all started with an innocent little e-mail that I received about those innocent and healthy looking baby carrots. The e-mail made some claims, some that were true and some that were not, and did not include a source. This set me off on a quest for the truth. The result, after hours spent searching the internet, was a page called Baby Carrots ~~ When Is A Carrot Not A Carrot.

Then came a page I had been wanting to write even before I received the baby carrot e-mail about a delicious recipe. This page is called The Best-Ever Carrot Cake Recipe and it really does feature the best-ever carrot cake recipe. It is a recipe that we try not to have too often in our house...because despite the fact that carrot cake contains nutrition, it also contains calories!

Then I wrote a fun page called The Carrots Had a Photo Fight Tonight. It allowed me to showcase, with the permission of the photographers, some of the amazing carrot photos that I found posted at Flickr.com. If you have not seen this page, you will want to visit it and vote for your favorite carrot pictures.

Whoa, Brenda! How did you go from there to the subject of carrot jokes???

Well, during the time I spent creating all of these great carrot-themed pages, I saw so many funny carrot jokes that I thought this would be a fun page for carrot fans around the world. Plus this page would give me a gathering place (or in Squidoo terminology) a lensography for my carrot-themed pages. I hope you find it entertaining.

Now, something's sure to Turnip,

To prove you can't be Beet;

So, if you Carrot all for me

Snowmen, Or Is It Carrots, Around The World Have Suffered This Fate...

Do you carrot all about me!

Once upon a time, an infant rabbit was orphaned and a family of squirrels adopted it and raised it like it was one of their own. This process led to some strange activities in the rabbit. It liked to run up trees the way its step-siblings did rather than hopping on the ground. Plus it ate acorns and nuts rather than carrots. When it was half grown, it realized something was different and approached its step-parents to discuss the issue. He told them that he was not sure of his role in the world and that he was dejected. His step-parents told him, "Don't scurry. Be hoppy."

What do you call a dumb bunny?

One day two carrots, who were best friends, were walking together down the street. They stepped off the curb and a speeding car came around the corner and ran one of them over.

The uninjured carrot called 911 and helped his injured friend as best he was able. The injured carrot was taken to emergency at the hospital and rushed into surgery.

After a long and agonizing wait, the doctor finally appeared. He told the uninjured carrot, "I have good news, and I have bad news. The good news is that your friend is going to pull through."

"The bad news is that he's going to be a vegetable for the rest of his life".

A guy walks into a doctors office with a carrot in his ear and a piece of celery up his nose.

The doctor told him he wasn't eating right.

How do you catch a rabbit?

Hide in a meadow and make carrot noises.

Do I Smell Carrots?

Bugs Bunny as a Carrot

Bugs bunny as a carrot! He's a Warner Brothers bean bag plush. I'm not sure if this is funny or more like a nightmare for Bugs Bunny! 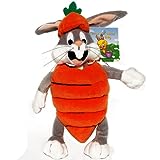 How do you make soup gold?

You put in fourteen carrots.