Cauliflower Cheese is a traditional British dish dating back to the 17th century where a cauliflower is lightly steamed, split into individual florets, covered in cheese sauces and baked in the oven for about half an hour.

It may be served on its own as a small meal or served with other vegetables such as peas and tomato or baked potatoes and baked tomatoes etc.

A very tasty and simple dish we have from time to time as a treat. In the past my wife has always made it because (although I can cook most things) I never got the hang of making the cheese sauce; that is until recently, when I stumbled across a 1940s wartime recipe for cheese sauce that works a charm.

Therefore for the cauliflower cheese I've adapted the 1940s recipe for the cheese sauce, and share its secrets here, so others who also struggle with cheese sauces may wish to give this a try. If on the other hand you don't have problems with your cheese sauces then continue making it the way you normally do; the difference isn't in the ingredients but in how and when those ingredients are mixed.

A glass of milk or a white wine with the meal or coffee afterwards.

Below are the full menu instructions, with illustrations, for preparing and cooking this wholesome tasty dish including the baked potatoes and tomatoes; followed by tips and ideas on what to do with the leftovers if you make too much. 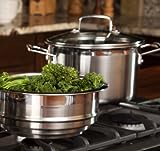 Le Creuset Tri-Ply Stainless Steel Multi-Pot Steamer Set
This saucepan and steamer set is the one I used in this recipe to steam the cauliflower. The advantage of this over a conventional steamer (like the one my grandmother used to use) is that the saucepan and steamer are multipurpose e.g. they can be used separately (when not used for steaming vegetables), with the steamer serving as a colander to drain potatoes and other vegetables boiled in the saucepan.
Buy Now

Origin and History of Cauliflower Cheese

Cauliflower cheese is a very British menu that may date back to the 17th Century. Cauliflowers were first introduced into Britain in the 17th century and although it's not certain all the indications is that cauliflower cheese dates back from about this time; served as part of the Sunday Lunch during the long winter months when nutritional food was scarce. Certainly it was a recipe (with Parmesan cheese) in the famous 'Mrs Beeton's Book of Household Management' published in 1861.

Unlike a lot of basic food recipes that are versatile and will often go with most things cauliflower cheese is a fussy dish that doesn't go well with a lot of foods so you do have to be a little careful in selecting what else, if anything, you're going to serve with your cauliflower cheese.

Traditionally cauliflower cheese is served with the Sunday Lunch (Sunday Roast) e.g. meat and two veg with gravy. However, it does make a meal on its own which is often a popular option these days; and for vegetarians, serving with baked potatoes is often a popular choice.

The menu portrayed in this recipe article is for cauliflower cheese with baked potatoes and baked tomatoes as a tasty vegetarian menu; making the cheese sauce using the 1940s cooking instructions with some minor variations of my own.

All the recipes say 30 minutes or less although in practice it's more likely to be closer to 40 minutes. With lots of preparation in a short time, including making the cheese sauce, this where you can practice your multitasking skills and utilise them to their best; rather than following the tasks step by step, which will take longer. Get yourself organised, know where everything is and be confident it's all too hand; ingredients and cooking utensils.

Using Your Favourite Hard Cheese or a Selection of Cheeses

Now comes the tricky bit which I use to always fail until I read a 1940s recipe; actually making the cheese sauce. You can use your favourite hard cheese or a selection of cheeses; for this recipe I used cheddar cheese broken into small pieces and a light sprinkling of parmesan cheese.

For the cheese sauce ingredients I suggested:-

For this recipe you may find that 1 pint of milk gives you more than ample cheese sauce, if so ideas for what to do with surplus cheese sauce are given below. Surplus cheese sauce will keep quite happily in the fridge for a few days and can be re-used in many recipes at a moment's notice just by momentarily reheating it in the microwave e.g. 30 seconds, just to liquefy it again for pouring.

From my experience I've learnt that precise amounts of any of the ingredients are not critical, so with a bit of practice you can vary the quantities yourself to taste. For example the margarine is only needed as a lubricant to stop the flour from burning in the saucepan so regardless to the quantity of the other ingredients you only need a knob of butter (or margarine). The flour adds thickness to the mix and the milk makes it more liquid so these can be varied in combination to tweak the consistency of your sauce; and the more cheese you add the cheesier the sauce is. However, don’t overdo it on the flour otherwise you could end up with a sauce that’s a little too thick and doughy.

Also, rather than sticking to just one type of hard cheese, adding a range of cheeses, if you have them to hand, adds to the flavour; in particular just a spoonful of blue cheese e.g. stilton and a sprinkling of grated parmesan cheese added to main cheese can add a lot of flavour to your cheese sauce mix.

Bring it all Together Ready for Baking

While Waiting for the Potatoes and Cauliflower to Cool

Once the Cauliflower has Cooled Enough to Handle

Traditionally cauliflower cheese is served with a full Sunday Roast but as a vegetarian dish it can be served with just potatoes and a selection of vegetables, often baked potatoes; or alternatively served on its own as a complete meal. 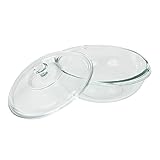 Pyrex 2-Quart Glass Bakeware Dish
This is the type of casserole dish I used in this recipe, and nothing beats a good casserole dish for making a good potato pie, I find Pyrex dishes are always handy to have and that you can never have too many; which is why most of our oven bake casserole dishes are Pyrex.
Buy Now

Make a Second Dish for the Following Day

Such as Potato and Cauliflower Cheese Pie

If there's too much cauliflower cheese, which you've opted to put in the fridge overnight, you can use it to top a potato pie as part of a meal the following evening.

If you have any cauliflower cheese left, and which has been placed in the fridge overnight, it can be used as a basis for making a simple and tasty potato pie the following evening, as follows:- The Ease of Making Cheese Sauce

How Difficult do you Find it to Make Cheese Sauce?

Your experiences and you Tips for making cheese sauce