Curry addiction - is curry good for you?

Can you be addicted to a food? Is curry good for you?

I think I'm addicted to curry, like many people.

Is it possible to have an addiction to a certain food? Experts can't agree on this. Some say that foods such as Indian-inspired dishes are addictive because of the spices. Other say that it isn't possible to be addicted to a particular food.

Despite what the experts say, I think that many of us would admit to an addiction to certain foods. Is 'addiction' too strong a word? Maybe. And is curry healthy and good for you?

But as I've written before, spicy Indian-type foods are the most popular foods in England today. When English friends come here to the States to visit, it's normally only three or four days before they say that they must have some Indian food. In our household, this is at least a once a week meal. (When I say 'curry' I'm referring to a meal that is spicy and based on traditional Indian and Pakistani food. That's the traditional English way).

Experts do agree that people can become addicted to food itself and often, that addiction refers to foods that are known to be unhealthy. The good news for the Asian food addict - and I count myself as one - is that yes, it is good for you!

Why these meals good for you - spices

Many years before we had commercial medicines, the human race healed themselves of various ailments and illnesses using natural remedies. Many of these are accepted today by the medical profession as being extremely effective. Indian food uses a variety of herbs, spices and ingredients that are regularly proclaimed as being beneficial to health. Some of these refer to general health and others are being proved to be efficacious in relieving or preventing particular illnesses and ailments.

To get the maximum health benefits, use fresh turmeric - yes - you can buy it online! I've never been able to find this locally apart from once at the farmer's market - so it's simply easier to go online and have it delivered - and what a treat it is when it arrives.

Of course, any food can be made 'good' or 'bad' depending on the ingredients used and Indian and other Asian foods are no exception. Meals that contain lots of red meat and are served in rich and creamy sauces are obviously less healthy than vegetarian versions that don't rely on cream to thicken the sauce.

In England, as in many parts of the 'curry world' these meals are invariably eaten with wholewheat breads - chapattis, naan and so on. The traditional way is to break of a piece of bread, form it into a scoop and use it instead of a spoon or fork. This means that you get fiber with every mouthful!

Turmeric is used extensively in many Asian dishes. I get through a lot of it and that's good news, according to experts. Turmeric boosts the immune system and helps us to ward off infections and disease.In the UK, experts have long said that spicy foods are very effective in preventing colds and flu. It is also thought to fight off stomach upsets and infections.

Can it help prevent Alzheimers?

Many experts believe that it does ward off this frightening disease. Again, it is turmeric that helps this effect. Studies have shown too that people who eat Indian meals on a regular basis perform better in memory tests than those who don't.

This is just one reason why the recipes are considered to be an anti-aging food. In addition, it is an anti-inflammatory which means that it is helpful in other 'aging' conditions such as arthritis and stiff joints.

These meals are inexpensive

In fact, they are remarkable value for money, especially when you consider the amazing health benefits. I often make quick spicy meals using chickpeas, haricot beans or potatoes and the main ingredient. These are filling and tasty but very inexpensive too. Most vegetables that are great in curries are inexpensive, such as cauliflower, leeks and onions.

It is oh so convenient

Almost at any time, I can make a quick and easy Indian inspired from the store cupboard. I like to be sure of keeping tasty sauces in stock for when I need to make a quick dinner.And because there is no such dish as 'curry' you can create meals that suit your own individual tastes.

Curry definitely, without a doubt, is a great cure for a hangover. I have proved this time after time!In England, we do like a drink - or -two - or three - or more. Traditionally, after an evening of drinking in the local pub, people head for the nearest Indian restaurant. This is sociable, it extends the evening and it allows the rougher element to be rude to the extremely patient Indian waiters. But it does have the added effect of warding off a hangover the following day!

Make your own spice mix

Because to get the maximum health benefits from the spices, they need to be fresh.

You don't know how long that commercial spicy blend has been sitting on the shelf. In addition, many commercial blends and powders don't have the finest ingredients. In addition, you can make your own mixes powder to suit your tastes.This is the recipe that I use but adjust it if you need to - that's all part of the fun.

Cooking can be a curious mix of feeding yourself (and the family) and healing and health. We're all going to eat several times a day so why not make the most of it by eating foods that are good for you or that are tailored to your specific dietary needs? These books provide invaluable advice.

Healing Spices: How to Use 50 Everyday and Exotic Spices to Boost Health and Beat Disease
Buy Now 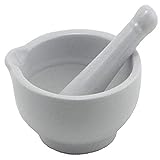 Although you can buy a huge variety of spice mixes, there are several reasons why you should ideally grind your own spices. You can adjust the spice mix to your own taste - for example, I like to have a higher proportion of ground pepper to many spice mixes.

You can also tailor mixes to include spices that you are particularly wanting to use for health reasons. What's more, making your own mix gives you better tasting food. Fresh wins every time.

You can use your grinder for so many other purposes too, making this a valuable addition to your kitchen.

Thanks for dropping by - please say hello!