Been craving a slice of pizza? Real pizza, I mean, not a pizza wannabe that tastes gluten-free. Did you know you can easily make a crust with a wonderful balance of chewiness, crispiness and homemade flavor that will satisfy your taste buds and even earn raves from people without dietary restrictions? Best of all, it's easy and quick to make. No finding obscure ingredients, no waiting for dough to rise, just delicious pizza in about an hour from start to eating.

A pizza crust mix based on a traditional Brazilian cheese bread is the key to this pizza magic. Learn all about it, what's in it, and my tricks for preparing it. I've served this to family and friends nearly every Friday night for over 6 years, so I've really got it down. You'll enjoy fabulous pizza again and feel great about serving it.

A wheat-free pizza eater's discovery of a delicious crust.

I was diagnosed with mild allergies to both wheat and corn in 1998 after several years of dealing with a lack of energy, and digestive problems. Three months of rapid weight gain led me to consult a nutritionist and an allergist. Years of unknowingly eating bread, corn-based cereals and all those products with high-fructose corn syrup had killed off the good bacteria in my digestive system and food was mostly just fermenting in there and eventually turning into fat. I had to make drastic dietary changes to get back to being able to digest normally and avoid potential thyroid problems.

I was at a loss as to how to completely revamp my eating habits, and scoured health food stores for replacements for my favorite meals. I ended up getting a pizza crust recipe from a friend with Celiac disease, but it was nearly tasteless and doughy in a not-so-appealing way. Even the best toppings couldn't save it.

Soon I moved to a city with a better health food store that stocked Chebe pizza crust in the baking aisle. It looked intriguing, so tried it once, and was hooked. My wheat & gluten-eating husband loved it so much that he declared Friday to be our weekly pizza night. Seven years later, we still look forward to starting off our weekend with Chebe pizza. I've served it to quite a few people who were unaware of my dietary restrictions, and all have commented on what a great pizza I make. They especially remark about the crust.

At right: an example of a baked crust

Chebe has changed the preparation instructions from when the product actually came out. Of course, following the instructions on the back of the bag the first time and then tweaking it from there is a great place to start.

Or, you can benefit from my years of Chebe pizza crust baking experience and try it my home-kitchen tested way instead:

Cast your vote for Tips on Pizza Crust Preparation

What Does Chebe Pizza Crust NOT Contain?

According to the manufacturer, it is FREE of the following: wheat, soy, gluten, corn, lactose/casein, potato, yeast, peanuts, tree nuts, and MSG 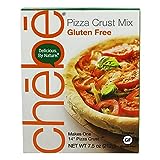 Variations on the crust

Other dietary restrictions? Some work-around tips.

Here are a few variations to the actual crust to further tailor it to your dietary needs:

Shredded soy cheese instead of parmesan:

Crust had a somewhat harder, crispier consistency. The soy cheese shreds don't incorporate quite as well, and can get a bit overcooked. Watch the amount of time in the oven.

* 3 Tbs. liquid gelatin. If dough is too dry, add water by the Tbs. until you reach correct consistency, or

* Use gelatin as above and also add 1 tsp. egg replacer mixed w/ 2 Tbs. of water, or

I've used vanilla soymilk almost exclusively instead of cow's milk, and it's been delicious. Rice milk would keep the consistency correct but might be a bit sweeter.

Another wheat-free, gluten-free variation to the crust:

For a subtle spicy undertone to the crust, add 1 tsp chili sauce with garlic to the crust mixture. You can usually find chili sauce in the Asian cooking section of your grocery store. The brand we've used is Hokan. A couple drops of Tabasco works too.

Get creative. Use these as a jumping off point to think of your own!

Divide prepared dough into 4 even pieces. Flatten each piece to around 1/8". Add filling on one side of piece. Fold over the other half and crimp the edges. Note: if dough edges get wet from filling it is hard to crimp. Be careful to mend any holes. Brush with olive iol. Bake for 20-25 min or until golden. Use whatever you want for filling...pizza filling, tomato sauce, sausage, etc.

Press the dough about 1/4" thick into ovenproof bowls (the mold), and bake for about 25 minutes or until golden. Remove from the bowl and pour in soup. For a harder bowl, bake at 425 degrees for about 20 min.

Flatten dough to the thickness of a tortilla. Place on a baking sheet and cut into bite-size pieces. Bake about 20 minutes at 375 degrees, or until lightly browned and crispy. Keep an eye on them in the last minutes. Store in an airtight container in the cupboard.

The backstory of Chebe Pizza Crust

The Chebe (pronounced CHEE-bee) line of products are based on pÃ£o de queijo, described by Wikipedia as

"small, cheese-flavored rolls, a popular snack and breakfast food in Bolivia, Brazil, Paraguay and northern Argentina. The inexpensive snack is often sold from streetside stands or by vendors carrying a heat-preserving container.

They are distinctive not only because they are made of cassava or corn flour, but also because the inside is chewy and moist."

Chebe's base of cassava (also known as yuca, manioc or tapioca) provides the perfect texture for pizza crust and better yet, is flavorful and can be eaten by people with gluten sensitivities and allergies to many common foods.

Here are my personal favorites, but it's your pizza. It's up to you to decorate it.

After much experimentation, my husband and I have our traditional pizza down cold. Here it is:

Cover the crust with Ragu homestyle pizza sauce then add mozzarella cheese. Add a layer of pepperoni, some green peppers, onions and black olives. Sprinkle with more mozzarella and parmesan.

The crust really does great with any toppings. Try BBQ chicken pizza, shrimp pesto pizza, or any other creative way to top your pie.

So what do you think about this pizza crust?