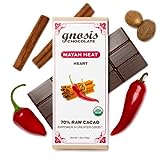 Vanessa Barg has developed what I would consider the world's best chocolate, bar none (pun intended).

Vanessa is a very personable lady, very sweet and friendly. She has personally exchanged emails with me a number of times, and makes me feel like a personal friend. She welcomes friends on Facebook, too. I have known her electronically for quite a few years, from back in the day when she still had a small facility.

The truth is, I have been a sort of chocoholic for a very long time. I don't get all kinds of buzz from it, and it doesn't elevate my mood. But I like its bitter taste; it just appeals to me for its own sake. When I was a child, my mother told me I was allergic to chocolate. So she could put some in the refrigerator for herself, and I wouldn't touch it. But when I got to college, she couldn't control me to that extent anymore; I was living halfway across the country. At that point, I fell madly in love with Mounds because I'm crazy about both chocolate and coconut. And coconut is another VERY healthy food! In fact, coconut oil is one of the BEST oils in the world. It can be used for frying, stored at room temperature for a year without going rancid, and is useful for restoring skin, helping you lose weight, and combating Alzheimer's. And that was about the way things went until I found Gnosis.

Vanessa started by having a small place that produced just a few chocolate bars, and from that she has expanded greatly, and now markets her chocolate in many different ways. For example, she puts them in some Whole Foods stores (unfortunately not in my city). And she has started selling on Amazion, as you can see.

Vanessa's chocolate bars are made from raw organic chocolate (and you haven't tasted chocolate until you have had it raw and organic, trust me). Chocolate is very, very medicinal if good quality. Most of the chocolate you buy in the store is pure junk, so if you want the medicinal value, you'll have to get your chocolate elsewhere. Chocolate is an excellent antioxidant. Lots of people put on weight because they eat lousy chocolate and don't watch their sweeteners. But Vanessa pays attention to things like that. And every single chocolate product contains one specific ingredient: Love! She puts her love of chocolate and people into her bars, and it shows.

At first, her bars were sweetened with agave nectar, but some people are concerned about this, so now she also sweetens with palm nectar, which I prefer. Some bars are available with your choice of either.

I have also sampled her truffles. Nice!

Vanessa likes to put fruit and other interesting things in her bars. I personally prefer them without fruit, but if you like a little fruit chunks in your candy, you can readily experience them.

She also puts various medicinal things in some bars. This can include antioxidant spices such as turmeric (yum!), and as in this bar, cayenne. Cayenne is one of the most versatile spices. It is very good for improving circulation. It can also stop hemorrhage. You can apply it directly to a wound (which stings for awhile) or take it by mouth. I carry cayenne with me in case I am ever in an auto accident. If placed on a wound, it tends to draw it shut, and helps healing. Cayenne is also a favorite seasoning in many cuisines, and was probably used because it tends to preserve food that you cannot refrigerate for some reason (such as not having access to a refrigerator or ice). This product contains cayenne, and a couple ingredients that help make the bar sweet (does not include any of the above-named sweeteners).

She had an unbelievable variety of flavors, all very good. And she sells raw chocolate by the pound if you prefer to make your own, but personally I don't advise it because I can't imagine anybody can make it better than she can!

This product is the closest I could come to my favorite chocolate bar from Vanessa's web site, Gnosis Chocolate. My favorites are Madagascar, Grenada, and Bali. Sometimes I can get them in a variety pack. If not, I just buy Madagascar. It has black pepper in it, and I like the little "kick" in the flavor.

The chocolate is pricey enough I can only have it as an occasional treat. If I could afford it, I'd eat one every day. You might call this the product I can't live without, but until I can afford one a day, I guess I have to. :(

But if you are a chocoholic, your pocketbook will hate me if you try one of these. Guaranteed! 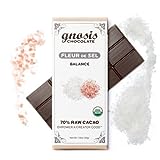 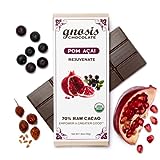 Gnosis Pom Acai Bar - raw chocolate
I've tried this and it's very good. Mostly, I would prefer not to "recognize" fruit chunks, but if you don't mind, and you like these wonderful fruits, you'll like this bar.
Buy Now 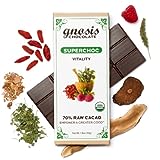 Have you ever had Gnosis Chocolate?