Elyn spent the last 30 years in China, coming home in the summer to cook American food and have fun doing craft projects with her family.

Some people love tomatoes. Some people don't. I am someone who doesn't like tomatoes, so I have been working on Green Spaghetti Sauces so I can enjoy the fun on top of spaghetti too!

Here are two versions of sauces I like a lot, and I hope you enjoy them too. They both have really healthy ingredients, one that will help your kidneys and another one that should help lower your blood pressure. But maybe it is best not to think of them along those lines first. They are just tasty sauces that you will enjoying as a change from tomato sauce on top of your pasta and spaghetti. I hope you like them!

(All images are by Elyn MacInnis)

How to prepare the garlic - so that it is tasty but doesn't set your mouth on fire!

The trick is crushing the garlic with some salt until it is liquid. Take whatever amount of garlic you need, and smack it with the side of a knife. Let it sit 15 minutes. This brings out all the compounds that are good for you. Then peel it, and put it through a garlic press or chop it finely. Add to a bowl or a mortar and pestle. Add a big pinch of salt per two cloves of garlic, and start grinding it with a spoon until the salt is mixed in and the garlic is basically liquid. This takes the fire out, but preserves the flavor.

If you love veggies you need a good peeler

When I was young I just used our ancient family vegetable peeler. It worked, but the blade was so dull. After I moved away from home I had to get a new one, and was I glad! Peeling is so easy if your peeler is sharp. Don't frustrate yourself... get a new one if your old blade is dull. 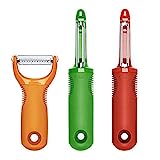 Cilantro - Hate it or love it?

Why do some people hate cilantro?

Some people really dislike cilantro. Julia Child was one of them. But in China and in Latin America, it is very common to find cilantro in food.

Brain scientists think that a large part of the problem is that some cultures never use it, so people just aren't used to the flavor. Some scientists think it is genetic. But flavor chemists have found certain compounds in cilantro that are fragments of soap molecules that have been modified, and that is why some people feel it tastes a little like soap.

Is there a solution? Yes!

Japanese scientists have found a good solution - if you crush the leaves the soapy flavor will gradually fade as enzymes in the leaf alter the molecules to flavorless substances. Perhaps this is why this cilantro green sauce is so delicious!

It may have a strange smell, but brain scientists have studied that as well, and claim that if you keep eating it, over time your assessment will change. Frankly, I never thought I would like cilantro, but after many years of bumping into it in Chinese food, I have indeed begun to like it. So you never know! It is in fact a wonderful herb.

~ has antibiotic properties and can combat the bacteria that causes cholera.

~ has been used to treat insomnia and anxiety.

~ It is used as a digestive aid, and also as a diuretic.

~ Coriander has been used traditionally as a treatment for diabetes.

Basil Pesto is traditional, and basil is a fantastic herb that almost everyone likes. Adding parsley gives this green sauce an extra boost nutritionally. You need to try it in order to understand the beauty of the pairing.

Parsley is SO good for you!

Why you want to eat parsley

Did you know that parsley fights cancer?

Myristicin, a natural compound found in parsley, inhibits tumor formation, especially in the lungs, is an anti-oxidant, helps neutralize carcinogens in cigarette smoke, and helps the body fight off colon and prostate cancer.

Myristicin is not the only antioxidant in parsley. There are others, including lutolin, a flavonoid that also promotes carbohydrate metabolism and is a good anti-inflammatory.

Two tablespoons of parsley has 16% of the RDA for for vitamin C and 12% of the RDA of vitamin A.

Vitamin A is critical to keep your mucous membranes healthy, which will keep you from getting colds and flu. It also helps build the lining of your eyes, urinary and intestinal tracts.

The folate king, Parsley, like Cilantro, with its great store of folate (vitamin B9) will convert homocysteine to harmless compounds. Homocysteine is an amino acid that you have in your body naturally but if you have too much of it, it can encourage plaque formation in your arteries and veins. Persley and cilantro both can help in the fight against cardiovascular diseases, heart attack, stroke and hardening of the arteries.

A simple two tablespoons of parsley has 153% of the RDA for vitamin K. Vitamin K is critical for strengthening our bones. It also prevents calcium build up in the body's tissues which can cause hardening of the arteries and affect the heart.

Green add-ins - Straight from the fridge

With a simple White Sauce, you can make all sorts of things!

Have you ever considered just making a simple white sauce and then adding in green veggies straight from your fridge?

The simple white sauce for pasta is made from flour, oil or butter, and milk or other liquids. It doesn't have to be made with milk, but can be made from soup broth, or a bouillon cube dissolved in water. You don't have to use butter if you don't like the flavor, but can use oil instead.

This photo is of what I had for dinner - spinach in white sauce with a little salt, pepper, and nutmeg over penne. It was delicious.

If you aren't familiar with "white sauce" - here is a recipe:

Heat the oil in a skillet. Turn it off. Add in the flour and stir until there are no lumps.

Add in 1 cup of liquid of your choice. Milk, half milk and half water and half bouillon, or all bouillon.

Stir in until all lumps have disappeared. Then heat, stirring, until the sauce thickens. Then you can add your green ingredients. After your have added everything check the sauce for thickness. Too thick can be cloying - you can add water to give it just the right consistency for you.

What can you add to your white sauce to make it Green!

An avocado, chopped finely, with garlic and basil

Small pieces of green peppers, with a splash of cream

Green olives and some chopped peppers

A big handful of your favorite herbs

Like olives and herbs? - This one is for you!

A tangy olive and herb sauce for people who like deep flavor in their green sauce.

Other recipes for people who can't eat tomatoes!