Healthy Scottish Recipes? Is that a Joke?

I will concede that it is not for our culinary abilities that we Scots are best known. Statistics show Scotland to be in perpetual competition with the USA for being the designated heart attack capital of the world - a title which no country desires. This is in no small part down to diet.

This is of course, however, a wide-sweeping generalisation and although a great many people do favour deep fried, greasy food and sugary snacks and drinks, it does not naturally follow that there is an absence of good quality healthy and traditional Scottish recipes to be found, just like the Smoked Haddock Chowder (pictured above) which I had for lunch today, prior to writing this paragraph! I will endeavour on this site to convince you of the worth of that claim...

There can be little doubt that haggis is the first thing people generally think of when they think about Scotland and food. There seems to be a general concensus of opinion that all Scots eat haggis on a regular basis and that it is some form of staple diet in Scotland. The reality could not be further from the truth.

I can honestly say that I have never in my life known anyone who I could say ate haggis on what - by any stretch of the imagination - I could class as being a regular basis. It is of course widely available at all times but in general it is most commonly eaten at events such as Burns' Suppers and St Andrew's Day Celebrations.

What is Haggis and How is it Made?

Mince an' Tatties - or Tatties an' Mince as some may prefer to call it - is a very popular dish in Scotland. Unfortunately, the way in which it is normally prepared is not strictly in keeping with the healthiest of eating regimes. The potatoes are often drowned in an excess of melted, full-fat butter and a horrendous, chemically enhanced dried gravy powder is generally added to the mince. This is my attempt at getting Scots to eat a healthier and much tastier version of a cultural classic.

The following recipe is for two people.

Pinch of fresh or dried thyme

Put the minced beef in to a large, non-stick pan and bring it gently up to heat, stirring frequently with a wooden spoon. This will allow the natural fats within the beef to provide the only fats necessary to prevent the meat from sticking or burning. Brown the mince all over before adding the onion and garlic. Cook for another couple of minutes, continuing to stir frequently.

Add enough boiling water to the mince to cover it, then add the thyme and carrot. Bring to back to the boil then reduce the heat to achieve a gentle simmer.

Peel the potatoes, cut them in to chunks and place them in to a pan of lightly salted boiling water. Boil gently for twenty-five minutes. Drain well and return them to the pan with a small knob of butter. Mash them carefully and well.

Arrange the mashed potatoes on each plate as shown and then carefully, with a slotted spoon, add the minced beef on top.

This remains a traditional Scottish Mince and Tatties recipe - but with some of the calories and the chemicals removed!

Traditional Scottish Recipe Cookbooks - The recipe(s) you seek must be here somewhere! 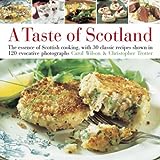 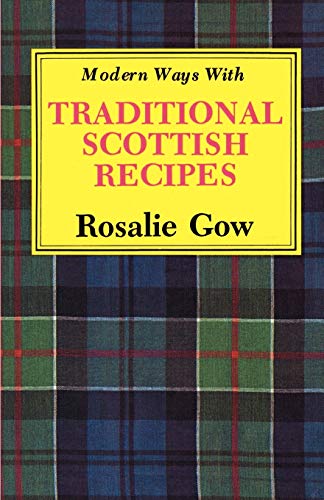 Stovies is an ancient Scottish recipe traditionally prepared by the servant classes from the remnants of their masters' meals. The servants would rescue the remnants of the meat - be it beef, mutton or lamb - from the leftovers and stew it with potatoes and onions in the fat of the meat and some stock for their own consumption. My version of the recipe is similar to the traditional but a little more geared towards healthy eating in that I have omitted the fat, or "dripping," of the meat.

1 large potato (un-peeled and cut in to chunks)

Partly cook the potato chunks by boiling them in salted water for about ten minutes. To a large pan, add the olive oil and bring up to a gentle heat before adding the lamb to brown. Add the hot chicken stock and season with pepper only. Bring up to the boil then simmer for fifteen minutes before adding the potato and onion. Simmer for a further twenty minutes.

Stovies were often served with oatcakes but I like mine with a bread roll which I use to soak up the delicious stock.

This is a slightly different version of Stovies, made the way my Gran often used to make it. Instead of using the remnants of a roast, Lorne sausages, a type of sausage peculiar to Scotland, are used instead. Water is used instead of stock and a pinch of dried thyme or sage added.

The method and ingredients are otherwise precisely the same as above.

This is a simple recipe which one can easily imagine nineteenth century - and even earlier - Scottish women cooking in a big pan on the hearth. It is a simple stew, full of fresh, one hundred percent Scottish ingredients, but it is equally - or perhaps consequently! - delicious.

Brown the beef in a large stew pan. This should take a couple of minutes. Add the hot stock and bring to a simmer. Continue to simmer for one hour.

Add the vegetables, bring back to a simmer, and cook for a further half hour. Season only at this point and serve steaming hot in bowls.

Whenever you have finished your healthy Scottish recipe meal - of whatever description - the chances are that you will be looking to sit back and relax for a while. Perhaps you wish to sit on at the table, or even put your feet up and slouch in front of the TV. Whatever the case may be, a traditional Scottish beverage sounds like the order of the day and what better in such circumstances than a Gaelic coffee.

Gaelic coffee is simply coffee, sugar, cream and single malt Scotch whisky, combined in a delicious and satisfying fashion. The link below explains how to prepare this beverage in great detail.

How to Make Gaelic Coffee

Traditional and Healthy Scottish Recipes - What other ones are available around the Web?

Thank you for your visit to this site. I very much hope that it has helped to give you a greater understanding of Scottish cookery and also what Scotland is truly all about.

I would appreciate it if you have a moment to leave any feedback you may have in the space below.