Loraine, wife, mother and grandmother shares favorite family recipes. Most are easy to make, 'cause she doesn't like to stay in the kitchen.

To make a great apple pie, or any pie for that matter, you have to have a great pie crust. After you try this pie crust recipe you'll never use any other, I promise you. This is truly a "no-fail" pie crust recipe.

There is probably no dessert that says "American" as apple pie. Years ago, about 1956, a neighbor gave me a "no-fail" recipe to make pie crust, and since apples were usually plentiful, I started making apple pies.

In this article I am going to share with you the "no-fail" pie crust recipe and also my vintage recipe for making apple pies.

I have to admit that if you are watching your weight, you'll want to make sure there are others around to help you eat it. You don't want to be left alone with this pie or you might find yourself eating the whole thing. And since it tastes extra great with ice cream or whipped topping, you'll want to have that around to serve with your homemade apple pie.

The best and easiest pie crust you'll ever make.

Mix flour and salt. Cut into the shortening.

Add to the flour mixture and stir with a fork until mixed together.

Form into four balls. Cover and place in refrigerator for about 30 minutes. This makes the dough easier to handle.

After rolling out the top crust. cut slits to allow steam to escape. Place top pie pastry over apples. Brush milk over the crust and sprinkle with sugar. Bake @ 450 degrees for 10 minutes. Then reduce heat to 350 degrees for 40 minutes.

A beautiful and tasty pie to serve to your family or friends.

Help for Peeling and Slicing Apples 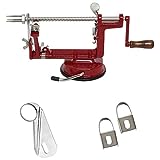 Johnny Apple Peeler with Suction Base VKP1010 + (1) Additional Coring & Slicing Blade VKP1010-2 + (2) Additional Peeling Knives VKP1010-1
Canning applesauce, dehydrating apples, freezing apples or peeling and slicing for snacking: All of these are great reasons for having an apple peeler. I like to make apple pie filling to freeze. So, I like products which make the job of peeling and slicing apples as simple as possible. If you have your own apple trees, or have to do as I do and buy apples when the price is low, you’ll really get a lot of use out of an apple peeler. When I freeze apple pie filling, I mix the apples, sugar, flour, cinnamon and nutmeg together. Then I put the mixture in plastic bags, and freeze them flat. When ready to make a pie I only need to make the pie crust and fill with the prepared apple mixture. I’ve also made the apple pies, up to the point of making slits in the top crust and brushing on the milk and sprinkling it with sugar---that has to be done just before baking. These frozen unbaked pies are great, especially when you are pressed for time. The apple peeler: great product for saving time.
Buy Now

Will You Try This Apple Pie Recipe? - or leave a comment.