The Basics of a Full Scottish Breakfast

A full Scottish breakfast is similar in principal to the much more widely acclaimed full English breakfast. The differences are in a couple of the component parts, which are creations fairly unique to Scotland. The principal drawback with traditional English or Scottish breakfasts is that they are very often cooked using lard (rendered pig fat) which is of course believed to be extremely detrimental to our health. What I have done in this respect, therefore, is use sunflower oil throughout the frying process, which is widely considered a much healthier option.

The Ingredients in a Full Scottish Breakfast

Starting at the top left and moving round in a clockwise direction, we have bacon, tattie scones, lorne sausage, egg, black pudding, onion and tomato.

Tools and Implements for Cooking a Full Scottish Breakfast on Amazon.com 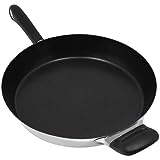 I am of course aware that it is a much healthier option to grill the sausage, black pudding, bacon and tomato, as opposed to frying them as I have done on this occasion. The one and only reason why I have chosen to fry rather than grill is that this is the more traditional method of preparing a full Scottish breakfast and the one which I wished to demonstrate. Please do grill the aforementioned ingredients where possible and in such an instance, only one frying-pan will be required.

To prepare a full Scottish breakfast in the fashion described below, you will require two frying-pans (one of which at least should be fairly large,) a spatula or turner, a small bowl or cup and a little sunflower or vegetable oil in each pan.

The first step to cooking a full Scottish breakfast in this manner is to add a little oil to the largest frying-pan. It is important to bring the oil up to a moderate heat before adding any of the ingredients - otherwise the food will soak up the cold oil rather than start to cook the moment it is added to the pan.

As the Lorne sausage and the black pudding will take longest to cook, they should be added to the pan first. Both of these items are sliced from larger blocks, so their thickness will vary and thus their required cooking time. On average, they will take about three minutes each side. Note also that although the black skin which encases the black pudding is usually made of plastic and inedible, it should be left on during cooking and only removed later, otherwise the black pudding may very well begin to disintegrate during the frying process.

When the Lorne sausage and black pudding have been turned, the bacon medallions or rashers should be added to the frying-pan. The tomato should be halved and also added, flesh side down. The bacon should be turned after about a minute to a minute and a half.

Very often, onions will be served as part of a full Scottish breakfast which have been fried for so long, they are shrivelled and dry. My preference is to have the onions only slightly cooked and I therefore add them to the pan briefly only, after the bacon has been turned. If the bacon shows signs of becoming over-cooked during frying, it can be placed on top of the sausage and black pudding as shown, where it will largely stop cooking but be kept warm.

Note: The egg frying process should be started just before the bacon is added to the first frying-pan.

There are a great many talented cooks who have never mastered the relatively simple process of frying an egg. This is for the reason that however straightforward the task may appear to be, there are several stages of the process which can prove ultimately disastrous if not approached and executed in the correct fashion.

So what are these common errors?

It is important to add only a little oil to the pan in which the egg is to be fried. Otherwise, the liquid egg will simply spread out in to the excessive liquid. Similarly, if the pan is not brought up to a high enough heat before adding the egg, the egg will again start to spread out rather than immediately begin to cook.

Breaking an egg straight in to the frying-pan will work perfectly on many occasions. In order to eliminate the risks of shell getting in to the pan, however, and to ensure best final presentation, it is recommend that you firstly break the egg in to a small cup or bowl and then gently and much more easily deposit it in the pan.

Once it is in the pan, the egg should simply be left alone. There is no need to tilt the pan and splash an excess of oil and grease over the top of the egg. When the egg can be seen to have started to cook and is no longer in significant danger of losing its shape, the heat should be reduced under the frying-pan to prevent the egg cooking unevenly and becoming over-cooked underneath while the yolk remains raw.

Although tattie scones can be prepared from scratch to be served as part of a full Scottish breakfast, it is far more common for them to be made in advance or purchased in advance and simply re-heated. The tattie scone should be added to the pan just after the egg and fried for a minute or so each side until the egg is ready.

It is often a great source of amusement for me - and no doubt for many other Scots - when I browse the Web for traditional Scottish recipes. The number of dishes which I have come across in this respect - touted as absolutely authentic Scottish recipes - which I have never heard of, and nor has anyone else whom I have asked, is staggering. I have no doubt that this is the case with many countries around the globe when a foreign national attempts to emulate their recipes and cooking techniques and anyone attempting to do so would therefore be well advised to proceed with extreme caution...

4.6 stars from 5 ratings of this full Scottish breakfast recipe!

What do you have for Breakfast?