How to Make Stovies

There is No Specific Recipe for Making Stovies

Learning how to make stovies is not about learning and following a specific recipe. It is probably better to describe stovies as a concept, rather than a specific dish. The reason for this is simple in that the ingredients included in stovies and the way in which they have evolved over a period of centuries means that no one way can say with absolute certainty how they were originally made. The original ingredients are largely about conjecture, with only the concept established as fact.

The History of Stovies

Stovies have been made in Scotland for centuries. They were originally very much a poor man's food, prepared from the leftovers passed along by the lords and masters. When the wealthy had been fed their beef or lamb, the fat which had dripped from same ("Dripping") and the stock would often be given to the servants in order to feed their own families. The likelihood is therefore that the very first form of stovies consisted merely of dripping, stock and potatoes.

If the masters were generous or the servants were merely lucky, on occasion some of the leftover meat would be provided, along with the dripping and stock. This meant that a far more nourishing and substantial meal could of course be made in the same fashion, simply by adding the meat to the dripping, stock and potatoes.

In those earliest days of stovies, the only other ingredient which came to be commonly used was onion but in the past century in particular, stovies have often taken on an almost unrecognisable form...

Scottish Recipes for the Twenty-First Century 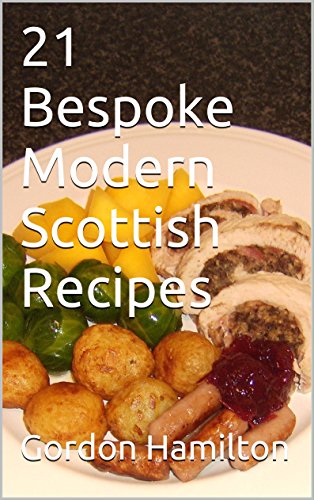 21 Bespoke Modern Scottish Recipes (21 Bespoke Recipes Series Book 4)
Looking for authentic Scottish recipes more in keeping with the present times? This fabulous new bargain e-book looks at a range of foodstuffs popular in Scotland today and some innovative new ways to prepare, cook and serve them. Every recipe comes with accompanying photograph(s) and they include Scottish Smoked Venison and Warm Peach Salad, Balmoral Turkey with Traditional Christmas Trimmings, Irn Bru and Macaroon Bar Mini Scottish Trifles and 18 more! Why not download your copy today and grab a taste of modern Scotland for your family?
Buy Now

Stovies Made with Lorne Sausages

The way my Gran used to make them

There are no complicated ingredients in this version of stovies. All that we require are the following:

This is a casseroled version of stovies

In order to prepare these casseroled Lorne sausage stovies, the first step is to put the oven on to preheat to 375F/190C/Gas Mark 5. The onion and the potatoes should then be thinly sliced to between 1/8" and 1/4". The Lorne sausages should be halved, diagonally.

The sausage pieces and the onion slices should then be arranged alternately on the bottom of the casserole dish and the herbs and seasoning added. The potato slices should then be added as a top layer, before the hot stock is carefully poured over, the lid put on to the casserole dish and the dish placed in the oven for forty to forty-five minutes.

Lorne Sausage Stovies, Ready for the Stock and then the Oven

How to Serve Lorne Sausage Stovies

How to serve Lorne sausage stovies - or indeed any form of stovies - is up to the individual. As the dish already includes meat, potato and vegetable, however, there is no real requirement to serve it with anything else. It is perhaps best served simply by being spooned from the casserole dish on to a plate - and as I have done below, adding a little HP Sauce as final seasoning.

I hope that this page has given you some greater understanding of the traditional Scottish dish that is stovies. If you have never tried preparing stovies, I hope you will now try them for yourself and let me know what you think in the space below.