We all fix food and have our favorite meals to prepare. I'm sharing some of mine. Have fun cooking!

French Influences on Cooking in Maine

My mother-in-law passed along to us some of her tried and true recipes. She spent her early childhood in Tetford Mines, Quebec and even though she spent her whole adult life in Sanford-Springvale, Maine she still spoke with a slight French accent. Betty was the Americanized version of her name.

New England is noted for it's blanket of snow that makes postcard pretty scenery, but also creates hearty appetites after the hard work of shoveling all that snow from the driveway. Here are some of her recipes that we turn to when we want some downhome warming meals. They include seafood since Southern Maine runs along the coast.

Her menu also featured budget-friendly meals like New England boiled dinner or the American chop suey which uses pasta and hamburger. The French influence showed up in crepes for breakfast (with real maple syrup, of course).

The photo from 1948 shows Betty serving Christmas dinner to her husband and her father-in-law with the baby nearby in the highchair.

My husband grew up eating this in Maine and I often saw it advertised with the church suppers there. So this recipe is handed down from my Franco-American mother-in-law. It's more Italian ingredients than anything else, but it makes a tasty, warming meal.

You could use other shapes of pasta like penne pasta or pasta shells. I've heard of making this with tomato soup, but we always liked the chunky version with the chopped tomatoes. You can add green peppers or leave out the onions.

My husband says his mother made tourtiere (pork pie) which they would eat topped with mustard and also cretons. The cretons was spread on toast to eat for breakfast. Watch the video then you'll be making cretons too.

Betty often served them fresh in a bowl with some milk over them.

If you can't pick your own blueberries, try some of these.

Betty and her husband Alban would go to Blueberry Hill to pick wild blueberries each summer. There are many recipes to use blueberries (muffins, pancakes, cakes, etc.). They are also good in a bowl with some cream or milk.

I was amazed that you can even buy blueberry plants from Amazon. We have 10 plants growing in our side yard and it is a treat to stroll out and pick your own fresh blueberries.

It's Fun to Pick Your Own Blueberries

Plant Them in Your Yard - They Produce for Years 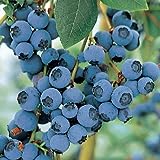 Blue Crop Blueberry Plant - Large/Delicious/Midseason - 2 .5" Pot
I have a dozen blueberry plants in my yard. It's recommended to have several different kinds so you can have early, mid-season and late ones to pick. This one is a strong growing plant that has large clusters of berries. I've been very pleased with it. You pick these mid-season. For me, in Central New Hampshire, that means August.
Buy Now

Whip cream in large bowl until it peaks. You can't use Dream Whip for this, it has to be real cream. Gradually fold in chocolate syrup until it becomes a nice chocolate flavor.

In a 9x9 inch Pyrex dish, coat bottom of dish with cream mixture. Spread the chocolate whipped cream mixture on one long cracker. Coat a second one the same way, then stick the covered side to the bare side of the first cracker. Continue adding crackers until there are enough to stand on their sides and it forms a good-sized rectangle.

Use the remaining chocolate whipped cream to cover all sides and the top of the combined crackers. Cover this so it won't dry out in the refrigerator. Place in refrigerator overnight.

When serving it, slice it on the diagonal so each slice shows the many layers of crackers. The whipped cream will have soaked into the crackers overnight.

This warming and hearty chowder is served all across New England. There's nothing like it to warm you from the inside out. Snowy days mean clam chowder for lunch. Even chill days in spring and fall, we have clam chowder.

Betty made crepes for breakfast for her two boys and husband. Now on special occasions, her son makes them for us. He remembers his grandmother making crepes for her husband who defied his wife by putting maple syrup on them. Since he was diabetic, this was a no-no.

De Buyer Crepe Pan, Blue Steel, Made in France, 8-Inch Cooking Surface, 9.5-Inches Rim to Rim
Sure you can use an ordinary frying pan, but if you want to make your crepes with flair, get a special one like this. We find it just the right size and it heats evenly.
Buy Now

My husband remembers his grandmother making crepes for breakfast when he visited. They poured maple syrup over them.

When we visited his great-uncle in New Brunswick, Canada, a second cousin presented us with a bottle of their homemade maple syrup when we left. What a treat that was.

Where Does Maple Syrup Come From?

Some Franco-American families in Sanford say they had these, but my husband says his mother never made them. We saw these available in New Brunswick in a very few places. Apparently they are very laborious to make. The women would gather before a holiday and spend a day grating the potatoes and preparing these.

Do not confuse Poutine Rapee with Poutine which is french fries with cheese and gravy on them. We saw these fairly commonly on menus in New Brunswick in the Acadian areas, but I've not seen it in Maine where French Canadians immigrated.

Gear for Cooking and Eating Lobster

Granite Ware Seafood/Tamale Steamer with Insert, 15.5 Quart, Black
We have 4 of these big granite ware pots at our summer cottage. If it is just us having lobster, one pot is enough to steam two lobsters. If we ask all the neighbors over for a lobster fest, we use all the pots. We have a two-burner stove on our deck that's fast in bringing these to a boil. We also use the side-burner on our regular BBQ grill and a neighbor brings over their grill too so we use all 4 pots. That way, about a dozen people can have lobster all at once.
Buy Now

Hot Butter Is Imperative for Lobster

Oggi 2-Piece Butter Warmer Set with Stainless Steel Stand
You can heat the butter on your kitchen stovetop (NEVER use a microwave) and then pour the butter into small ramekins. On a cool evening, this doesn't keep the butter hot for long, so I recommend these stands. With just a votive candle, they keep the butter from congealing. I had some larger ones that used cans of Sterno, but like these smaller ones better.
Buy Now

Here's My Advice on Holding a Lobster Fest

Not sure how this got it's name, but it is called this in the French Canadian community. It is similar to what is called shepherd's pie in England.

Brown the ground beef and onions together, then drain off the oil. Add salt and pepper. Put this in a cassarole dish. Boil the potatoes and mash them with butter and milk.. Spread the creamed corn over the top of the ground beef. Top it with the mashed potatoes. Bake in the oven at 350 degrees for 45 minutes. The potatoes should take on a golden, toasty color with some browning. Let stand for 10 minutes and serve.

England has a similar dish and it's called shepherd's pie. My husband makes this recipe and it always brings back memories of his mom.