Answering the Burning Question: What's the Difference Between a Slow Cooker and a Crockpot?

I Always Thought Crockpots and Slow Cookers Were the Same Thing

But apparently they're not. Or not exactly, anyway.

As I was perusing Facebook posts yesterday, I saw a link to this crockpot candy recipe, which makes a distinction between the two types of appliances.

But nearly every ad or recipe I see for a crockpot also uses the term "slow cooker." So what gives? I decided to look into this conundrum a bit further.

Do YOU Already Know What the Difference Is Between a Crockpot and a Slow Cooker?

Be honest ... do you already know the answer?

What Exactly IS a Crockpot?

It cooks slowly, so it's a slow-cooker, right?

A crockpot (aka "crock pot" or "crock-pot", take your pick) IS a slow cooker. BUT ... pregnant pause for drama ... not all slow cookers are Crock-Pots. (Note the change in how I wrote that. Foreshadowing....)

Originally, the term "Crock-Pot" -- capitalized and with that little hyphen stuck in there -- was coined and trademarked by the Holmes Group of Milford, Massachusetts, under their Rival brand and used for a line of their slow cookers. So insert the little ® sign after the name Crock-Pot.

But THEN, just as Kleen-Ex and Xerox have become so commonly used as to seem like the actual, generic words for tissue and photocopy, the Crock-Pot® name became the term -- as crockpot, crock pot, and crock-pot -- that recipe-writers and the general public used interchangeably with slow cooker. And it became acceptable.

This is why, though, you don't see other companies, like Hamilton Beach for example, calling their slow cookers "Crock-Pots®" (or crockpots or crock pots). It's one thing if Joe and Joanne Shmo use the term, but if used for another slow cooker brand, Rival wouldn't have been too happy and would probably have had their attorneys file the ol' trademark infringement lawsuit.

The Rival brand now belongs to Sunbeam Products, a subsidiary of Jarden Corporation, so now you'll see the "Crock-Pot®" name on their slow cookers, too. 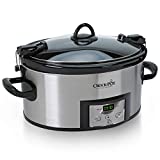 One of the slow cookers with the trademarked name

The 6-quart capacity is perfect for seven or more people or a 6-pound roast.

Read about the Crock-Pot Brand

Then What Exactly IS a Slow Cooker?

So, now it's pretty clear (I think) that "slow cooker" is the general term for a stand-alone electrical appliance with a heating element and a ceramic or porcelain pot inside an outer casing.

Slow cookers maintain a relatively low temperature for many hours, compared to other cooking methods like broiling and baking, and are safe to leave unattended for hours, so you can go to work, go to bed, or go out to play for the day while your meal cooks. Sloooowly, of course.

If you're really interested in learning more about slow cookers in general -- their history, design, operation, advantages and disadvantages -- this slow cooker article on Wikipedia is as comprehensive as any I've found.

And Here's a Slow Cooker

Note that the product title doesn't include "Crock-Pot." But of course it does the same thing.

Does It Really Make a Difference Which One You Use?

A slow cooker or a crockpot (or Crock-Pot), that is

WELL ... According to Donna Brown, who posted that crock pot candy recipe (also known as "Mr. Bud Candy") and got me agonizing about the difference between crockpots and slow cookers, "This recipe is for a crockpot which, when on low, will only melt the ingredients. A slow cooker will get hotter and start to cook the ingredients, thus resulting in an inferior product."

Hm, nothing I'd read thus far, other than Donna's statement with the candy recipe, said anything about Crock-Pots® (and, see, now I'm using the OFFICIAL trademarked name) being hotter than other slow cookers. In fact, Donna doesn't seem to be referring to the specific Crock-Pot® brand at all but rather making a distinction between the terms "crockpot" and "slow cooker," which I don't believe is accurate.

In More Crockpot Information -- Become a Slow Cooking Pro, by Linda Larsen, she states, "The newer [crockpots on the market] seem to be hotter than models only a few years old, so it's best to learn how your particular crockpot cooks."

So here, then, is what I think. Ready?

I say, there really IS no difference between a crockpot and a slow cooker, but different brands and models may cook at different temperatures when comparing their low settings to low settings and high settings to high. So the first time you cook something in your slow-cooking crockpot (which may actually BE a Crock-Pot®) that is a bit sensitive to burning -- like Donna Brown's crockpot candy -- you'll have to keep a closer eye on it than you normally would when using a slow cooker for other foods that are more ... well, easy-going.

And I'm now going to completely ignore Lisa Weinstein, who says there really is a difference between a crockpot and a slow cooker. SHE says, "a slow cooker is a pot, usually made of metal, which sits atop a heating surface. With this type of slow cooker, sometimes the pot can be removed and the heating surface itself used to fry foods." She says that a crockpot, then, is a TYPE of slow cooker with a stoneware pot that sits inside a surrounding heating element.

Do You Use a Crockpot or a Slow Cooker? Or wait, they're really the same ... aren't they? I'm so confused!