The Isle of Islay is world renowned for the quality of the single malt whiskies it produces. There are presently eight working whisky distilleries on Islay, producing a range of whiskies of different strengths of flavour. There are the peaty whiskies from the south of the island produced at Laphroaig, Lagavulin and Ardbeg, the milder whiskies of Bruichladdich and Bunnahabhain and the middle of the range from Bowmore, Caol Ila and Kilchoman.

This page will feature pictures and specific details from five random representative examples of whisky distilleries around Islay, including an in-depth look inside Bowmore Distillery from the perspective of a visitor's guided tour. 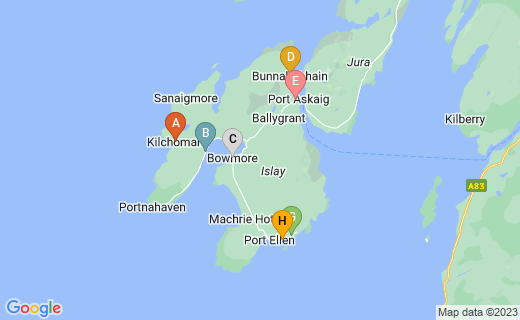 Bruichladdich distillery is located right on the shores of Loch Indaal - the sea loch which bites in to Islay's south-west coast - and the vicinity affords beautiful views out across the loch. The only larger ships which enter Loch Indaal are cargo vessels en route to Bruichladdich pier. The distillery is easily reached by road with the main A847 Bridgend to Portnahaven road actually passing right by its front door.

Bruichladdich whisky is traditionally unpeated and very mild in flavour. The distillery is presently producing, however, two heavily peated whiskies - Port Charlotte and Octomore - in addition to its established range, which are actually two of the peatiest whiskies presently produced on Islay.

Unusually for a whisky distillery, Bruichladdich also produces the only gin distilled on Islay, The Botanist, which is much acclaimed by gin drinkers.

Bunnahabhain is the most northerly of Islay's whisky distilleries, found a mere couple of miles from the northern tip of the island. It is located on the Sound of Islay, the treacherous stretch of water which separates the Isles of Islay and Jura, affording magnificent views out across the sea and on to the neighbouring island. The distillery and village are reached via a narrow road off the main A846 near Port Askaig and there are a couple of points on this undulating road where it is possible to stop and admire the truly magnificent scenery from a height.

Bunnahabhain is another distillery which produces very mild flavoured whiskies, devoid of the peat found in the whisky produced by many of the distilleries further south.

While there are a great many Islay single malts which fit easily in to anyone's budget, there are equally more than a few Islay whiskies the price of which will have you reeling.

The photos above show firstly a variety of single malts for sale in the Spar shop on Shore Street, Bowmore, with prices reaching £750 for a bottle (over US$1,000).

If you are keen to taste before you buy a bottle - or simply taste - the fourth picture shows part of the gantry at Bowmore's Lochside Hotel. The hotel has more than three hundred single malts available to sample, again at a wide range of prices. There are, however, tasting notes (including prices per dram) available for you to peruse prior to ordering.

Startling as the prices of some of these whiskies may be, the even more surprising reality is that in certain company, they can represent but a mere drop in the ocean...

The World's Most Expensive Whisky - Bowmore 1957

If you are a Texan oil billionaire, a rock 'n' roll megastar or a multiple lottery winner looking for an extra special dram of Scottish single malt whisky, you may want to consider Bowmore 1957. There were only twelve bottles of this ultra special whisky produced and the retail value is a cool £100,000 (one hundred thousand Pounds Sterling), or approximately $150,000. The bottle shown above was photographed in its display case at Bowmore Distillery and it was an almost indescribable, reverential experience, gazing on an apparently everyday object that holds such incredible value.

Bowmore 1957 is of course a whisky likely to be purchased by collectors, rather than anyone with the intention of actually drinking it!

The Caol Ila whisky distillery is slightly south of Bunnahabhain on the Sound of Islay coastline. The name Cao Ila is actually the Gaelic for Sound of Islay. The whisky it produces is much peatier than that of its near neighbour and Caol Ila is the largest whisky producer on the island. Tours are available but schedules vary depending upon the time of year. Further information can be obtained and bookings made by calling (01496) 302769 or (+44) 1496 302769.

The short video below was filmed from the small pier at Caol Ila and shows the distillery buildings as well as the stunning views available over the Sound of Islay on what was a magnificent sunny day.

Ardbeg is one of the three whisky distilleries on Islay's South Coast, all renowned for the peaty quality of their productions. The visitor car park is reached by turning right shortly after you enter the distillery grounds with the visitor centre, shop and restaurant immediately adjacent.

Lunch was ordered from the restaurant's extensive menu on the occasion of this visit and all meals received by our small group were thoroughly enjoyed. One of the pictures above shows the Maltmans' Platter (a variation of a Ploughmans' Lunch). The centrepiece of the platter was undoubtedly the two huge wedges of delicious Mull Farmhouse Cheddar cheese. The cheese was accompanied by fresh bread, oatcakes, a selection of pickles, celery and grapes.

Bowmore Distillery is the oldest on Islay and dates back to 1779. It is located close to the pier and harbour in Bowmore, just off the Main Street. It has a combined visitor centre and shop from which tours of the distillery can be booked. You can also arrange a tour by calling (01496) 810671 or (+44) 1496 810671 from overseas.

A tour of Bowmore Distillery will normally include a visit to the malt barn. This is where the barley is spread out on the floor and regularly turned by hand to ensure it matures evenly. Peat ovens (kilns) below and the smoke they produce introduce the smoky, peat flavour to the grain. Unfortunately, on the occasion of this visit, the malt barn was in a routine shutdown period.

When the grain has been dried in the kilns and has taken on its peat smokiness, it is transferred to the mill where it is separated from the chaff and ground in to what becomes known as grist.

Large tanks in the mash house heat up water taken from the River Laggan which is then mixed with the grist and sugar in the mash tun. The liquid only will then be pumped to the Tun Room for fermentation to begin.

This is where yeast is added to the water and sugar, with the solution left for forty-eight hours to ferment. The smell is reminiscent of brewing beer - simply bcause at this stage, that is precisely what it is. The solution following this procedure becomes known as wash.

There are four stills in Bowmore Distillery still house, where the wash will be twice distilled in the final stage of the procedure. The quality of the distilled solution is carefully measured and checked before the best quality spirit is barrelled.

The vaults is where the barrelled whisky will be stored during the long maturing process. It is interesting to note that the two types of barrels used for the whisky have travelled a long way to reach Scotland. Spanish sherry barrels and American oak bourbon barrels are used for aging the whisky. Sometimes only one or the other will be used but - depending upon the particular malt whisky being produced - it may be that the whisky is at some point transferred from one to the other.

At the end of your Bowmore Distillery tour, you will be taken back to the Visitor Centre and to the tasting room. This is where you will be given the opportunity to taste Bowmore whisky from a wide available selection and sample the end result of the lengthy procedure you have recently witnessed.

The River Laggan is the river from which all the water to make Bowmore single malts is taken. While this will be mentioned on your tour, you will not see the actual river. The photo above shows the river at a particularly scenic part of its course, while you should be able to see the peatiness of the water in the photo below.