Enjoying a great schnitzel dinner brings back some of my fondest memories of living in Germany: the gorgeous scenery, the fresh and satisfying food, the quality local wines, and the smooth, delectable gelato bought from the storefront of a seventeenth-century building and eaten while wondering winding streets at the foot of a forested mountain. Sigh. I miss it.

But, I still try to enjoy the foods we loved from time to time, and although I usually ordered a regular Wiener schnitzel, my husband loves his Jaeger schnitzel! So I made it a point to find a way to make a dish that tasted great but didn't keep me in the kitchen all day. The following recipe is pretty close to what we got in Germany and it tastes great. And it's not the quickest recipe I make, but it doesn't take too long and it's super easy! Guten Appetit!

Getting ready for a great meal...

This is the gravy I used:

First, lay out the pork chops between two pieces of plastic wrap and pound with a meat tenderizer to make them a little bit bigger. You may want to cut any large chunks of fat off the meat. Sprinkle each side of the pork with salt, pepper and garlic powder.

Then arrange three shallow bowls, putting the flour in one, the eggs in the second and the breadcrumbs in the third. Mix the eggs and a tablespoon of water with a fork until scrambled. Coat each piece of pork in the flour, then the eggs, and finally the breadcrumbs.

Make sure the entire piece of meat is covered in each ingredient before moving on to the next, and pat the breadcrumbs into each piece. Put the breaded pieces on a plate, cover it with plastic wrap or a paper towel and put the plate in the refrigerator until you're ready to cook the pork. 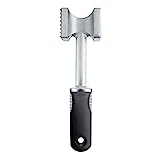 Clean the mushrooms by gently wiping them down with a damp towel and then slice them. In a large frying pan, melt the butter. Add the mushrooms, mixing to coat them in the butter, and cook them on medium for at least twenty minutes, stirring occasionally.

They'll wilt down to nearly half their precooked size. It's best to finish the mushrooms before you cook the pork, because the mushrooms can sit, but the pork shouldn't - you want to eat it when it's hot.

Meanwhile, fill a different, high-sided frying pan with about a half-inch of olive oil. Heat the oil until you can drop in a few breadcrumbs and they sizzle. Cook the breaded pork for about four minutes on each side, or until they're browned. You can cover the pan if you want, but it's not necessary.

The pork pieces should sizzle while cooking; if there's no sizzle, the oil isn't hot enough and the pork will just sit in the oil and get oversaturated and gooey, but if there's popping the oil is too hot.

Cook two or three pieces of pork at a time and when they are done, put them on a plate that's covered with a few paper towels, to soak up any excess oil.

While the pork is cooking, heat 1 ½ cups of water in a large measuring cup in the microwave for a few minutes until it's nearly boiling. Then whisk the gravy mixes into the water. Drain any excess butter from the pan with the mushrooms, and then mix the brown gravy into the mushrooms.

Let the gravy mixture come to a boil and then simmer on medium for three or four minutes, until thickened, stirring occasionally. Then let the gravy sit on low until you're ready for dinner, pouring it very carefully back into the measuring cup or a large gravy boat to serve.

When you're ready to eat, put a piece of breaded pork (schnitzel) on you plate and top with the brown gravy.

The whole process from start to finish takes about 30 to 45 minutes, depending on how fast you move, and it feeds three to six people, depending on how much they eat. Serve it with a salad and some noodles or potatoes; I usually use one of my favorite potato recipes. And don't forget some cold, German beer!

Do you need the metric measurements?
Try this website for conversions. It's a quick way to find out how the measurements compare.

Traditionally, the schnitzel served in German restaurants is quite larger than what I suggest here, so feel free to use bigger pieces of pork.

Also, you can substitute chicken for the pork, if you like, though I usually cut the chicken breasts in half before breading them.

Tell Us How You Prefer Your Schnitzel!

Leave a note! - What do you think of the recipe? Have you tried it? Let us know! (You don't have to be signed into Squidoo, anyone can leave a note!)