Lefse (lef-suh) is a Norwegian flat bread that is cooked on a griddle, and is often made out of leftover mashed potatoes. The ingredients needed to make this bread are few, consisting primarily of potatoes, flour and butter. The finished product looks similar to a very thin Mexican tortilla, and it has a buttered potato flavor.

Though humble in nature, lefse is a beloved Scandinavian treat that takes center stage on the holiday table. Many Scandinavian-Americans prepare lefse for their Thanksgiving and Christmas feasts. Families gather together to cook lefse together as a holiday activity that keeps the tradition alive. My own family has been making lefse for more than one hundred years, since my great-grandparents immigrated to South Dakota from Norway around the turn of the 20th century (and probably for generations before that in Norway.) When I was a child, my grandmother and mother made the lefse. In recent years, my sister and I have taken on the privilege and responsibility of preparing lefse for the holidays, and are teaching our children the skill so that they can carry on the tradition.

Lefse is delicious served hot with butter. Some of our family members like to sprinkle it and cinnamon-sugar or lingonberry jam. Others roll their Swedish meatballs in a lefse, or dip the bread into cream gravy. This recipe makes 15-20 lefses, and is easily doubled for a crowd or to freeze for later.

This recipe is adapted from Aunt Charlotte's Recipe, posted at LefseTime.com.

Place butter into the warm, empty pot in which you cooked the potatoes. While they are still hot, rice all of your potatoes and then measure four cups back into the pot with the butter. To prevent potatoes from squeezing out of the top of the ricer and getting all over the place, fill the ricer 1/2 full or less and squeeze slowly. Be careful with the hot potatoes so that you don't burn your hands.

Stir the potatoes and the butter until they are mixed well. Cover and refrigerate for several hours (until completely cool) or overnight. If you are in a hurry, you can cool them faster by placing them in the freezer, stirring them every hour and returning them to the freezer until they are cool.

If you have leftover potatoes, set them aside to use for another recipe. Read to the bottom of this article for a perfect mashed potato instructional and a link to a delicious potato pancake recipe. 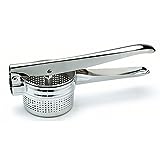 This is the ricer that I have used for many years. Having a ricer is a must not only for lefse, but also for making the fluffiest mashed potatoes all year long.

Using a 1/4 or 1/3 cup measuring cup, scoop out 15-20 lumps onto a tray or cookie sheet. Shape each lump, using your hands to roll each one into a ball and gently flatten into a round patty with smooth edges and no cracks. Any cracks in your patties will expand into bigger crevices when you roll out the dough. Cover the tray loosely with plastic wrap and place it in the refrigerator.

Rub flour all over your lefse griddle, and then wipe it off with a dry cloth. Turn on your griddle and heat to 500 degrees Fahrenheit.

Traditionally, lefse makers have used grooved rolling pins, or pins with square designs on them. While these are very nice and can help to make a very flat, thin piece of lefse, a regular rolling pin works just fine.

To begin rolling, lightly dip both sides of a patty in flour and place it in the center of your prepped pastry board. Gently roll forward and back using slight downward pressure, spreading out the dough slowly. Change your angle often so that the dough spreads out in a circle with even thickness. If a large crack begins to appear at the edge of your sheet, you can fold it over on itself or add a small piece of dough to "heal" the crack. This is optional and is only for looks; lefse with a rough edge tastes just as good as a perfect one does.

Rub in a bit more flour onto your rolling pin and pastry board between each sheet, paying special attention to areas that absorb moisture. Don't worry if your lefses don't come out perfectly round.

Tip: Lefse-making is much quicker when done with a partner. One person can roll out the dough while the other cooks them on the griddle. In this way, the job is easier and more fun!

I have always used a regular rolling pin for making lefse, but I have been looking around for the best deal on a square-cut roller that has ridges to pierce the dough. Piercing creates small escape hatches for air escape and prevent lefse from puffing up like a balloon during cooking. It also assists in rolling very thin lefse circles; the thinner, the better!

This would make a great gift for my mom and sister, who are lefse-makers, too.

Transfer to the Griddle

Using a lefse turning stick or long, thin spatula, quickly slide the stick under the middle of the lefse, sliding all the way through in one smooth motion, keeping the tip of the stick facing down. Lift lefse from the board and transfer it to the griddle. Lay the lefse down on one side of the griddle and twist (spin) the stick to unroll the folded edge until it is laying flat. Again you will need to move quickly, and in one smooth motion. If your lefse is not centered, let it cook for a few seconds, and then gently slide it to the center using a hot pad.

Cook the lefse until it is bubbly and there are brown spots when you lift to view the underside. Some recipes suggest cooking until the spots are light brown, but I prefer a dark brown spot to ensure that the lefse is cooked through and won't become mushy in storage.

Just as you did to lift the lefse off of the pastry board, quickly slide your lefse stick under the middle of the sheet, lift and turn over, spinning the stick to unroll. Cook the second side until you see the same brown spots when you lift the edge. The second side generally cooks much faster than the first side.

Transfer cooked lefse to a thick towel or lefse cozy. Do not use towels that are heavily scented with perfumed detergents or dryer sheets. Wipe excess flour off of the griddle before cooking the next lefse.

When you have cooked and stacked a dozen lefse sheets, cover them with a cozy or towel, and set them aside to cool. If you have more lefse sheets to make, start a new stack on another towel. Keep your stacks small so that they cool quickly to prevent sheets from becoming too wet from the steam. A little steam will make your lefse sheets soft and pliable; too much steam will cause them to become mushy.

Note: It can take several hours for lefse stacks to cool. To speed up the process, turn the stacks over after one hour, or "shuffle" the stacks, splitting the stacks in half and flipping them so that sheets that were in the middle are turned to the outside. Refrain from packaging lefse before it is completely cool or the sheets may become mushy in the zipper bag.

Did you have leftover potatoes after making your lefse? Scroll down to view a perfect mashed potato recipe and a link to make delicious potato pancakes.

Depending on where you live, lefse-making supplies can be difficult to find. I live in Arizona, and when my ricer broke the day before I was scheduled to teach a lefse class, I had a difficult time tracking one down locally. Fortunately, Amazon carries all of the supplies you will need at great prices, and it offers FREE SuperSaver shipping on qualified orders of $25 or more.

I recommend having all of the right equipment, as it makes the job much easier and more fun. If, however, you need to substitute tools that you may already have around the house, here are some suggestions:

Ricer: Use a food mill with the largest sieve, or simply mash the potatoes with a potato masher.

Lefse stick: Substitute an icing spreader or thin, angled spatula (it just needs to be longer than the width of your lefse sheets.)

Lefse Grill or Griddle: Use a pancake griddle.

Lefse cozy: Substitute thick, clean bath towels that have not been washed with perfumed detergents or dryer sheets.

If you find that you really enjoy making lefse, invest in a few official lefse tools. These make great gifts for Scandinavian friends, too!

If you end up with leftover baked or boiled potatoes, you are in luck! Those leftovers can become delicious mashed potatoes or potato pancakes. I have included a link to a great recipe for potato pancakes in the "Links I Love" section below.

Remove the potato peels and press the potatoes through a ricer. To make perfect mashed potatoes, do what my grandmother did and rice them a second time. If your ricer has multiple sized sieves, use a smaller size than you did the first time. Add a pat of softened butter and salt to taste, finishing by whipping with a beater until light and fluffy. The potatoes should be dry enough to keep the finished product from becoming sticky. Reheat in the microwave, and enjoy!

here are some places on the web that I visit often. If you have a great lefse-related webpage or blog that you would like for us to include in this list, send us a message containing the URL and a short description. Kindly add a link to your webpage back to this lens.

Passing on the Tradition

When my kids were little, I worked hours on end to make all of the holiday foods that we enjoy. But as they grew, I began to include them in the tasks. At first, the best part of having them "help" to make the lefse was watching the creative (and sometimes mildly dangerous) things that they did with the lefse stick. Though not particularly helpful, it was entertaining and I enjoyed their company.

My girls are all in their teens and twenties now, and they are learning how to make lefse, and other holiday treats, in earnest. Each year gets a little bit easier as they do more and I take on more of a supervisory (and wine-drinking) role in the kitchen. It is my hope that as they leave my home, they will have fond memories of cooking together, and that carrying on the traditions with their own families will be as important to them as it has been to me.

I would love to hear from you. And if you have a related recipe or link to share, feel free to post it here. Kindly add a link back to this lens from you webpage.