The great ideas are always simple. This is the case of the paper coffee filter. This idea came to one human mind centuries after the world got hooked on coffee and thousands of years since the invention of paper.
We do not have to many details of how it happened but we know now that it was a success story. At the end, we got to love the result and some of use it almost daily.

One early morning, on a sunny german spring, Frau Melitta Bentz woke up to make another coffee for her husband, Herr Hugo Bentz. She started the fire on the kitchen and set up her percolator and pretty soon she brew a wonderful coffee. Soon after, teased by the smell, Herr Bentz step in. They sat down around the table drinking coffee and planning the day ahead.

A short history of the paper coffee filter

The inventor of the paper coffee filter is Melitta Bentz. She was born in Dresden, in January 3 1873 as Amelie Auguste Melitta Liebscher, and died on June 29, 1950. She was the daughter of a publisher. She married Hugo Bentz and they had 2 sons, Horst and Willie, and a daughter, Hertha.

In 1908, Melitta Bentz, in an attempt to block unwanted coffee residues, discovered that using blotting paper to filter the coffee, did not alter the test and came with a better result.
She also invented the paper coffee filter holder, by perforating a brass pot and lining it with blotting paper.

The invention was patented in the summer of 1908 under the name of “Filter top device lined with filter paper”.

When all coffee was gone and her husband left for office, at a department store, and the two children went to school, Frau Melitta got her house all cleaned and went in town to find some fresh legumes for dinner. At this time of year, the weather in Dresden was still chilly and it rained sometimes for few days in a row.

That day, in the year of 1908, it was raining. As Melitta wondered from farmer to farmer, she came be sorry she didn’t brushed her teeth one more time that morning. That annoying coffee grounds were still stuck between her lower incisors.

Now, that was a very old problem that Frau Melitta had to face almost everyday.

She was a proud housewife that would do everything for the happiness of her family. And most of all she was dedicated to her husband. Herr Hugo was so bothered by the coffee grounds in his cups that he would often drink only the first half of a cup, demanding another clean one with more coffee. By the end of the morning Melitta would have to wash the whole cupboard.
Not that she mind the work but there were other things to be done as well. Oh..If she could strain that coffee so the grounds won’t snick into her husband’s cup again.

Soon, a company was born. Under the name of “M. Bentz”, with only the membrers of the family as employees, the company registered a big success at the Leipzig Trade Fair.
Bentz family worked very hard for their new business. Hugo Bentz give up his job and the two sons worked for it after school. The new product was demonstrated in window shopping or among other housewives or female friends of Melitta. The paper coffee filter won two medals in Leipzig.

The company continued to grew and diversify during the years, improving the coffee filters. In 1925, the company, then managed by Hugo Bentz, Melitta’s husband, created the green and red packaging as we know it today and so the Melitta brand was born.

Today, the company, Melitta Group KG is based on Minden and has almost 4000 employees. Over years it had remained in the family and is now managed by Melitta’s grandchildren.

She had been experiencing with pieces of towels and other fabrics that she put over the cup before pouring the hot coffee and it almost worked. But for some reason the taste was not the same, it was bitter and flavorless. And she wasn’t going to spoil that good, expensive coffee.

“It must be something that works” she told herself, remembering her dad’s words that “there was always someone smarter then you that can do things better”. That he was himself o very smart man that grew a publishing company from scratch had inspired Melitta every day.
And Thinking of her father Melitta suddenly realized that she never tried to filter the coffee through paper. What about that thick but porous paper they used to suck the excess of ink, the blotting paper?

Whit this idea on her mind, Frau Melitta rushed home, almost forgetting to buy food for dinner. Once inside, she fire up the stove and set the percolator one more time. Then burst into the children’s room, grabbing the blotting paper they used for homework, discharging the dirty parts. While the percolator was brewing the coffee, Melitta tide two layers of paper over the top of a tall cup. When the coffee was ready, she carefully pour hot coffee over the paper in the cup. At first, there was a mess all over, as the liquid could not get through the paper as fast as she poured. Then she loosen the wrap, and giving the paper a push, she made a conic groove . Than she continued pouring the coffee, this time without a spill. At the end, when she was done, all the coffee was in the cup and all the grounds were on the paper. Then she remembered she had an small old brass pot she barely used. With a hammer and a nail she made three hols in the bottom  then lined it with paper and placed it over the cup. There was the very first paper coffee filter.
Melitta was happy. She couldn't wait to show her husband and tell her dad. The next morning should be a better day!

And the rest is history. Within a year, she was a successful businesswomen.

Disclosure: This is a piece of fiction based on real characters and events. The History of Paper Coffee Filter on the right side of this page. 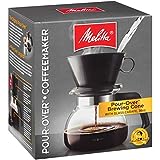