Meze is an abbreviation for Mezedes and in Cyprus it is oftentimes, different to typical appetizers, a meal in its own. You have just to decide between vegetable, meat or fish meze.

Meze, what means 'little delicacies', can consist out of up to 30 different small plates with dips, vegetables and a wide range of fish or meat. It is served in groups of 4 or 5 plates at a time and usually 5 to 10 different groups arrive at the table.

Although in different tavernas, different dishes are served, there is a kind of pattern in it. Olives, taramosalata, hummus and yoghurt are followed by vegetables like eggplants or zucchini. Afterwards small meat or fish dishes are served before whole fish or grills arrive at the table.

As the pattern remains the same, the dishes served depend on the speciality of the taverna as well as the season.

Meze is not just food, mezes are also fun and entertainment.

A lot of food is served and it is not expected that everything is eaten. Cyprus meze is more a social event where people eat in groups, serve each other and enjoy the entertainment.

Halloumi is a traditional cheese from Cyprus, the island in the Mediterranean Sea.

Halloumi has a higher melting point than other cheese what makes it suitable for frying and grilling. You almost won't find any BBQ in Cyprus without the use of halloumi.

Taramosalata is actually a spread well known in Greece, Turkey and Cyprus that is prepared from fish roe, freshly squeezed lemon juice, vinegar, olive oil, and either soaked bread or potatoes. This spread is often provided together in a Cyprus meze, or with appetizers, that often can involve a variety of smaller, light dishes that are consumed in advance of supper or with a number of glasses of wine or ouzo.

Tzatziki is a yoghurt dip which is included in every Cyprus Meze. But it also accompanies souvlaki as a kind of sauce.

In Cyprus tzatziki is known as ttalattouri and it includes less garlic but mint. Tzatziki is always served cold.

The eggplant, also know as aubergine or brinjal is a plant from the family of the nightshades and thus closely related to tomatoes, potatoes and peppers. The fruit, which is used as a vegetable in cooking is known with the same name. The plant comes originally from India and Sri Lanka, but is meanwhile cultivated in almost the whole world.

Sheftalia is a typical food from Cyprus. Sheftalia is a kind of sausage without skin. Instead of sausage casing it uses caul fat, the membrane that covers the stomach of a lamb or pig, to wrap the ingredients. In a Cyprus meze you will find Sheftalia often among a wide variety of dishes.

Whatever food you like, whether you prefer fish, meat or even a vegetarian life style, a Greek Village Salad is a healthy and always tasty side dish to accompany any meal you decide for.

It is fast to prepare and due to its basic ingredients, you can be sure to have always all necessary things in the fridge. Just find some tomatoes, cucumbers, onion, green bell pepper, olives and some feta cheese and you are ready to go.

As the dishes included in a Cyprus meze are different, there are some typical dishes you will find in almost any meze in almost any taverna:

From Tapas to Meze: Small Plates from the Mediterranean
Buy Now 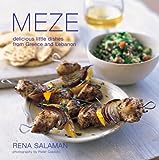 Meze: Small Plates to Savor and Share from the Mediterranean Table
Buy Now

Since a few years, Cyprus with its now five golf courses, became more and more popular for golf holidays as well. This is also, because Cyprus is a holiday destination, that has much more to offer. If you are looking for perfect beaches or archeological places, Cyprus offers something for everyone.