How to Catch, Buy and Cook Quahog Clams

This page has information on hard clams, also known as quahogs, round clams, or hard-shell clams.

Quahogs are most abundant from New England southward to Virginia.

Depending on size, quahogs are eaten raw on the half shell, steamed, or chopped and used in chowders, fritters and dishes.

How to Dig Quahogs

Digging wild quahog clams along the Atlantic coast is a time honored way to harvest shellfish while enjoying a day on the water. The activity takes very little skill and can be enjoyed by people of all ages. A few simple items are all that are needed to enjoy this method of finding quahog clams.

Equipment is simple and inexpensive. The bare essentials are a bucket or mesh bag and a gardener's hand rake. Serious clammers may choose to purchase a more extensive set of clamming tools, but the simple hand rake will do for beginners.

Other options include a New England style hand rake which is longer, or a full sized 4 tined rake. Potato rakes also work well and allow clammers to dig without bending over. These rakes should not be confused with the large clam rakes which are used to randomly rake areas of submerged bottom.

Most productive clam flats are found in areas of flat or gently sloping sand or mud. Clammers scan the flats while walking, looking for the telltale "keyhole" that indicates a buried clam. To breathe, they expel water which makes a small hole in the sand or mud. On sandy bottoms, the hole may not form the distinctive keyhole shape that is seen in muddy areas.

Quahogs have a foot that allows the clam to bury itself in soft sand. The tube-like neck pumps sea water, up to three gallons an hour, in and out of the clam. During high tides, clams move vertically in the substrate to feed. As the tides recede, they bury deeper, eventually settling down about an inch beneath the sand.

Once a clam breathing hole is found, a few scrapes with a tool is usually all that is needed. The metal tine makes a distinctive ring when it contacts a clam. Harvesters then dig and lift the prize from the bottom, rinse it off and store it before moving on to the next clam. 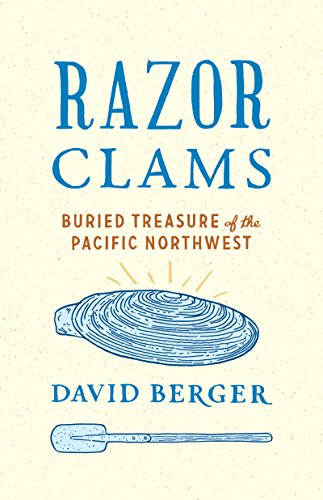 How Deep Are Quahogs Buried?

This picture shows a partially uncovered quahog clam, which was lying about an inch below the sand.

How To Shuck Quahog Clams

Large "chowder" sized quahog clams must be shucked (opened) before using. Although professional clammers can easily open and shuck a clam in short order, the task is a bit intimidating for novice clam enthusiasts.

One trick that will make the job much simpler is to place the clams on a tray or large bowl and place them in the freezer for a short period of time. Freezer temperatures vary, but a good rule of thumb is that 12-24 clams will require about 30-45 minutes of freezer time to chill.

The idea is to cool the clams but not let them freeze hard. It is a good idea to inspect the clams after about 30 minutes, rechecking every so often until one of the clams opens its shell just a tiny bit. As soon as the first clam begins to open, remove the batch.

To shuck quahogs, a clean, sturdy work surface is required. Equipment includes a special clam knife, a medium bowl and a bucket for the shells. To begin, lay the clams out on the work area. Select a clam and position it on the work area, edge up. Working at the lower edge, align the knife with the edge of the two shells. If you are lucky, there will be a very slight gap between the shells. Using palm pressure on the backside of the knife, push downward until the knife slips between the shells.

After shucking the batch of clams, move to the kitchen to finish the process. Scissors and 2 extra bowls will be required. The work area and hands should be spotlessly clean for the final part. Work quickly or process clams in small batches to ensure that they stay cool at all times.

Remove clams, one at a time from the juice, swirling each one to remove any grit. Using scissors, hold each clam and snip off all parts EXCEPT the stomach. Capture clam parts in one bowl and discard stomachs in the other bowl.

When the clams have been processed, pour off the majority of the juice in with the clam pieces. The remaining contents will be darker in color and may include grit or bits of shell mixed with small pieces of clam. Fragments of clam meat and adductor muscles can be rinsed in water and saved. The remaining contents should be discarded.

At this point, a high quality mixture of clam parts and juice remains. For chowder, the entire contents will be used. For other dishes such as clam fritters, the majority of the juice will be separated and saved. In either case, keep everything chilled, covered and use or freeze within a day or so. Diced clams may be frozen in their own juice, preferably in a vacuum freezer bag.

These are basic explanations of quahog clam sizes:

Topneck: 5-7 per pound, approximately 1.5" in diameter

Cherrystone: 3-4 per pound, approximately 2" in diameter

Chowder: greater than 2" in diameter

Littleneck, middleneck and topneck quahogs are prized for steaming and other dishes.

Cherrystone quahogs are sometimes eaten raw on the half shell, or served in dishes such as clams casino.

What is your Favorite Way to Eat Clams?

What is the Oldest Living Animal?

The ocean quahog, a relative of the common quahog, is a large, slow growing clam that lives far out at sea. The ocean quahog can live to a very old age. The oldest ocean quahog was estimated to be about 400 years old, making it the longest lived animal on earth.