Raspberries - A Taste of Summer

I love them fresh with cream, in pies and tarts, in smoothies and milkshakes, and in many other ways.

I have grown raspberries in the garden and fought with the birds to eat them when they ripen. I have made them into jam, put them in cakes and desserts and even preserved them in liqueurs for Christmas.

The original raspberries had the Latin name of Rubus idaeus - Rubus is the genus and the idaeus referred to the European species of the sub-genus Idaeobatus. Now raspberries include berries closely related to the original species and include Rubus strigosus - the American raspberry.

Raspberries make a great addition to your diet. They are rich in vitamin C, containing approximately 26mg in every 100g of fruit. Raspberries make an excellent contribution towards your daily fibre requirement as up to 20% of their weight can be fibre. They are also among the best sources of polyphenol antioxidants as well as other vitamins, minerals and trace elements.

Nothing could be quicker or easier to make than this raspberry smoothie. The other good news is that this contributes one portion towards your daily requirement of fruit and vegetables. It serves four.

Put all the ingredients into a blender and mix for 30 seconds, then blend until smooth. 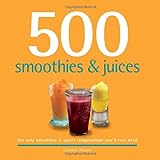 500 Smoothies & Juices: The Only Smoothie & Juice Compendium You'll Ever Need (500 Series Cookbooks)
This is a beautifully illustrated cookbook for a wonderful range of smoothies and juices.
Buy Now

Mousse is a beautiful, light, summer dessert but it's not something you should leave until the last minute to make. This raspberry mousse is only lightly set. Serves 6.

1. Set aside 8 raspberries for decoration.

2. Put the rest of the raspberries in a pan, stir and heat to a simmer. Remove from the heat when the fruit is soft, then rub it through a sieve which should give you about 1/2 pint of purée.

3. Put the eggs and extra yolks into a heatproof bowl, then place the bowl over a pan of hot water. Whisk the eggs until thick and fluffy. At this point, remove the bowl from the hot water and place the whole bowl inside another containing cold water or ice cubes. Continue to whisk the egg mixture until it is cool.

4. Dissolve the gelatine in the 3 tbs of water, stir it into the raspberry purée then whisk the mixture into the eggs.

5. Lightly whip the cream and stir quickly into the main mixture before it sets. Now transfer the mousse into a serving bowl. Leave to set in the refrigerator until it is set - about an hour to 90 minutes.

6. Decorate with the raspberries you set aside at the beginning and grated chocolate.

The Blue Chair Jam Cookbook (Volume 1)
With over 100 recipes for jams and marmalades, new and traditional, this is the book for anybody who loves preserving fruit.
Buy Now

Making jams or preserves is an exact science - get the proportions of fruit, water and sugar wrong and you could have a fruit sauce instead of a nice preserve to spread on bread. Alternatively, it could set so hard, you'll need a hammer and chisel to break some out of the jar.

Because of this and the difference in UK and US pounds, let alone converting everything from UK weights to cups and spoons, I have decided not to give a jam or preserve recipe.

I love making jams and jellies, it gives me a real sense of accomplishment but all my recipes are in UK measures.

Instead, the video above gives you a good idea of the methods used.

If you preserve raspberries in alcoholic spirits, people will line up to receive a jar or three for a Christmas or Thanksgiving gift. On the other hand, once you've tasted it, you won't want to give it to anybody. Trust me, I know this for a fact!

Take 16oz of raspberries, washed and hulled, 12oz sugar and 3/4 of litre of a spirit of your choice, eg gin, bacardi (white rum) or vodka are good because they don't spoil the colour of the raspberries.

Put everything in a sterilised preserving jar(s) and seal. Shake well.

Store the jar or jars somewhere dark, shake the jar every day for a month than just occasionally afterwards. Try to keep them for a minimum of three months before using.

When you are ready, drain off the liquid through muslin or other finely woven, clean fabric. You don't want seeds or specks of fruit in it. Bottle the liqueur.

Please don't throw the fruit away, it is so delicious but don't eat it in one go all by yourself otherwise you'll definitely have a hangover! 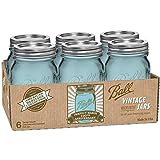 Ball Jar Heritage Collection Pint Jars with Lids and Bands, Blue, Set of 6
If you make jam or preserve fruit in alcohol, you'll need good preserving jars and these are Amazon's number one bestseller.
Buy Now

Cranachan is a traditional Scottish summer dessert, usually served with each ingredient in a separate dish so people could help themselves to each one in the proportion they preferred. Now it is often served ready made up in glasses. Serves 4.

1. In a dry pan, toast the oatmeal over a medium heat until they are golden brown, then leave to cool in a cold bowl.

2. Whisk together the cream, whisky and honey until it forms soft peaks, fold in the oatmeal.

3. Starting with the raspberries, put in layers of raspberries and the honey flavoured cream and oatmeal mixture into four individual glasses. Finish off by decorating the top of each glass of cranachan with a few raspberries.

See how easy cranachan is to make

Give Your Opinion of Raspberries

Do you love raspberries or hate them or perhaps you just quite like them?

How to Grow Raspberries

Choosing and Planting a Raspberry Bush

When I had a garden, I loved picking raspberries I had grown myself. I knew I hadn't used any chemical fertilisers or pesticides and that they were absolutely fresh. I'd recommend growing raspberries to anybody who has the right conditions and enough outside space.