For a trip back to the 1960s try this recipe for hotdogs with Hawaiian punch. To me, it just evokes the era...

Hawaiian Punch is a fruit punch drink with 5 percent real fruit juice that is now owned by the Dr Pepper Snapple Group, Inc. Originally invented by A.W. Leo, Tom Yates and Ralph Harrison as an ice cream sauce in 1934, it was later made into a tasty drink when it was mixed with water. To read more about Hawaiian Punch and the mascot, Punchy, visit Hawaiian Punch's Punchy.

The recipe featured on this page was found online and is reportedly from a special Collector's Cook Book distributed with the July, 1968 issue of Woman's Day magazine.

Do you drink Hawaiian punch?

When you are ready to serve your dinner, cut each hot dog in half in a few places along the curved side. (This part is tricky, I blew it as the picture shows but apparently my teenage Boy Scouts know the trick so next time I will add a picture showing you the right way to cut the dogs.)

Grill the hotdogs and some pineapple slices together on a cookie tray brushing often with the baste. Wanting the hotdogs to hurry up and cook, I eventually removed them from the tray to get them to brown a bit more and to try to get them to curl. It was not until later that I discovered I had cut them incorrectly.

Serve the hot dog and pineapple slices on toasted hamburger buns. One of my sons ate his with the usual hot dog accompaniements of mustard and ketchup (hold the pineapple.) Another son, ate his burger plain with just pineapple and weiner. My husband and sister-in-law chose to douse their burgers with my Memphis baked beans. (That recipe, however, will have to follow another day. In the meantime, feel free to improvise with any baked bean you enjoy.)

I served my hot dogs with the baked beans and with coleslaw. Quite tasty considering I was serving hot dogs, one of the foods we try not to eat too often! However, they were a nostalgic treat and however you choose to eat your Hawaiian Punch hot dog, I hope you enjoy it!

Our Verdict? The Hawaiian Punch Hot Dog Recipe Is Worth Doing Again

(Until we get the recipe perfected!)

We enjoyed this recipe, although we ate it many different ways. From the photo, it is obvious that I have to work on the hotdog slitting in order to get the hotdogs to curl in a circle. As I stated earlier, my sons know how and next time, hopefully, that part will be done properly. However, the shape really had no impact on the taste. All of the hotdogs disappeared as did much of the grilled pineapple. They were tasty and the tropical baste was good and, I would say, worth doing again. We'll have to see what else we can dream of to use the baste for...

The Gallery of Regrettable Food

Check out the titles on some of this food...adult/high school ketchup pistachio cake. Meat pie with meat crust. Baked peppers with creamy marshmallow sauce. They fit in perfectly with this hot dog recipe with Hawaiian punch, don't they? If you are looking for some unusual retro or vintage-style recipes, this might just be the book for you...featuring lots of pictures, recipes, tidbits of information and tips from mainstream cookbooks from between 1940 and 1970, when "the only spice permitted in excess [was] fat. 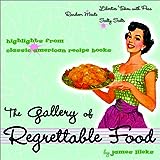 The Gallery of Regrettable Food: Highlights from Classic American Recipe Books
Amazon Customer Review: "This is not a cookbook. If you cook from this book you should be shot, for indeed, that would be more merciful than eating the meal. But the truth is, thousands of moms in the 1950s and 1960s *did* cook from the cookbooks that James Lileks so hilariously skewers in "The Gallery of Regrettable Food," and if you ever remember your mom proudly plopping down a new recipe that had dad and the kids staring at each other in disbelief, then this book is for you.Buy it for your mom for Christmas...and be prepared to have her take down her hilarious collection of bad 1960s cookbooks to show around. Just, for God's sake, don't ever, *ever* let her cook from them." - John DiBello, Brooklyn, NY
Buy Now

Will you be trying this vintage hot dog recipe at your home?

Hawaiian Punch Is Available Through Amazon In The Powder Packet