What is a Crumble Pudding or Dessert?

Crumble of many different types is a popular summer dessert in the UK. It consists usually of fruit (apple probably being the most popular) topped by a sweet crumbly mixture of butter, sugar and flour. Rhubarb crumble is a particular favourite of many and ginger will often be included to spice up the rhubarb and give it an additional edge before the finished dish is served with ice cream, whipped cream or fresh cream. In this instance, rather than being incorporated in the crumble in dried and ground form, the ginger is fresh and has been used as the main flavouring in the homemade ice cream, which is topped with a chocolate frosting applied shortly before service. How to Make Ginger Ice Cream 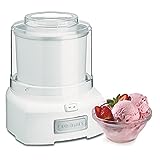 Modern ice cream makers come in many different types and price ranges. If you are looking to pick up a bargain appliance, you may wish to consider this cut price option. With a one and a half quart capacity and no need for ice, you could be enjoying your homemade ice cream or iced drink in around twenty minutes!

Ice cream prepared this way for many people will be deemed to be old-fashioned and unnecessarily complicated in the modern era of electric ice cream makers. Perhaps in some ways it is but in other ways it is often good to go back to more traditional cooking and food preparation methods, which can be employed by people who may not have the latest technical gadgetry available. If you do choose to prepare the ice cream using an ice cream maker, you can of course do so simply by adapting the following steps to suit the manufacturer's instructions regarding your particular machine. How Nutritious is Rhubarb?

How to Make Rhubarb Crumble How to Serve Rhubarb Crumble and Ginger Ice Cream

Spoon some crumble on to each serving plate. Top with a portion of the ice cream and serve immediately.

Thanks for Reading - Please Give your Rating of this Recipe Idea