Roast chicken is a huge favourite of millions of people around the world. From the point where its delicious, roasting in the oven smell permeates the kitchen and even the remainder of the home, to the point where it is served succulent and juicy on a plate, roast chicken should represent one of the ultimate comfort foods. This page is devoted to looking at different ways in which it is possible to roast a chicken to nigh on perfection, as well as some tasty serving suggestions.

The Right Tools for the Job - A Good Roasting Tray 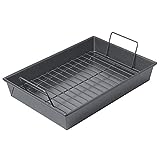 Chicago Metallic Professional Roast Pan with Non-Stick Rack, 13-Inch-by-9, Gray
Whichever method of roasting a chicken in the oven you choose to employ, a good roasting tray is essential. If cared for properly, this quality tray will last for many years and chicken roastings, providing excellent, long term value for money.
Buy Now

How to Prepare a Chicken for Roasting

When you buy a prepared, fresh chicken, it will very often be trussed with string, or even elasticated string. It is imperative that you remove this before cooking. When you roast a chicken which has been trussed in any way, you are increasing the risk of the chicken coming out of the oven under-cooked and further cooking time being required. This is because the thigh is forced unnecessarily tightly against the main body of the bird, preventing even cooking. Instead, pull the thigh slightly away from the body of the bird, gently so as not to break the skin.

A chicken should be washed before being roasted under running cold water and patted carefully dry with kitchen paper. At this stage, you should check also that the giblets are not contained in a sealed package in the cavity of the chicken. If so, they must be removed and either discarded or used for an alternative purpose such as making stock.

This is a particularly unorthodox way of roasting a chicken, as the backbone is removed from the bird before it is cooked. The chicken is then opened out and laid on a bed of root vegetables and rosemary.

The photographs immediately below relate to the various stages of roasting a chicken in this way, with the full recipe in text thereafter.

Enjoying these Recipes? Please Rate them Below!

Cast your vote for these roast chicken recipes

This chicken is roasted whole. Its cavity is stuffed with fresh sage and onion (perhaps more associated as a breadcrumb based stuffing for turkey) as well as some celery. To further extend the turkey analogy, it is served with a little cranberry sauce.

Oranges and lemons are both very popular flavourants for chicken. Note in this instance that the orange (small clementine) and lemon are firstly simmered in boiling water for ten minutes before being pierced and used to stuff the chicken. This allows their delicious juices to steam out and begin flavouring the chicken from the very outset of the roasting process.

This recipe is similar to the one featured earlier where the backbone was removed from the chicken before it was roasted on top of root vegetables. Here, however, the process is taken a stage further and the chicken is chopped in to individual portions before it is roasted.

Thank you for visiting this page and hopefully you have found it to be interesting and useful. Any comments you have may be left in the space immediately below.