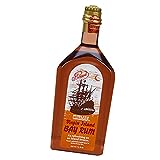 Rum is a name which has been, used loosely as a term for strong drink of any kind, pertains correctly only to alcoholic liquor made from sugarcane. This plant, of Asian origin, was brought to the West Indies in 1493 by Christopher Columbus on his second voyage to the Xew World. The great discoverer had become thoroughly familiar with cane and its sugar while he was a resident of the Portuguese island of Madeira; indeed, even previous to that, in 1478, he had transported a cargo of Madeira sugar to Genoa. The root shoots of cane, known as ratoons, that were planted in the soil of what is now Haiti were the beginning of the Caribbean sugar industry, largest in the modern world- an industry which as early as the middle of the 16th century included the making of rum.

This was a profitable addition because the liquor was distilled from byproducts. Moreover, rum as a transportable commodity had the advantage of requiring less cargo space, besides being so readily salable as to be as good as money in trade with Europe and the colonies of the North American seaboard. The 17th century saw such increased demand that New York and New England set up rum distilleries of their own, using West Indian molasses as material. Historically, rum played a role in the slave traffic. With rum as currency, human cargoes were bought on the west coast of Africa and sold as field hands for West Indian plantations, the planters paying with molasses which, to complete the cycle, ended up as New England rum. Rum was also a medium of exchange in remote outposts of the fur trade.

Modern rums are of two categories: (1) traditional rums and (2) lighter-bodied, less pungent rums. Jamaica ranks as the stronghold of tradition, its noted estates growing special varieties of cane selected for flavor, its distilleries producing dark rum rich in aroma, which increases with aging in wood. The finest London Dock rums, named for their place of storage and blending, are chiefly Jamaican, oddly benefited by the peculiarities of the British climate. Demerara rums, dark as mahogany, are produced in great quantities in British Guiana, part of that output supplying the Royal Navy with its official rum ration. Other distinctive full-bodied rums made under the Union Jack are those of Barbados (first known as Barbados waters) and Trinidad; Martinique furnishes France's best, plus molasses for distillation in the home country.

Lighter-bodied rums are a Cuban innovation dating from the last quarter of the 19th century. Their distillation, carried to a point where much of the pungency (derived from the fermented molasses) is eliminated, yields a product more neutral in character than the traditional rums. Two Cuban types have become standardized in the export trade: White Label and Gold Label, identical except for a touch of caramel with which the Gold is colored. Since 1933 both of these types have been emulated by the rum ii dustry of Puerto Rico, whose exports to the United States have proved of increasing benefit to its economy.