Gordon has been sea fishing and cooking since childhood. He loves coming up with tasty ways of cooking his fresh catch when he gets home.

Why Eating Sustainable Types of Fish is So Important

The Big Fish Fight is a campaign launched by British TV chef Hugh Fearnley-Whittingstall and supported by the likes of Gordon Ramsay and Jamie Oliver. It is aimed principally at putting an end to the process known as discard, which sees untold millions of quality, edible fish returned dead to the sea from trawlers because of quotas and deplorable bureaocracy. In a wider sense, however, The Big Fish Fight is about educating consumers and encouraging them to eat sustainable species of fish, rather than horrifically endangered species, as typified by Atlantic cod. In support of The Big Fish Fight, this page will look at some of the major issues, as well as afford some delicious recipes for what are presently deemed to be sustainable kinds of fish.

Mackerel of various types are found in seas and oceans around the world. These are Atlantic mackerel, which for the moment at least, remain fairly plentiful. If you have perhaps been on a successful mackerel fishing trip, or even have the opportunity of buying whole mackerel from your supermarket or fishmonger's, this is a really simple and foolproof - yet delicious - way of cooking them and obtaining their Omega 3 fatty acid benefits.

The first step is to get your mackerel on to cook. They should be gutted but otherwise left intact. Wash them thoroughly under running cold water and place them in to a fish kettle/poacher or a very large pot. Add plenty of cold water to ensure the mackerel are comfortably covered and a little salt. Put the kettle/pot on to a high heat until the water begins to boil. Turn off the heat immediately, place the lid on and simply leave the mackerel to poach in the cooling water for at least an hour.

As soon as the mackerel have been put on to cook, the salad dressing should be prepared. This will allow time for the different flavours to infuse. Peel the garlic clove and grate it in to a small glass bowl. Add the extra virgin olive oil, white wine vinegar and roughly chopped basil leaves. Stir well, cover with clingfilm and refrigerate until required.

When the mackerel poaching liquid has cooled, prepare your salad. Add the rocket to a large salad dish as shown. Roughly chop the tomatoes and cucumber and scatter them over the rocket. Likewise, add the black olives. The red onion half should be finely sliced and added last of all before the salad is firstly seasoned and the dressing is then drizzled over the top.

Remove the mackerel from the fish kettle or pot to a plate with a large, slotted spoon or spatula. Rubbing them gently with the ball of your thumb should remove most of the skin but this is not essential. Don't worry about serving a little bit of the skin. It is very thin and perfectly edible.

The flesh of the mackerel should peel fairly easily from the skeleton. It is important to use your hands for this process, not only as this is the easiest method but because it allows you to feel for and discard any small bones at the same time. Scatter chunks of mackerel over the prepared salad before taking the dish to the table with the sliced crusty bread and dishing it up on to the serving plates.

Need Help with Finding and Choosing Sustainable Fish and Seafood?

The Big Fish Fight Against Discard

Discard is the concept which inspired The Big Fish Fight. This is the process whereby fish caught up in fishing trawler nets are returned dead to the sea. This can either be due to quotas and regulations or the simple and sad fact that, although the fish are perfectly edible, fishermen know that they are not popular with consumers and thus virtually unsellable. It is this latter fact which makes it so important that people be educated in how tasty these species of fish can be and begin to demand them from their fishmongers and supermarkets.

The short video below shows this upsetting and tragic practice taking place.

Coley is a member of the cod family. It is widely known by a number of different names, which can prove confusing. Although it may not be quite as tasty as cod, if cooked in an appropriate fashion, it can be absolutely delicious and a more than adequate substitute for its severely endangered cousin.

There are many different ways to prepare chips. The potatoes can simply be peeled, sliced and chopped in to chip shapes and fried straight away. The way I like to make chips, however, certainly takes considerably longer but I think the final result is more than worth the effort. The full instructions can be found here.

To cook the coley fillet, a little sunflower oil should be placed in a non-stick frying pan and allowed to come up to a medium heat. The flour should be seasoned and spread on a large plate. The coley fillet should be patted in the flour on the skin side only and placed skin side down in the heated pan.

The celery stick should be sliced across the way to a thickness of about a 1/4". The extra virgin olive oil should be put in to a small saucepan on a low heat. The raisins and celery should be added and the garlic clove peeled and grated in. Season and leave on a low heat while the fish cooks, stirring frequently.

When you can see that the coley fillet is cooked most of the way through (roughly five minutes, depending on the thickness of the fillet,) the heat should be reduced and the fish turned on to its flesh side for a couple of minutes to complete cooking. It should then carefully be removed to a plate with a fish turner. The skin should have crisped nicely and peel off very easily. The skin should be discarded.

The raisins and celery should be scattered over the fish with a little drizzle of the oil. The chips should be served alongisde.

Many people discard the leafy greens when they buy a bulb of celery. These leaves are actually delicious and roughly chopping a few of them provides an excellent final garnish for this and many other dishes.

There is not usually anything particularly difficult about cooking fish. The delicate nature of most fish, however, means that if it is not cooked in the correct fashion, it can very easily be spoiled. This means that there are occasions where having the proper cooking implements and utensils can be the difference between well presented fish and virtual disaster. Below are just some of the bargains which are currently available on Amazon for items related to cooking fish. Take a look at how much money you can presently save and starting cooking those perfect fish dishes to impress your family and friends in no time... 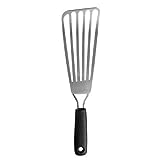 The lime salsa should ideally be prepared at least a couple of hours in advance, or even the night before. The tomatoes should be halved and deseeded with a teaspoon. The cucumber should be halved lengthwise and the seeds scraped out with the spoon. The tomatoes and cucumber should be finely diced and added to a small glass bowl. The garlic clove should be peeled and grated in to the bowl. The red chilli pepper should be finely sliced (deseeding is optional) and three of the basil leaves only finely sliced. Both should be added to the bowl with the extra virgin olive oil, lime juice and salt and pepper to taste. Stir well, cover with clingfilm and refrigerate until required.

The potatoes should be washed but not peeled and added to a pot of cold, slightly salted water. The water should be brought to a boil and then the heat reduced to achieve a simmer for thirty minutes.

When the potatoes have been simmering for twenty minutes, add a little sunflower oil to a non-stick frying pan and bring it up to a medium heat. Scatter the flour on a dinner plate and season with salt and pepper. Pat the salmon in the flour on the skin side only and gently shake off the excess. Put the salmon fillet skin side down in the frying pan.

While the salmon is frying, the bread and cheese should be grated and the remaining two basil leaves roughly torn. The three should be mixed together and seasoned with pepper.

The salmon should be fried until it can be seen from the side to have cooked approximately two-thirds of the way through. It should then be turned and the heat switched off. The salmon will continue to cook in the residual heat and when the pan is placed under the overhead grill but salmon is a fish which should be served just that slight bit underdone to be enjoyed at its best.

The skin should be beautifully crisp and easily peel away. The breadcrumb and cheese mix should then be placed carefully on top, very lightly pressed down to help it adhere to the salmon and the pan placed under a hot grill for two or three minutes until the crust crisps and starts to brown. It should then be carefully removed from the pan with a fish turner and laid on a bed made of the lettuce leaves.

The potatoes should be drained and swirled in a little butter before being added to the plate. A spoonful of the salsa should also be added and a thin slice of lime makes a nice additional garnish for the salmon.

The more people who can be made aware of the issues which are being experienced with regard to fish sustainability, the better. It is vital that the message be put across effectively and that the problem be tackled by the many, rather than the few. If you want to help spread the word, the image to the right is but one example of the dozens of quality products which can be found - bearing the same logo - in the online store linked to below the photo, at frequently more than reasonable prices.

Below are links to other Hub Pages, each of which is dedicated to recipes for a specific species of fish. To access these delicious recipes, simply click on the name of the fish in which you are interested.

Add the soured cream to a small bowl with the dill. Stir well.

Slice the red onion and place it in to a separate bowl with the rocket. Drizzle liberally with extra virgin olive oil, season with salt and pepper and mix.

Toast the slices of bread under a hot overhead grill. While the bread is toasting, peel and very lightly crush the garlic clove to release the juices. Rub the garlic clove over the hot toast as soon as it is ready. It will absorb the juices and flavour.

Make a bed of rocket and red onion on a serving plate for the smoked mackerel fillets. Add the toast and dill soured cream, serve and enjoy.

Cast your vote for these sustainable fish recipes!