How to Make Serbian Musaka with Potatoes

This Authentic Serbian Musaka is Made with Potatoes and Ground Beef

You may know musaka as moussaka, but Serbs spell it musaka.

We serve this as one of the dishes in our Slava meal. Because we enjoy it so much, and because it's healthy , we also eat it at other times. I have made the low-fat version here. You can make it a bit richer by substituting sour cream for the plain yogurt (which is how I used to make it). It will also taste a bit richer if you use the full pound of ground beef the recipe calls for. I cooked the full pound and then put half away to use in something else, since we are trying to cut down on meat consumption. If you aren't, use all the beef you cook here. I have always made this with nonfat milk, but use whole or low-fat milk if you like it better.

This dish can be assembled and covered with foil and then refrigerated until you are ready to bake it -- maybe in a day or two. Allow about 90 minutes of baking time in a preheated oven. Assembly time takes about 45 minutes.The recipe serves six adults as a meal.

One nice thing about musaka is that it's even better the second day, so left-overs are very tasty. They are best when reheated in the oven or toaster oven rather than in the microwave, since the crispness of the top potatoes is lost in the microwave. Now, let's make musaka.

All pictures in this lens were taken by me, unless otherwise noted.

Let's Assemble the Ingredients for Musaka - That way we won't forget anything.

You will need these items to cook the musaka. - If you don't have them, order them now.

To make musaka you will need a large skillet, a one quart glass or plastic measuring cup for liquids, a 3 -quart 13 x 9 x 2 inch baking dish (I prefer glass), a potato peeler, a good knife to cut potatoes, and a wire whisk. I'm assuming you have most of these, but if you lack one of them, now's the time to get it, since these are all essential kitchen items.

Pyrex Grip-Rite 3-Quart Oblong Baking Dish Clear
This is similar to mine, but this one has longer handles (which is what accounts for it's larger dimensions) than mine, so that it will go in and out of the oven more easily.
Buy Now

Before we get started, let's get the musaka baking pan ready.

Measure 3 tablespoons of the olive oil into the baking dish. Tilt the dish up and down and from side to side until the oil is evenly spread on the bottom of the pan. Sorry the picture didn't turn out as well as I had hoped, but I think you get the idea. This is very handy for blending the topping. 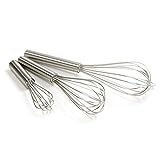 Norpro Balloon Wire Whisk Set of 3 Stainless Steel Stir/Mix/Beat 6" /8"/ 10"
I would have a terrible time in the kitchen without my balloon wire whisks. I've had cheaper versions, but they don't hold up as well and are harder to clean.
Buy Now A reliable peeler is essential for making this dish.

Trudeau Peeler, Trutensils
A great peeler is worth its weight in gold. A poorly performing peeler causes no end of grief. This is reviewed to be a great performer.
Buy Now

Now we can assemble the musaka - First let's start peeling and slicing the potatoes. More about baking and serving the moussaka

The moussaka should bake at 400 degrees F. I cook it covered as shown in the photo for an hour. Then I take the cover off and continue to bake it until it is easy to poke a cooking fork though the potatoes, and the top is golden brown as it is in the last photo. The moussaka is now ready to serve. Cut it into squares for easy removal.

I normally serve this with either a green salad, a three-bean salad, or a Serbian tomato salad. A crusty bread will complete the meal.

The Greek Version of Moussaka is Made with Eggplant

Do you have a strong preference for moussaka made with either eggplant or potatoes?

Do you have a preference for making or eating moussaka (musaka) with eggplant or with potatoes? Or do you like it any way you can get it?