"Three most deplorable things in the world: the spoiling of fine youths through false education, the degradation of fine paintings through vulgar admiration, and the utter waste of fine tea through incompetent manipulation." - Lichihlai, a Sung poet

A perfect understanding of how to boil water and steep a tea bag doesn't necessarily contribute to a perfect cup of tea! There is a little more to the art of making tea than that. These tea tips are not only for tea drinkers who would like to refine their tea preparing skills, but also inquisitive individuals who want to become more discerning about this nourishing beverage and its culture.

I sometimes get nauseated by haughty wine tasters who can spend hours boasting about their sophisticated nose and well-trained palate. "All right! You're very knowledgeable about rotten grape juice. How impressive!" That's what I always want to say to them, but of course, have never gathered enough courage to do so. As for tea tasters, I often find them more businesslike in attitude and less snooty about their skills. One thing both wine and tea tasters have in common, however, is the fact that they like conversing in codes. In other words, they often use a lingo that people outside their circle might not fully comprehend. These are some of the terms you might hear tea experts use to describe their revered beverage:

Brassy - Unlike a brassy person, a brassy tea is not necessarily unpleasant. It just has a strong bitter aftertaste, which certain tea drinkers might actually like.

Bright - This does not only construe the color of the tea but also its freshness. When a tea taster says that the tea is bright, it usually means it is fresh, high quality and not dull in appearance.

Brisk - Most tea drinkers love their tea to be brisk, as it means the tea is well-fermented and extremely aromatic.

Flat - Just like a flat performance, a flat tea is disappointing in many ways. It refers to a stale tea that has been exposed to too much moisture and lost most of its aroma.

Full-bodied - It is tea tasters' term for "awesome." A full-bodied tea is rich in flavor, intense in aroma, and pleasant in color. In fact, wine tasters use this to describe a high-quality wine as well.

Greenish - When tea experts consider a tea to be greenish, it doesn't mean the tea is fresh or emerald in color. In a tea taster circle, this word has a negative meaning; it depicts a tea that is under-fermented and therefore weak in flavor.

Long in the mouth - Many of you can probably figure out what this means. It describes a tea with a long-lasting aftertaste.

Tainted - This is probably worse than brassy, flat and greenish combined. When an expert labels a tea as "tainted", it means the flavor is really off due to chemicals used in cultivation or pollution during transportation.

These terms can be very useful if you want to have a serious conversation with a tea taster or sound like one yourself. Other than that, you may not really need to use them. I'm a pretty hardcore tea drinker myself, but I hardly ever use these words to critique my tea. When the tea is good, I would normally say, "I like it." And when it doesn't please me, I would simply declare, "It sucks!"

You will not be considered an elite tea drinker unless you can name at least ten well-known types of tea and understand their distinctive characteristics. So here is a little list of legendary teas, some of which have been in the spotlight for centuries:

Assam - This famous tea is from northeastern India. It is very intense in aroma, bright in color, and a little malty in flavor.

Chai - Chai is another Indian tea that has become a celebrity in the western world. Traditionally, it is made with milk and spices, such as cinnamon, ginger and cloves. That's why there's a fine herbal flavor in it.

Darjeeling - Grown in the foothills of the Himalayas, Darjeeling is regarded as Indian's most exquisite tea. Its color is slightly yellow while its taste is very strong and a little fruity.

Earl Grey - This Indian black tea is named after a British Prime Minister, Charles Grey. Legend has it that Earl Grey found the Indian tea imported to England in the 1830s to be too tart, so he created his own version of Indian tea by adding a bit of bergamot oil and orange to it. As a result, Earl Grey tea contains a sweetish and slightly acidic flavor.

English Breakfast - This so-called English tea was actually invented in Scotland. It is a concoction of various types of black tea, which come out together as a refined beverage with a floral and toasty scent.

Gunpowder - This green tea with a slightly peppery taste and an ominous-sounding name is originally from the Guangdong province, China. The tea is called "gunpowder" due to its smoky aroma and the fact that its rolled-up leaves tend to hugely explode in size during the brewing process.

Matcha - Matcha is the strongest of all green teas. Its taste is grassy and bittersweet. Its consistency is thick and a little frothy. This famous tea is the one used in the traditional Japanese tea ceremony.

Oolong - This special tea is titled the "Champagne of teas." It is neither green nor black tea, but falls between the two categories. Its whole leaves are briefly fermented, thus it doesn't contain the raw grassy taste like most green teas do. In addition, Oolong is much less astringent than black tea and contains a sweeter aftertaste.

Pu-Erh - This is the only tea on the list I have never tried, because its price always makes me wince. A little cup of Pu-Erh tea usually costs around $50. Unlike other teas, the majestic Pu-Erh is produced in a similar fashion to wine. It is fermented twice, then pressed into teacakes and allowed to mature in a bamboo basket for decades. People who are fortunate enough to try this tea mostly agree that it has an incredibly intense flavor but is not at all bitter.

Sencha - Sencha is the most popular green tea in Japan nowadays. Its flavor is similar to Matcha but a bit milder, and the consistency is not as thick.

Making a Perfect Cup of Tea 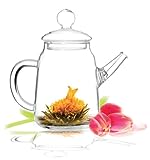 Tea is abundant in fluoride, a dental nutrient that strengthens tooth enamel and accordingly protects our teeth from plaque. However, like coffee and red wine, tea also contains tannins, an astringent compound that might stain our teeth. So are tea drinkers all doomed to carry a yucky yellowish smile? Not necessarily. To keep your teeth white and shiny without having to quit drinking tea, try to rinse your mouth with water several times a day. Avoid the high tannin content in black tea, and opt for green or white tea instead. Choosing iced tea over the hot version also helps, as heated liquids can penetrate tooth enamel more easily. In case you are keenly concerned about the whiteness of your teeth, always use a straw to drink your tea; this can minimize the impact of tannins on the teeth.