What Is Your Favorite Breakfast Food?

Breakfast Is The Most Important Meal Of The Day

Breakfast is the most important meal of the day, we ought to really eat a good breakfast to help kick-start our bodies into action. However your favorite breakfast food might be what your brain tells you that you want to eat when you get up in the morning and that might not be something that is actually good for your body. While your body is telling you that a nice bowl of oatmeal might be nice, your brain could be craving pancakes and maple syrup, bagels and cream cheese or a sugary donut.

I didn't always eat as healthy as I do nowadays, but as I have got older, I understand the importance of trying to stay healthy, and starting the day off right (well most of the time) is a good way to help keep your body in shape and to prevent problems later in life.

I have to admit that the breakfast plate you see here, of Bacon, Sausage, Baked Beans, Fried Egg and Bubble & Squeak (left over potatoes and vegetables fried up in the skillet) isn't that healthy, but this is the type of breakfast most of us of my generation grew up with in England.

I am curious to find what you deem to be a good way to start the day, or are you a Cappuccino, Bagel or Donut person, maybe a Cereal and Banana one, or do you feel the need for a good cooked breakfast to start the day?

How To Cook A "Full English" Breakfast

Begin with the items that take the longest to cook - Sausages, Bacon, Tomatoes

Next the quicker items - Baked Beans, Eggs etc. I like to slice my Sausages so the insides brown.

What Is A "Full English" Breakfast?

A "Full English" breakfast is what we in the UK used to have regularly to start the day, but with eating habits being rather more healthy these days, it's something that is more often than not reserved for the weekend or for when you are on vacation, rather than being eaten every day of the week.

The emphasis here is on the word "full", since a "Full English" is usually a large plate full of food.

Traditionally the sausages and bacon would be fried in fat, which they of course added to, and then slices of bread would be cooked in the fat and served on the plate (Fried Bread), which of course is truly unhealthy, especially since the fat used years ago was Lard and not corn oil. More often than not you will now see Toast used instead, a more healthy option.

The eggs are usually served fried, which in the UK means dried in a skillet of oil/fat, the hot oil being flicked over the top of the eggs as they cook, rather than flipping the eggs over on a griddle as in the USA. This results in the egg white being cooked well, but the yolk being still runny, and we love to dip everything in our egg yolk in the UK.

But not everyone likes their eggs fried, so you also find poached eggs or scrambled eggs being served with a Full English Breakfast.

Our bacon is thicker than that served in the USA, and leaner too. It's got a different taste, less of the fatty taste, and the sausages have a stronger taste as well.

Other ingredients you will often find in a Full English breakfast are Black Pudding (a sausage that is made of congealed pigs blood, also eaten in Latin America and known as "Morcilla"), Fried Potatoes (cubes of potato cooked in the skillet, often substituted with Hash Browns these days as we get more Americanized), and not forgetting Bubble and Squeak (which you can read more about later on).

A Full English Breakfast is definitely guaranteed to fill you up and believe it or not people sometimes follow this by toast and marmalade as well.

What Is Bubble & Squeak?

Bubble & Squeak is a British dish that is made from left over vegetables and potatoes, mashed down and fried over in a skillet.

It's great for Breakfast with Bacon, Sausage and Eggs, but is also good to eat at any time of the day.

Bubble & Squeak originates (or so I believe) from having to find a way to use up the leftovers from the Sunday roast, which is a British tradition in itself.

There would always be vegetables and potatoes left over, and frying them up together helped to turn them into another meal, and it's a good way to help alieviate waste, as well as tasting good.

Bubble & Squeak can be served with cold cuts of meat left over from the Sunday roast, but more often than not it's served for breakfast/brunch with sausage, bacon, baked beans and eggs.

From An Unhealthy Start To A Healthy One

I grew up often eating Bread and Dripping for breakfast, which is probably one of the most unhealthy things to eat by today's standards.

Dripping is the fat and juices collected from the roasting pan after a Sunday Roast, and was commonly used as a topping for bread years ago when I was young.

The dripping was allowed to go cold in a bowl, and you would spread the fat onto bread or toast, ideally finding a nice lump of jellied gravy at the bottom, topping with salt and white pepper.

Now I have to admit that this was something the little "porky" me looked forward to in the morning, but apart from the fact it's completely unhealthy, nowadays it's hard to find a roast large enough to give some decent dripping.

These days I usually start the day at home with a glass of Orange Juice, then when I get to work I have a Banana and a mug of Green Tea. About an hour later I have a good bowl of Oatmeal, with Applesauce in it. This saves having to add sugar. Sometimes I substitute Honey though for the Apple Sauce, and Organic Honey is really good for you.

So that is my way of staying healthy these days, filling up with good warming nourishing food, and by eating my breakfast mid-way through the morning, I don't usually have cravings for food when it comes time for lunch, so I can make do with something light (or nothing at all) until the evening.

Breakfast for most people just wouldn't be complete without COFFEE, and for many not just any old coffee will do either.

These days coffee machines that make your favorite coffee are very affordable, an Espresso Coffee Maker with a Steam Attachment means that you can not only make Espresso at home but you can also make Cappuccino or Latte style coffee as well.

What a great way to start the day, the smell of Espresso. Doesn't even the thought of the smell of fresh coffee make you feel like buying one?

No Breakfast Is Complete Without Juice

A large glass of Fruit Juice first thing in the morning is the best way to wake your body up and to ensure that you have enough Vitamin C to give your immune system a boost.

While buying fruit juice in the store is easy, you nevery really know what is in it. Often what you buy is based on concentrate, with added colorings, sugars and preservatives.

It's a lot more healthy to make your own juice, and juicers don't have to be expensive, and it tastes so much better when it's freshly made, don't you think?

Eggs are a great way to start the day, and there are so many ways you can prepare eggs for breakfast. What's your favorite way to eat them?

The Good Egg: More than 200 Fresh Approaches from Breakfast to Dessert
Buy Now

You can do far more with eggs than you might imagine, and eggs at breakfast time no longer need be cooked the same old boring way.

Breakfast doesn't have to mean Boiled Eggs, Scrambled Eggs, Griddled or Fried Eggs any more. There are some wonderful things that you can make with eggs for breakfast, including Omelettes, Fritatas, Breakfast Casseroles and much more.

The Good Egg cook book has some great new ideas on how to spice up your breakfasts by putting a new twist on how you cook with eggs. 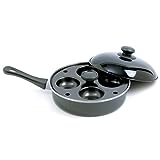 I love poached eggs, and while my wife prefers to cook them by cracking the eggs into a saucepan of boiling water, then retrieving them with a spoon when cooked, the white part of the egg can end up in lumps spread across the saucepan, and it does take a bit of cleaning afterwards too.

I grew up with my Mum using an Egg Poaching Pan which was far less messy and which produced poached eggs that were a round even shape.

Poached eggs are less fatty than fried or griddled eggs, and they are really easy to make if you have a poaching pan, especially when camping. They also are a lot easier to clean, especially if they are non-stick like the pan featured here.

Anyone For Toast? - Toast is one of my favorite ways to eat bread, and to make the best toast you need a great toaster.

Toast is something that is quick to make, and it's also a good way to use up bread that is a few days old and that is past it's best for using in sandwiches etc.

I love my toast with jam or marmalade, sometimes with honey, and sometimes with peanut butter or marmite (vegemite) which I know most Americans hate, but just try spreading it really thin and I think you might change your mind about it.

Toast is also great for making toasted cheese sandwiches, or sausage or bacon sandwiches as well. Sometimes I prefer a bacon sandwich in toast rather than bread, because toasting the bread brings out the flavor more, and the smell of bacon and toast cooking go together really well.

While you can make toast under the grill (broiler) or in a toaster oven, a toaster is often a lot easier, and with different settings you are less likely to burn (cremate) your breakfast too.

A breakfast sandwich is a great cross between just having toast and having a full blown cooked breakfast.

There are some great books available to give you exciting new combinations of items that you can use in your breakfast sandwiches. This book has some good examples, plus you can create your own recipes, depending on what you have in the kitchen.