Based On a 1940s Wartime Recipe for Cheese, Tomato and Potato Loaf

As my main hobby is genealogy I love to appreciate how my ancestors lived, one way being to recreate recipes of their day; in this case the sort of food experienced by my grandparents subjected to food rationing of the 1940s during the 2nd world war.

Except as a vegetarian I often have to adapt the recipes to my palate e.g. use margarine instead of lard (animal fat) etc., which undoubtedly does change the flavour and texture of the original dish but nevertheless can still often produce a tasty and invariably more healthy variant to the dish.

The recipe is meant to be served with salad and to serve four. We didn't have salad to hand so I used baked beans instead and it served two. Perhaps we have bigger appetites these days although for two it was surprisingly filling;

I used half the potato and half the cheese that I would normally use for a cheese and potato pie topped with tomato yet it was as filling and therefore a much healthier menu. Serving for four might leave your guests a little hungry afterwards unless they have small appetites or its part of a two or three course meal.

The original wartime recipe included breadcrumbs and was called a bake rather than pie. I've adapted this recipe to make it a vegetarian dish e.g. substituting margarine for lard. The original recipe was meant to be served with salad but for a tasty meal it goes equally as well with baked beans.

Cast your vote for Tomato and Potato pie in cheese sauce

Most people when boiling potatoes add salt, I don't because of the health hazards of too much salt in our diet; see my hub article on the subject of salt for further information on this topic and then decide for yourself.

In 3 or Optionally 4 Stages

The original recipe says 30 minutes preparation time, I would suggest a little longer unless you have asbestos hands in that once the potatoes are cooked you're meant to slice them so you may wish to let them cool a little first before slicing them.

The three to four stages of preparation being:- 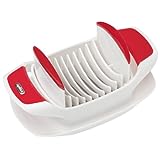 ZYLISS Easy Slice Tomato Slicer
For recipes like this I like to use a tomato slicer rather than trying to slice the tomatoes into thin slices by hand. This two part tomato slicer, with eight sharp and serrated stainless steel blades; with integrated dish to catch excess tomato juice and seeds, is just ideal and should certainly be easier and quicker than the hand held tomato slicer I currently use e.g. in that you place the tomato on the base and just push the top cutting blades through it.
Buy Now

The original recipe says use 1Ib (450gms) of New Potatoes. I had New Potatoes to hand but I think using New Potatoes in a pie is such a waste; I'd much rather use them at their best in a menu e.g. just boiled and served whole with a knob of butter (margarine) with vegetables and vegetarian gravy.

I think the idea of using New Potatoes is that they are the right size for this recipe e.g. small. However I used ordinary potatoes, peeled and boiled. Normally I wouldn't peel the potatoes for a potato pie but for this recipe I don't think it would work as well if they weren't peeled. As it happened the potatoes to hand were quite small anyway but if they weren't halving and optionally quartering them (if very large) would still work.

Any cheese sauce will do but the one in the recipe requires:-

The method proposed is to melt the margarine in a saucepan, add the flour then the milk and whisk (or stir) as the sauce comes to the boil and thickens. Take the sauce from the heat, add the cheese and gently mix in until the cheese is melted.

I begrudge paying for breadcrumbs when you can make your own quickly and easily for nothing. Don't use stale bread and fresh bread (without drying out in the oven) is too soft. Crusts, which a lot of people don't like, are ideal and you can mix your bread e.g. wholemeal and white together; so nothing goes to waste.

Once ground you can add your favourite dried herbs and spices for additional flavouring and apparently these breadcrumbs can be kept in the fridge for up to six months although I've never tried it so any feedback on this from anyone who makes and keep their own breadcrumbs would be appreciated.

Experimentally I greased the sides of the casserole dish with margarine as instructed, tipped in the breadcrumbs and swirled them around so that they stuck to the margarine; it worked fine but it was such a thin layer that I don't see what the point is and in future I'll not bother with this stage of preparation.

This is the easiest phase of the operation (when everything comes together) and apart from the delight in making a good cheese sauce, successfully making breadcrumbs and of course the final act of eating and enjoying the fruits of your labour, the more rewarding phase.

What's in the Name?

Adaptation of an Old Recipe

I like easy options, sometimes a recipe will make something complex, when with a little innovation you can make it much easier and quicker and still very rewarding. I adapted this recipe idea from the original in a book 'Cooking for Victory' which I was given as a gift recently, but searching Google found the original recipe has been coped across the web widely; so I can only conclude that it is a popular recipe and certainly my variant was very tasty and filling.

The original recipe is called a loaf, not sure why because it's nothing like a loaf except that the casserole dish is greased with margarine and then sprinkled with 1oz (25gms) of breadcrumbs which sticks to the margarine. I don't think this is necessary and I can't see that it serves any useful purpose; nevertheless I had a go at making my own breadcrumbs for the experiment, and it worked, although I think it's superfluous and in future not include it.

Do You Use Butter or Margarine