Oh, vegetarians are so weird!

If you don't eat meat, have you ever been called weird?

Quite often, I've been told that I'm weird because I don't eat meat or fish. Some people are much more polite, of course, and simply suggest by their facial expression that I'm really rather odd because of my weird diet.

Men sometimes give me the impression that they are thinking 'oh well, it's just another female foible' and then they discover that my other half is much stricter about his vegetarianism than I am. After all, real men don't even eat quiche supposedly, real men eat big juicy steaks and plenty of 'em.

What a very strange couple we are. We must be.

We prefer healthy food (not all the time - we do have some chocolate hidden in the pantry, we're complete cheese-monsters and have wine with dinner every evening). We believe that we're helping the planet by not eating meat.

We know that we're saving money by not eating it. We love food and we enjoy every meal we have. We never take delicious food for granted.Oh, how very odd we must be.

Let me tell you why I'm writing this.

Recently, in the UK, meat has been in the news for two reasons. The first is that beefburgers sold by a supermarket chain were found to contain not only beef - but horse too.

England being England, the uproar is more about misrepresentation than anything else. If you buy beefburgers, people say, you expect the meat used to be beef.

My mum would have said 'Just be thankful you've got food - never mind where it comes from.'

But there are those who are repulsed by the thought of eating horse.Shortly afterwards another story broke. Halal meat that was supplied to UK prisons for Islamic inmates was found to contain pork, and the religion bans the eating of pork.

So it seems that it's not straightforward being a meat eater either. Depending on the society you live in, your local culture, or your religion, there are meats you can eat and those you can't.

CONVERSATION WITH MY SISTER-IN-LAW

Have you read Watership Down? It's about rabbits. The film came on the TV one evening and I said something to my sister-in-law that I'd seen on a t-shirt. I just thought it was a funny slogan - 'You've read the book, you've seen the film, now eat the stew.' My sister-in-law was furious with me.

Of course, it isn't really. Everyone has the freedom to pick and choose what they eat and where they draw the line. (As a half-hearted vegetarian I once failed miserably in persuading my other half that really, it would be OK if I ordered escargots as they were only a sort of slightly mobile mushroom - 'anything with a face' he said, winning the argument.')

CONVERSATION WITH A MARTIAN

Martian: So, Earthling, I'm here today to discover what you people take in for nourishment. I understand that you consume dead animals, is that right?
Earthling: Well, that's not a very nice way of putting it ...
Martian: Oh really? I apologize. I was told that you did.
Earthing: Well, I suppose ... well, we do eat meat.
Martian: And that is ....?
Earthling: Um ... animals.
Martian: Not alive, presumably?
Earthling: Ah, right, yes, OK ...
Martian: So that animal you have there is your lunch?
Earthling: Absolutely not! That's Bonzo, my little dog. The very thought of eating dog!
Martian: And that animal there in the field?
Earthling: Oh no! Not at all. That's a horse! Dear me...
Martian: What about that black and white one in the next field?
Earthling: Oh yes, that's OK to eat, that's a cow.
Martian: Hmm ... I see that I have to ask my boss for extra time on this research...

TO EACH HIS OWN

I have had people comment about my 'vegetarianism' in the past because I wear leather, love cheese, drink wine ...

I don't eat meat because I don't like it, I don't like paying for it, I think it's unhealthy and I believe that the entire industry is ultimately bad for the planet. My husband is vegetarian because he is concerned with animal welfare. So if I see French Onion Soup on the menu but it's made with beef stock, that's no problem for me. But there's no way my other half would touch it.

Who's right and who's wrong? As far as I'm concerned, there are no rules.

We're lucky that we have such a huge choice of foods to choose from today. My mum often talked about the war years when food was scarce. In those days, she said, people were thankful for any food and couldn't afford to pick and choose.

OK, so vegetarians are weird?

Even if you're a long time vegetarian like us or if you're new to meat-free meals you can find a huge amount of inspiration from good old fashioned cookery books. Expert chefs and people who have been cooking without meat or fish for years have written some fabulous recipe books that are an inspiration to us all. They're very reasonably priced and can be easily ordered online. If I find that my cooking gets into a rut, it's great to have books to refer to.

When I had the health food store, I often had customers who were worried mums telling me that one or more of their children had just decided that they weren't going to eat meat or fish. Did they need any special equipment for vegetarian meals, they'd ask? The answer is no, but there are some appliances that can help us all eat more healthily, vegetarian or not. 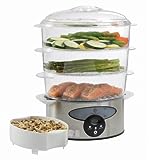 Use a good quality blender to whip up soups, smoothies and sauces in no time.