Generally defined as being the fermented juice of fresh grapes, wines are also made from dried raisins or other fruits such as peaches or blackberries. Wines are usually classified as dry or sweet and may be red, white or pink (rose) depending on the type of grapes used. There are table wines, which are usually drunk with meals; fortified wines, to which extra alcohol has been added, and which are taken either before or after meals; dessert wines which are sweet and generally served with dessert or fruit; and sparkling wines, such as champagne, which are traditionally used at times of special celebration.

The earliest record of wine is found in the Bible (Genesis 9:20), when Noah planted a vineyard. Archaeological evidence shows that viticulture (vine growing), which probably began in Armenia, had spread to Mesopotamia and Egypt by 3000 BC, for the tombs of this era contained bodies lying on layers of grapes. Pottery jars have also been found inscribed with the details of the vintage and name of the grower.

Wine was produced by the ancient Greeks before the fall of Troy (circa 1184 BC) and they invented a better way of pressing the juice from the grapes, as well as coating the insides of their porous jars with resin. Wine was introduced to China about 128 BC, when General Chang Chien sent grape seeds home from Bactria, but it did not become popular until the reign of Tai Tsung (AD 627-649).

Most wines are named after the district in which they are produced. The famous French wines are grown in Burgundy, Bordeaux, Rhone and Champagne. The quality of German wines is very high and many are more expensive than the best French wines. The most famous are Rheingau, Moselle, Bernkasteler, Piesporter and Wehlener.

Spain produces huge quantities of wine. One of the most popular is sherry, which comes from Jerez de la Frontera, not far from Gibraltar. Various sherries are Finos, Amontillados, Amorosos and Olorosos. Apart from being a popular table wine, sherry is widely used in cooking. Portugal produces a rich, fruity wine called port which is a dark, ruby color and is not at its best until it is at least 20 years old. Many good wines are produced in Italy and some of the finest come from Piedmont, Lombardy, Liguria, Tuscany, Terlano, Merano and Santa Maddalena.

Wines are produced from the fermentation of different varieties of the grape species Vitis vinifera. The color comes from the skin of the grapes. Red wines are produced from dark-colored grapes, white wines (which are really yellowish-green) are generally made from light-colored grapes, although some are the produce of dark grapes. Pink, or rose, wines result from the use of grapes with a small amount of color in the skins or from the separation of the juice from the skins soon after the fermentation process begins.

The composition of the grapes affects the quality of the wine and is largely determined by the climatic conditions under which they are grown. The amount of sugar in the grapes depends on the warmth of the climate which may vary from year to year or from district to district. Grapes grown in cooler conditions often need added sugar to enable them to ferment sufficient alcohol, whereas the crops of warmer areas need no added sugar. Colder conditions also cause the grapes to retain their acidity, producing wine of varying flavor and quality.

This is the reason why wines from the same vineyard may vary, sometimes considerably, from one year to another.

The grower watches his grapes carefully and takes small samples regularly in order to decide the best time for harvesting. At the peak of their maturity the grapes are cut from the vines and carried in boxes or baskets to the winery where they are pressed by means of rollers or rotary paddle crushers. They are then placed in an open tank with a small culture of pure yeast and left to ferment, when their sugars are converted to alcohol and carbon dioxide while their skins supply the flavor and color.

These vary according to temperature and length of time of fermentation. The wine passes through a process of filtration to clear it of sediment and is often aged in wood before being bottled.

From Vines to Wines: The Complete Guide to Growing Grapes and Making Your Own Wine
Buy Now 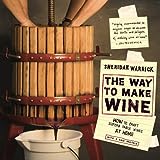 The Way to Make Wine: How to Craft Superb Table Wines at Home
Buy Now 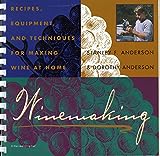 One of the very first fruits to be domesticated, grapes have been eaten by Man from the earliest times. They are extensively cultivated throughout the temperate regions of the world for consumption as fresh fruit; dried into currants, raisins and sultanas; crushed into grape-juice; and fermented to produce wine, brandy and wine-vinegar.

The Old World grape, Vitis vinifera, the oldest cultivated species, is believed to be native to West Asia and to have later been transplanted to Europe. In its wild state, the fruit is small and sour but over the years many cultivated varieties have been developed that bear grapes in many sizes, shapes and flavors, with or without seeds. Vast vineyards now flourish in the warmer parts of France, Germany, the Netherlands, Spain, Portugal, Italy, Greece, Africa, the United States and Australia. In colder countries, such as Great Britain, grapes are generally grown under greenhouse conditions. In Hampton Court Palace, near London, is a huge and famous grapevine that was planted under glass in 1769 and bears up to 500 large bunches of grapes each season.

Some grapes are grown for wine-making, but some of the crop is processed into dried fruit, the crop being harvested towards the end of summer. Currants are the first to be picked and they are spread on hessian racks to dry. In late summer the sultanas are picked and dipped in a solution of potash and emulsive oil before being spread on the drying racks. The last to be picked are the raisins, which are also dipped before drying. The dried fruit is sent to the packing-plant, where it is prepared for sale. The stems and dirt are removed, and the fruit is washed, dried, inspected and packed.