Do You Collect Coins?

Silver coins are an enjoyable, interesting and relatively inexpensive way to track American history while at the same time owning some of the most stunning non-circulation coins created by the United States Mint (and others).

Here are a few of my favorites.

This one was releases in February, 2016 in both silver and gold editions. The gold version quickly sold out --creating a backlog. The silver and gold coins come in proof or uncirculated versions.

First of all, it's Mark Twain -- arguably one of America's premier authors. The front of the coin uses a strong portrait of Twain smoking a pipe. According to the U.S. Mint, the reverse side of the coin features,

The knight and horse from A Connecticut Yankee in King Arthur’s Court, the frog from “The Celebrated Jumping Frog of Calaveras County” and Jim and Huck from Adventures of Huckleberry Finn.

The Silver Proof version sells for slightly less than $46 during the introductory period which began in February..

This is the latest offering from the U.S. Mint and like most, if not all, of the commemorative coins there are several options. You can get gold or silver and both options are available in proof or uncirculated varieties. With the U.S. Marshall coin (and others) there is also a clad half dollar. The metal in a clad-coin is similar to half-dollars used in circulation coins.

The Silver Proof version sells for slightly less than $47 until March, 2015 when the price will be increased to around $54.

Pure and simple, it has a very striking design -- all the way down to the Wanted Poster in the hand of the U.S. Marshall. The coin has an old-West feel to it which is intentional. According to the U.S. Mint,

The Silver Proof version sells for slightly less than $46 during the introductory period. Ten dollars of each coin's proceeds is earmarked for several Mark Twain museums. 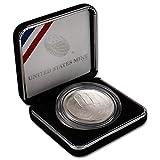 I purchased this coin as soon as it was released because of the subject matter. Obviously, Lincoln played a huge role in our country's history and the U.S. Mint released this coin on the 200th anniversary of Lincoln's birth. The heads side of the coin features a prominent image of Lincoln -- an image not used on other coinage.

The reverse side is engraved with the last 43 words of the Gettysburg address.

Lincoln is one of the most important presidents in our country's history and the Gettysburg address was one of the greatest speeches delivered by a politician. The proof version of the coin, with its mirror finish, make Lincoln's image stand out. It's just a beautiful coin. This is the coin that introduced me to the commemorative coin program. The coin was released to celebrate the 400th anniversary of Jamestown and the heads side of the coin features an image of three different individuals representing the cooperation required for the colony to survive. The back side of the coin showcases the three ships that brought settlers to Jamestown: Susan Constant, the Godspeed and the Discovery.

This is another extremely well-designed and crafted coin. The images are crisp and do evoke a feeling of pre-colonial America especially through the use of Captain John Smith's image. In its promotion for the coin, the Mint describes it this way:

The colony at Jamestown also produced one of the earliest iconic figures of colonial history. Captain John Smith was one of seven council members identified in sealed orders to govern the new colony. Smith led the settlers through the struggles of a harsh winter, the spread of disease, and the often challenging relationships with the Algonquian Indians.

Of all the coins I have collected, this is possibly the least visually appealing. The coin's front side features a portrait of Edison -- which looks good -- but the reverse side of the coin falls flat, I think, with its depiction of the light bulb. The coin was released to honor the 125th anniversary of the invention of the lightbulb.

Although this coin is the least visually appealing of all the commemoratives I've collected, the subject matter was what attracted me to the coin. After all, Edison's inventors improved the quality of life for most of us.

This is an elusive one because it commands such a high price. The coin is basically a replica of the 1930s Buffalo Nickel. It is one of the fastest selling commemorative coins offered by the U.S. Mint. The coin was on sale on June 7, 2001 and two weeks later all 500,000 coins had been purchased.

This coin is also offered annually as a 1-ounce gold bullion -- and is one of the Mint's most popular gold options.

As a kid collecting buffalo nickels was a pastime since a few were still in circulation (as were mercury head dimes). The nickel represented a change in U.S. coinage in the years after Theodore Roosevelt, who openly admitted he was disgusted with the coin designs in circulation, and made it his mission to have all the coinage redesigned. When the original nickel was created in 1938, three Native Americans modeled for the profile: Chief Iron Tail, Chief Big Tree and Chief Two Moons

The coin was authorized to commemorate the National Museum of the American Indian of the Smithsonian Institution, the museum's opening, and to supplement the museum's ongoing endowment and educational funds.

Although, it may seem like common sense, two things to consider when collecting silver coins are:

The mint actually sold two versions of commemorative coins for Ben Franklin. One was him as a scientist and the other was a more traditional looking bust image in the Founding Father coin -- which is the one I purchased.

I preferred this coin over the scientist version simply because it's more in align with historical-looking coins that I collect. The reverse side of the coin is also historical in design since it contains images from the 1776 Continental Dollar -- a currency originally designed by Franklin.

This is actually the first commemorative coin issued by the U.S. government and Congress authorized 5 million half dollars to be minted. The coins were sold during the 1892 World’s Columbian Exposition to honor the 400th anniversary of Columbus discovery of the New World. It features a bust of Columbus on the heads side. The back contains the image of a ship.

Due to the overwhelming popularity of the 50 states quarter program, in 2010 the Mint began selling 5 ounce silver bullions based on the quarters. Of those released so far, in my opinion, two stand out: 2013 Mount Rushmore and 2014 Smokey Mountains. Since these 'coins' are five ounces, they will always be worth the equivalent of five ounces of silver.

Launched in 1986, this is the U.S. Mint most popular ongoing silver coin. The Eagle is sought by collectors and is used by many as an investment vehicle. However, my interest in the coin is simply based on its look.

The coin mirrors the design of the Walking Liberty Half Dollar which was minted for circulation from 1916-1947.

Although all the U.S. Mint coins have a currency value (usually one dollar for silver and $50 for gold), the silver content makes them worth, at minimum, the market value of silver -- currently around $20.

Besides U.S. Mint products, you can also purchase bullions shaped like coins that are not currency. One of the most popular private manufacturers of this type of collectibles is Englehard. Over the years they have produced a wide range of products, but by far my favorite one is the American Prospector bullion. I currently own a 1985 version which has the prospector mining for gold on the front and the American eagle on the back.

The various U.S. and Canadian versions were minted throughout the 1980s.