One of my favorite hobbies as a kid was collecting baseball cards. In fact, I still enjoy the hobby; although on a much smaller scale. I have many fond memories of saving my nickels and dimes (yes, you could still buy a pack of cards for under $0.50 back in the '70s) heading to the local “dime store” and barely making it out the front before ripping open every last pack. It was fun. It was exciting. And I can still smell—and taste—the aroma of that infamous Topps chewing gum in all its wafer-like pink glory!

Ahhh… the smell of it!

1952 Topps baseball cards are, in essence, the groundbreaking set that defined the hobby; the epitome of baseball card collecting.

What makes the 1952 Topps Baseball Cards So Groundbreaking?

Topps’ 1952 baseball release is the prototype for every major subsequent baseball card issue for four reasons:

It was this final feature (that was initially conceived by Topps as a mistake) that paved the way for every Topps baseball card release through the year 1973. Ask any collector of vintage Topps baseball cards and they'll tell you: Those high numbers sure can be tough...and expensive!

The Legend Behind the Topps 1952 Baseball High Numbers

As mentioned earlier, Topps issued the 1952 baseball set in 2 series: Series 1, 1-310, early in the season and series 2, 311-407, later in the season. Since sales were dramatically slower for series 2, many of the unopened packs were left unsold and eventually destroyed by being dumped in the Atlantic ocean. The fact that Topps chartered the boat to get rid of their 'so-called' excess inventory only adds to the legend of the 1952 baseball set; not to mention that included in that high number series is the card many baseball card collectors consider to be the holy grail of baseball card collecting: The Topps 1952 Mickey Mantle rookie card.

Oh to have been there that day with a large pickup truck and a tank full of gas…I can only dream...

Other notable cards so willingly drowned on that fateful day in 1952 were the likenesses of many Hall of Famers including:

As you can see, there were quite a few choice cards sent to old Davey Jones' locker that day. What a shame! What a shame indeed! Nevertheless, the legend increased.

How many 1952 Topps Baseball Cards Do You Own?

Sy Berger: The Man behind the 1952 Topps Baseball Card Set

In 1952, the Topps Chewing Gum Co. was not known for their baseball card sets. That distinction was firmly held by the Bowman Co. who, at the time, had the majority of major league baseball players under contract to appear on their cards. So it was quite the task that Topps even decided to compete with the big boys on the block, so to speak. Enter Sy Berger, whose infectious personality and professional diligence in designing every card in the 1952 Topps issue himself, literally propelled Topps to the top of the sporting card world. Berger, in a Society for American Baseball Research interview, recalls his work tirelessly putting together the 1952 Topps baseball set.

"You’ve got to understand, we were neophytes in this, in putting out cards, especially seasonal cards like sports cards. Which I want you to know, I wrote very single one of those 1952 cards. I wrote them and I recalculated the statistics because everything in one book says a guy’s 6 foot 2, in the next book it says he’s 5 foot 11. One says he weighs 300lbs, the other says 200lbs. You know, information wasn’t that ready in those days and I worked and I did everything...the whole series at home."

"My hope in those days was to go into a clubhouse and sign every guy in the clubhouse. I wanted to sign everybody. Every time a team came to New York or Brooklyn I was there. I brought bubble gum into the clubhouses, I became very friendly with all of the players. I was always around."

Which is exactly what he did. Berger was not only a gifted artist and businessman, but an incredible salesman, too. After the release and subsequent success of Topps' 1952 baseball issue, the Bowman Co. never had a chance; and within 3 years--after producing their final baseball issue in 1955--they were purchased. By who? The Topps company, of course.

Berger had done his job and the sporting card industry has never looked back. The Topps Co. is still the big dog on the block and continues to produce the hobby's finest and most collectible sets to this day. Thank you, Sy Berger!

How Can You Begin Your Collection Today?

Even though a complete set of 1952 Topps baseball cards would fetch literally tens of thousands of dollars on today's market, you, too, can begin collecting 1952 Topps baseball cards. You'll probably have to narrow down your wish-list, so to speak, by searching for the players and/or teams you have an afinity for. I'm a St. Louis Cardinals fan, so that's where I start. From there, it really becomes a matter of budget; how much are you comfortable spending.

For others, there's an option that many people have chosen, myself included. In 1983, Topps issued a complete reprint of their famed 1952 baseball card issue although in the smaller, modern-day dimensions. This set can easily be found on eBay or at card shows in the $100-$300.00 price range depending on condition.

Whatever your fancy, or level of baseball card collecting, every serious collector should have at least 1 card from the Topps 1952 baseball issue. The set is beautiful, very collectible, scarce, and yes, radically cool! 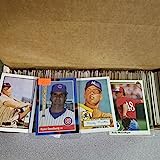