Abbey Bominable is one of the ghouls from Monster High. She is actually an exchange student who comes from the North. As you would expect, her father is the Abominable Snowman or Yeti. She is not one of the original ghouls from the school, she actually made her first appearance in the episodes about halfway through 2011. Since then she has been a popular character and there have been several doll versions of her brought out. So now let’s take you through each doll in order of it’s release.

Get The Original Abbey Online 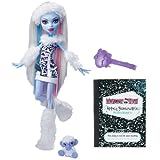 So the very first Abbey Bominable doll that was released came from the Schools Out line which came out over the summer of 2011. This first doll sees Abbey wearing her classic outfit which includes a cute little dress with fir trim, some big white snow boots and some woolly arm warmers. She also wears a white fir headband around her head to keep her ears warm. Her hair is long and straight and a mixture of white, blue and pink. She also wears a small black purse at her side. The design of this doll is in keeping with her chilly heritage and she looks like she could quite happily wear this outfit for a day out in the Arctic.

Along with the doll itself there are also a few nice extras with this one. You get a little figure of Shiver which is Abbey’s pet woolly mammoth. Shiver is very cute here and looks just like you would expect. You also get an Abbey Bominable Monster High diary, much the same as the ones you get with the other popular characters from the show. As tends to be standard issue with the vast majority of dolls you also get a little brush which you can use to comb the dolls hair. This first doll is really a very good representation of the character that we see in the episodes, as it was the first one the makers behind the dolls, Mattel, obviously wanted Abbey to look very much like we are used to seeing her in the series. Overall a very good quality doll that fans were eager to snap up when it first came out.

Ready For The Beach

The second doll that Mattel released came out at Christmas 2011. This doll was from the popular Skull Shores line. These dolls were all based around a storyline where the ghouls visited a desert island so they were all dressed in summer clothes ready for the beach. So in this one Abbey is not wearing her warm outfit, instead she has on a small top and a little wrap around skirt. She also wears a sun hat and high heel shoes. As is the case with all her dolls her complexion is light blue so it looks as though she is always cold. The hair for this doll is in a long ponytail, again it is white, blue and pink.

With all the skull shores dolls you got a little map of the island and this is also the case with the Abbey Bominable one. You also get a little frozen dish with what appears to be ice cream in it. Plus as you would now have come to expect there is a hair brush included. Although this was a popular doll it is maybe one of the poorer ones. Abbey is designed in a way that she looks best when she is in cold surroundings so it almost looks a little bit odd that she is decked out for the beach in this one.

The Dead Tired line of dolls came out early 2012 and featured the ghouls ready to have a sleepover. Also included in this line were Clawdeen Wolf, Draculaura, Cleo De Nile, Frankie Stein and Ghoulia Yelps. So as you can see a large line released by Mattel. The idea behind Dead Tired was that the ghouls were getting ready for a sleepover. The Abbey Bominable doll in this one is wearing a little blue night dress. She wears her hair down and there are no streaks in it this time. She also has two little pompoms which hang down from the top of her dress.

On her feet she is wearing pale blue slippers which have a Yeti design on them. Included with this one are a little eye mask and a tub of ice cream. Unusually there is no hair brush with this doll, strange really as at a girly sleepover brushing your hair is something that would probably happen.

Get The Limited Edition Doll Online

In June of 2012 an exclusive Abbey doll was released. This one came with three different outfits and was under the I Heart Fashion line. The packaging for this comes with Abbey in one of her outfits and then two others which look like they are hung on coat hangers in a wardrobe. The idea behind this one is really that you get a basic doll but with lots of different clothes to dress her up in. The doll itself then is pretty standard, she has her hair down with the usual blue and pink streaks in evidence.

So the outfits for this one include one pink dress with stitching neatly done up the front. Another outfit sees her in long pants with a long sleeved top with a pink and white floral design on. Then the third outfit consists of a short skirt with a black lace one over it and a little pink top. Along with the dresses there are also three different kinds of footwear, a necklace, a purse, earrings and an iCoffin (phone). This is a limited edition release so it can be a little harder to find when trying to buy this one. The fact that you really get three completely different outfits makes it a good value doll with lots that appeals to fans of Monster High. Although this is said it be exclusive to Walmart there are a few places you can buy this one online.

Skates At The Ready

Quite an imaginative line of dolls was the Roller Maze line which was released in July of 2012. The Abbey doll here actually came in a twin pack with Ghoulia Yelps. So you had to buy both dolls to get hold of Abbey. The theme features the ghouls ready for a roller derby so they have their skates on and helmets at the ready. Of all the releases that we have seen over the years this is perhaps the most unusual, but it is a very good mix of dolls. In this range the Abbey doll is wearing a short blue dress with a black top over the top. Her hair is unusually short and has green streaks, a style we have not previously seen.

This one also comes with some nice little pink knee pads and some pink skates that she wears. On her head she has the option of wearing her blue skull helmet which is obviously for when she is out skating. There are no other accessories with this one it seems, so again no brush.

Abbey Bominable At Her Best

Late in 2012 we were given the new Ghouls Rule line of toys. This release is based around Halloween and the ghouls are out in their most fabulous dresses. This is a chance to see Abbey Bominable really push the boat out, her other outfits have all been pretty simple but this one is a little bit more interesting. In the Ghouls Rule line then the doll has a pink and ice blue skirt which puffs out. She wears a faint blue shirt with fir around the collar and cuffs and little pompoms hanging down. On her feet she wears white wedges that are trimmed with blue fir.

Her hair is done in a fancy style, it is mainly white but has a few tinges of blue in there for good measure. She also has a little mask that she holds in her hand. Along with this she also has a few little accessories to make the pack more appealing. Overall this is a very good doll, the outfit is a little bit more adventurous than the other ones we have seen her wear.

As you can see if you are a fan of Abbey Bominable from Monster High then there are plenty of dolls for you to choose from. It is expected that Mattel will release more dolls in 2013 that will feature Abbey and we should see her in some interesting new storylines. Mattel are keen to bring out new dolls every few months and with Abbey now being one of the more established ghouls we can expect lots more from her in the future.