What was your favourite pastime when you were a child? Most of us grew up playing with LEGO and some of us still enjoying this favourite pastime. The Danish manufacturer is a world renowned toy company that is fully dedicated to the development of children's creativity. The LEGO-Bricks are world famous and these iconic blocks are the best materials to exhibit your inner talent.

Here are some awesome and incredible LEGO creations that reflect the artistic skills as well as the love for the favourite pastime.

Australian architect Ryan McNaught created an awesome replica of Apollo 11 with LEGO bricks. The LEGO model is 5.7 metres high and took 250 hours to create. Ryan McNaugh is a huge LEGO fan and sells his LEGO creations. He also created a huge model of LEGO Love Boat based on a famous television show.

Netherland based Paul Janssen built a replica of the Ohio Football stadium. Paul spent over 1,000 hours in two years to erect this LEGO version Ohio Stadium. The replica consists of one million LEGOs. It took nearly three years just to collect the necessary LEGOs for his project. His creation also includes used and new LEGO items that were purchased online.

Artist Nathan Sawaya created a life-sized Conan O'Brien Statue which stands over six feet tall. He was commissioned to create this cool LEGO statue. The statue also features a black suit, red tie and blue-shirt created from the iconic bricks.

This is another cool creation from Nathan Sawaya. This time the artist created a realistic cello out of LEGO bricks. The amazing part of this cello is that it can also be played but sounds very different from the real one. Check the video below where Nathan shows how he created this cool instrument.

A 5 feet and 8 inches tall LEGO statue of Jesus was unveiled by a Swedish Church in 2009 at an Easter service. The statue consists more than 30,000 LEGO bricks and it took over 18 months to assemble. The statue is based on 19th century statue by Danish sculptor Bertel Thorvaldsen. But this LEGO statue of Jesus caused controversy that the Christians across Scandinavia protested the unveiling of plastic Jesus.

The LEGO Animation Station Video Camera was displayed at the Nuremberg Toy Fair and Consumer Electronics Show in 2009. Specially designed for kids, this LEGO Video Camera features a 1.4 LCD flip-out viewer, five-way navigation pad on the back, a PC software and also includes a manual. Due to security reasons the LEGO pieces do not come apart which makes it a kids-friendly gadget.

UK based ColorByNumbers' colorful LEGO wallets are perfect for any LEGO enthusiasts These limited walltes are handmade and available with a selection of LEGO bricks so that users can customize them further.

Legoland in California recreated the historic Presidential inauguration of Barack Obama that features thousands of figures created from thousands of bricks. The structure also features Obama's wife and his daughters witnessing the presidential oath on the steps of the Capitol. The scene also portrays police escort and cheering plastic crowds lining the plastic street. The plastic inauguration was displayed at the Legoland in May, 2009. 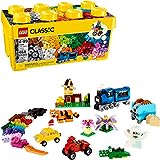 Fergie used specially designed dress and accessories made of LEGOs. The singer performed using the plastic outfits during the Black Eyed Peas' stage performance at the Nickelodeon's 24th Annual Kids' Choice Awards in Los Angeles in April, 2011. The outfit was perfect for the singer's performance of the hit song The Time (Dirty Bit).

World's largest LEGO tower stands 102 feet tall and it was constructed in Sao Paulo, Brazil. The tower is made of more than five-hundred thousand bricks and with this plastic monument Sao Paolo has become the 32nd country to have a Lego tower.