Beyblades for Sale - A Guide to Beyblades

Last Christmas, Tristan, one of my grandsons, wanted a Beyblades set as one of his gifts from Nana and Papa (that’s us!). We searched at Walmart and Kmart for a Beyblade toy or two, but we couldn’t find any. I don’t know if these retail giants didn’t carry Beyblades, or whether they were just sold out. Of course, as a grandmother, I really try to get the grandkids what they want for Christmas, so we drove fifty miles to the nearest Toys R Us in search of Beyblades, and we found them there. Wish I’d known that I could have ordered them from Amazon, as they usually have some pretty cheap Beyblades. Tristan was elated with his Beyblade toy he received on Christmas Eve, and he and his older brother, Jonathan, spent the entire day on December 25th playing with the Beyblades. My daughter said they practically ignored all the other new toys they received as gifts. Frankly, I’d never heard of Beyblades before Tristan asked for them.

The fun of playing with Beyblades hasn’t worn off for Jonathan and Tristan, and in fact, they’ve spread the Beyblades fever to two of my other grandsons, Jacob and Caleb. Jacob and Caleb spent the night with Jonathan and Tristan one night a month or so after Christmas, and of course, the boys engaged in Beyblade battles…one Beyblade battle after another. Now all four grandsons are hooked. Just a couple of weeks ago, Jacob celebrated his seventh birthday, and guess what he asked for? Yep, Beyblades! Hubby and I got him a Beyblade stadium, a Beyblade carrying case, and some Beyblade tops. His mom has reported that he and Caleb are having a blast with their Beyblades!

I like the fact that the boys are so into Beyblade tops. In my opinion, they’re a great combination of an old-fashioned toy and a cutting-edge modern toy. The premise is based on spinning tops, which boys have played with for decades. Best of all, no batteries are required! A “crank,” for lack of a better term, is pulled, and the top goes into a frantic spin. The Beyblade battle takes place in a Beyblade stadium, a plastic arena that keeps the Beyblade battle in a confined area. One top tries to “kill” the other top. The tops themselves look super-modern, and they have names like Fang Leone, Galaxy Pegasus, Earth Eagle, Blitz Striker, Rock Scorpio, L-Drago, Storm Pegasus, Storm Aquario, and lots more.

Beyblade started in Japan as a manga comic series in 2000. The plot centers around teams of kids who pit their power tops against each other in battles. They Beyblade stories were turned into a television series in Japan in 2001, and it quickly spread to the United States. In 2010, a later series, Beyblade: Metal Fusion was released in the U.S., and in 2011, the latest series, Beyblade: Metal Masters arrived on American televisions, with the Beyblade metal fight series. In the USA, these can be viewed on Cartoon Network, and believe me – my grandsons are glued to the set when the Beyblade shows are on! Theser are also Beyblade games for video games stations like PlayStation, Nintendo Wii, Game Cube, Game Boy Advance, and Plug-and-Play. This year, my grandsons want Beyblade games for their Wii.

Beyblades enjoys a cult following today, which I didn’t realize until I did a little research. Kids of all ages, along with some adults, are totally immersed in the Beyblade phenomenon. The toys are extremely popular not just in Japan and the U.S., but around the world, in the UK, Australia, and in much of Asia and Europe. In fact, there are many official Beyblade battles and tournaments all over the globe now. Fans can also experience a Beyblade Battle and Beyblade games online.

Although Beyblades are based on a simple old-fashioned toy, the modern counterparts aren’t the innocent wooden tops you might have played with as a child. These “attack tops” consist of attack rings, weight disks, bit chips, spin gear, and a blade base. Each model moves and acts differently once activated. Some rotate clockwise, while other spin counter-clockwise. Some Beyblades move faster than others. Some Beyblades are more powerful than others, too, and they attack in different ways. All of this is taken into account for Beyblade battles. The players need to know their individual top, including its strengths and weaknesses, to compete successfully in Beyblade battles. There’s a lot more strategy involved in Beyblade battles than you might think!

You can find all kinds of Beyblades for sale, including individual tops, Beyblade stadiums, carrying cases, and Beyblade games on video. Most of the tops are very reasonable in price, unless it’s a collector piece. Yes, Beyblades have become highly collectable! If you have a kid on your gift list who’s into Beyblades, there’s lots of gear you can give him for Christmas or birthday. He’d appreciate a new top, for one thing. According to my grandsons, you can never have too many Beyblades! If your Beyblades aficionado is just starting out, you could get him a starter set that includes a couple of tops and a Beyblade stadium. 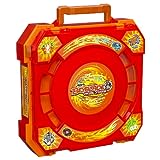