Billiard Trick Shots: How to Pocket 4 Pool Balls in 1 Shot

Although I love to play billiards, I'm a long way from being an expert. I learned how to set up and hit four balls in one shot, and sometimes I even make it! Last year, I started playing on an APA (American Pool Association) league that has some phenomenal players - some of the best amateur players in the nation and the world.

That's why I asked Mike Lacy, one of the best players in the league, to help demonstrate a trick shot I learned a long time ago but haven't yet mastered. He shared tips with me on how to make this shot consistently.

With a little practice, you can too!

How to Make a 4 Ball Trick Shot

Setting up for this shot isn't difficult, but you have to be careful. As you can see in the photo below, the four balls must be "frozen." That means they have to be touching each other. The first one is as close to the edge of the side pocket hole as it can be.

Next, Place Your Cue Ball

Place your cue ball at the point where your two imaginary lines intersect, as shown in the photo below.

This is the tricky part of the shot.

As shown in the photo to the right, you'll use a bit of what's called "English." English puts a particular spin on the cue ball that drives the balls you strike to go faster, slower, or veer slightly. In this trick shot, you'll aim to the right of the vertical center, and a bit below the horizontal center. As you look down the direction of your stick, it should be aimed at a point between the center of the third ball from the side pocket, and where that ball's edge touches the second ball. In the photo above, it would be a point about 1/4th of the distance between the blue two ball and the red three ball, striking the striped one.

(If you're confused, start by aiming at the very center of all four balls and then shift your aim slightly to the right until the shot works for you.)

Other Pool Trick Shots You Can Practice

There are many different kinds of trick shots, but if you can master this one, you'll be able to impress your friends even if you're a casual pool player.

Although I've been playing pool for a couple of decades, I'm just now learning how to control the cue ball and my game because I'm playing alongside some of the best players in the United States. If you're more serious about your game, and want to improve it, take a look at some items that are recommended by some of the best players in the nation: 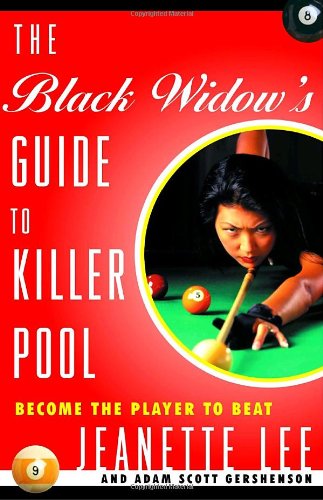 The Black Widow's Guide to Killer Pool: Become the Player to Beat

Jeanette Lee, the Black Widow, is known as one of the best pool players in the world. She offers workshops at the pool hall where my league competes and is an unbelievably good player.