The Lego Group is celebrated worldwide for its beautifully designed plastic interlocking blocks which come in different shapes and colors. By the year 2015, the company has produced over 600 billion blocks.

The founder of the company, the late Ole Kirk Christiansen was born in 1891 and died in 1958. Ole Kirk was a carpenter. He began building wooden blocks in his carpentry workshop in 1934. As of 1949 the group began building plastic blocks. At first, they didn’t sell a lot as people were used to wooden blocks but in time people began buying the plastic ones.

A private-owned company situated in Billund, Denmark, the company surpasses other companies in the manufacturing of interlocking plastic blocks. It is very easy to assemble the blocks which hold firmly once you intertwine them, and easy to disassemble them.

The word ‘Lego’ comes from the Danish phrase ‘leg godt’ which means ‘play well.’ As far as it goes, it is fun and engaging playing with the blocks as you assemble the blocks to construct something. In addition, it is safe playing with Lego blocks. The motto of the company is: ‘Only the best is the best.’ No substandard but the highest quality attainable. Ole Kirk emphasized to his employees the importance of ensuring they manufacture or make the best quality blocks because the best never becomes the worst.

Having looked at the brief history of Lego Group the manufacturers of Lego plastic Lego blocks, let’s find out the benefits it affords children when they play with the blocks.

“The activities that are the easiest, cheapest, and most fun to do – such as singing, playing games, reading, storytelling, and just talking and listening – are also the best for child development.” (Jerome Singer)

It’s not so much what children learn through play, but what they won’t learn if we don’t give them the chance to play. Many functional skills like literacy and arithmetic can be learned either through play or through instruction – the issue is the amount of stress on the child. However, many coping skills like compassion, self-regulation, self-confidence, the habit of active engagement, and the motivation to learn and be literate cannot be instructed. They can only be learned through self-directed experience (i.e. play). (Susan J. Oliver) 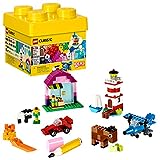