Lego recently forged a partnership with Marvel which allowed them to tap into the vast wealth of characters that the Marvel name has given us over the years. Names such as Superman, Batman, Spiderman and many others are to be made into Lego minifigures and Lego sets. These are due to be released in the January of 2012 with more sets of Superhero Lego to come in the future. So let’s take a look at some of these toys and see how you can buy them online. 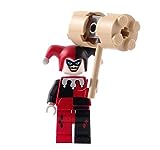 First up Lego announced the release of a range of classic Marvel characters in minifigure form. Lego have had great success with minifigures in recent years so it’s no surprise they decided to turn some of our favourite characters into little Lego men. These figures were previewed at Comic-Con where 3000 figures were given out to wet our appetite. These can now be bought online over at Amazon. The figures go on general sale in January.

So you may be wondering exactly which characters we are going to be seeing in the new range. Well there have been thirteen names released so far with more to come. So the initial batch is going to contain: Batman, Robin, Superman, Lex Luthor, The Riddler, Wonder Woman, The Joker, Catwoman, Two Face, Bruce Wayne, Poison Ivy, Bane and Harley Quinn. There are expected to be more minifigures in the not to distant future and no doubt we will update you on this information when it is made available. So as you can see there are quite a few of these for sale already and if you can’t wait you can buy them online now. Otherwise you will just have to wait till they go on general release in January.

Lego have also announced that as part of their DC Universe line they will be bringing out a selection of Batman Sets new for 2012. There have been quite a few Batman toys in the past but these are all to be new ones and there are also some new characters that we have not seen in Lego form before. The most popular looks set to be the Batcave. This is the largest of the Batman toys that has been scheduled for release in January. It comes with over 600 different pieces and features a host of minifigures that you will not have seen before.

Another set new for 2012 is the Batwing. Again this is one that has been released by Lego before but it is being brought back with a new look and new characters. This one will have around 300 pieces and feature the Joker and his henchmen as the minifigures that come along with it. There will also be a Batmobile, this Superheroes set will include over 500 pieces and feature a getaway car with Two-Face and his henchmen. This is set to be another very popular one. There is also going to be a Catcycle which is apparently Catwoman’s vehicle of choice.

Lego are also going to release two Ultrabuild characters from the Batman range of toys. These are going to be Batman himself and The Joker. Each set will contain around 50 Lego pieces and the toys will cost around $15 each.

Lego are also planning to bring out some Superman Lego Sets in the near future. The first of these is going to be Superman vs. Power Armour Lex Luthor. This is a set that will contain around 200 pieces and include a rather impressive looking laser cannon. There will also be Superman, Wonder Woman and Lex Luthor in a purple suit. There is again lots of scope for Lego to bring out more Superman sets in the near future and we will keep you posted if and when this happens.

As you can see the Lego Superheroes range really is taking shape very well. The new sets for 2012 will no doubt capture the imagination of millions of children and adults all over the world. The new contract between Marvel and Lego is set to be a massive success and the possibilities for what Lego can do with this really are immense. The prices for these will no doubt fall in time and you can pick up some cheap deals if you want to buy online. If you or your children have ever seen a superhero movie then no doubt they will instantly fall in love with the new range of Lego Superheroes that are now coming out.