The Wonderful World of Paddington Bear

Cynthia has a degree in History and Business Economics. She loves archaeology and would happily spend every holiday exploring ancient sites

Paddington Bear was one of my favourite characters when I was a child, and I loved reading the adventures of the little bear from Darkest Peru. He is the creation of author Michael Bond, but how did he come up with such an iconic character?

Well, one Christmas Eve in 1956, Michael Bond saw a lonely little teddy bear sitting on a shelf in a shop on London. He felt sorry for the little bear, and bought it as a Christmas present for his wife Brenda, who called it Paddington as they were living near the station of that name at the time.

This gave Michael Bond the idea for some children’s stories based on the bear called Paddington. The stories developed into a book, and he sent it to his agent and it was eventually published by William Collins and Sons. This very first book was entitled ‘A Bear Called Paddington’ and was illustrated by Peggy Fortnum.

This first book in the series was published on 13th October 1958 and was followed by ‘More About Paddington’ in 1959, ‘Paddington Helps Out’ in 1960, ‘Paddington Abroad’ in 1961, and seven more books until ‘Paddington : Here and Now’ in 2008. These much loved children's books are still selling well today and have sold more than 35 million copies all over the world and have been translated into over forty languages.

Please Look After This Bear

So what was his life story and how did he come to be found on a London station? He was brought up in Darkest Peru by his Aunt Lucy, after he had been orphaned in an earthquake. When Aunt Lucy went to live in a Home for Retired Bears in Lima, she decided that the best place for her young nephew to live would be England.

So she made him have English lessons and then he stowed away on a ship’s lifeboat with a label attached to his duffle coat that said ‘Please look after this bear, Thank You’. He was found sitting on his suitcase, near the Lost Property Office on Paddington Station by Mr and Mrs Brown who had gone to collect their daughter Judy.

He had found his new family, and his adventures had begun as a member of the Brown household. He is usually dressed in a blue duffle coat, floppy bush hat and wellingtons, and hide your marmalade if he comes to visit as that is his favourite food. His most treasured possession is the suitcase he brought with him from Peru that has a secret compartment where he keeps his important documents. 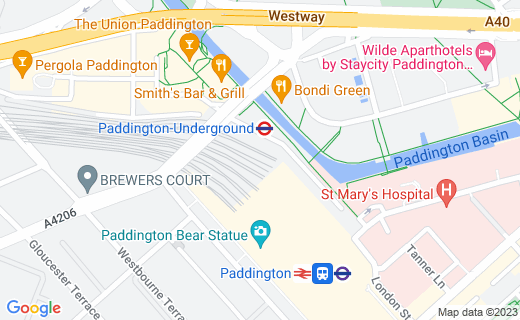 He Hits the TV Screens

Paddington Bear hit the small screen for the first time in 1975, with a series of five minute animated programmes created by Ivor Wood for FilmFair Limited. There were fifty six episodes made and they were all narrated by Sir Michael Hordern.

These short programmes were followed by three half hour television specials. It wasn’t until the late 1990s that a new, fully animated cartoon series of Paddington Bear’s adventures was made by the Canadian company Cinar, where all the characters spoke rather than relying on narration. If you missed all of these adventures on the TV don’t despair, because you can now buy the stories on DVD, so you can enjoy the stories of the little bear from Peru whenever you choose.

Our lovable bear from Peru is also going to get his very own Paddington movie. It is projected to be created from using a combination of live actors and images generated on a computer, and the story has incorporated many of the characters and themes from the original books. The film is going to be produced by the same man who produced the Harry Potter films, David Heyman.

The original books are still going strong after fifty years, and are firm favourites with children and they should be on every child’s bookshelf. You can get these great books in hardcover and paperback and you can also find all of the stories beautifully bound in compilations.

Some of the older, original Paddington bear stories are now highly collectable, with some of them being worth a lot of money, especially if they are First Editions. If your child loves Paddington Bear, but prefers art to reading, there are now sticker books and colouring books that will provide your children with hours of fun and creativity.

The first Paddington Bear merchandise was not produced until the early 1970’s, and the first stuffed bear was made by Gabrielle Designs in 1972 in the United Kingdom. In the United States, a plush Paddington Bear was produced by Eden Toys in the mid 1970’s and this helped to spread his popularity through America and then the rest of the world. Both of these companies ceased trading in the late 1990s, and new licences have been awarded to several companies, so there is now a wide range of Paddington Bears on the market.

There are small, soft, cuddly Paddington Bears that make a wonderful gift for infants and very small children, and plush ones in different sizes that are great for kids of all ages. You can also get clothes, hats and boots separately to dress your Paddington Bear in, so that he can have a change of outfit now and then.

Of course the most exciting place to buy your Paddington Bear is from the stall on the Station itself, but you can find a wide range of these toys and gifts in stores and they can also be easily found online. Amazon has a great range of Paddington Bear stuffed toys, so if you are looking for great gifts have a look online today.

The cuddly little bear from Peru is due to find himself back on the big screen late in 2014. The scheduled release date for the UK is 28th November, so Paddington Bear could find himself a big hit over the Christmas season!

The voice of Paddington was going to be that of the talented actor Colin Firth, but he dropped out in late June saying he didn't feel that his was the right voice for the little bear. However,there are a host of other big stars speaking the roles of the other main characters such as Nicole Kidman as Millicent, Hugh Bonneville as Mr Brown, Sally Hawkins as Mrs Brown and Peter Capaldi, soon to grace our small screens as Dr Who, as Mr Curry.

No doubt the film's release will see a huge influx of Paddington Bear merchandising reach the stores for Christmas 2014 and as well as being a huge box office hit, he may well also find himself in the Christmas top 10 toys list for this coming Holiday Season

Other Paddington Bear Toys and Gifts

So apart from the stuffed toys and books, what else can you find with your favourite bear on it? Well the list of Paddington Bear toys and products is endless. There are backpacks, blankets, posters, tea sets, party gift bags, and figurines. If you cannot find what you are looking for in the shops, there is a wide range available online. So bring the magic of Paddington Bear to the children in your life, and introduce a new generation to the bear from Darkest Peru who was found by Mr and Mrs Brown on Paddington Station!