The Learning Benefits of Card Games

There are so many great reasons to play cards. First there is the fun. There are not many better ways to have a really great social interaction with friends and family. I remember as a child going to my parents' friends houses where they would get together to play euchre or poker. Even at our family gatherings, there was always a poker game that was taking place. I can still hear the laughter and fun that was shared around those tables.

Card games hold a different yet very important attribute for children, that is one of learning. There are several games that you can play with just a regular deck of cards that will greatly enhance your child's learning of basic math skills. However, the first card game that I will share requires a special deck of cards. The game is called Set.

I was first introduced to Set when I was attending professional development training for teachers. In a series of math workshops, we explored what makes a good math game. There are many things that are included in this list such as, it involves thinking and reasoning, all participants are actively engaged at all times, it employs more than one of the standards of mathematical practice, and is of course fun all at the same time. Set is one of those games that easily lends itself to these. In fact it was around the holidays when I learned of this game and it became a "must give" on my list to everyone with kids.

One of the great things about this game is that it can be modified to fit ages 5 and higher. Take one or two attributes out and it becomes the perfect game for younger children. Leave all attributes in and it will even challenge adults. 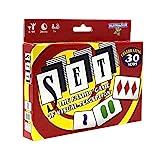 Does Set sound like a game that you would enjoy playing with your children?

How to play Set.

It's easy, well sort of. First you place twelve cards face up on the table. The goal is to find a "set." There are four attributes to create a set. A set is a match of three cards that have all the same or all different attributes. The four attributes are: shape, color, number, and inside filling of the shape. All players are looking to make a set at the same time. When you think that you have found a set, you call out set and then take your cards. You state why you believe that you have made a set and the players either agree or disagree with the match.

An example of a set would be all diamonds (shape); one is red, one is purple, and one is green (color); there is one diamond on one card, two on the next, and three on the last (number); and they are all empty inside (filling). Each attribute is either all the same or all different.

My students absolutely love this game and literally cheer every time that we play it. It's great because everyone is involved in finding a set at the same time and no one is waiting for a turn. They even help each other find sets and are very patient in explaining to another student why it may not be a set. There is also a daily set puzzle at www.setgame.com.

A deck of cards is a great math learning tool. There are some fantastic games that you can play with very little monetary investment. Simply head to the dollar store and pick up a regular deck of playing cards. Here are some games you can play.