Athlyn Green enjoys unique items and stunning collectibles and she shares her discoveries with readers.

Uh-oh! Snow White Has Turned into the Wicked Queen!

How Do Topsy Turvies Change Into Multiple Dolls?

If you've never seen or held a topsy-turvy doll in your hands, you may be wondering how these dolls change into two, three or four characters. It seems somewhat improbable.

Because these dolls transform, they help take storytelling to a new level. As you tell a child a nursery rhyme or a fairytale, you change the doll to depict the character or whatever creature or scene the doll has been designed to portray. Kids absolutely love this.

So how do topsy-turvies change into different characters?

It's all in clever designs that allow for a hidden doll or animal. A topsy-turvy doll may be flipped upside down, to reveal a doll hidden away underneath a full skirt. For example, the popular Cinderella topsy-turvy has Cinderella in a beautiful gown but when she is turned upside down and her skirt pulled downwards, another doll emerges. (The two dolls are joined at the waist.) Now, it's the wicked stepmother who appears and her dress is the reverse side of Cinderella's gown and is usually in a different color. This is similar to a lined garment but in this case the skirts of the two dresses are sewn together. As the wicked step mother appears, Cinderella disappears under the stepmother's skirt. Imagine a young child's delight to discover that there's a doll hidden within a doll.

If you are familiar with the Russian Matrushka Nesting Dolls, you know how multiple dolls can be hidden within one doll. topsy-turvie dolls are similar but by dent of their designs, offer even more.

Some topsy-turvies change into three dolls and in some cases, as many as four dolls in one. How is that possible? In addition to turning the doll upside down, a simple twist of a wrist (i.e. turning the doll to face the other way), may reveal another face on the other side of each doll's head).

This article explores topsy-turvy dolls. Are you ready to get acquainted with them?

Can you guess where it might be hiding? Within a pumpkin? Under a tuffet? Under a skirt? The sky's the limit and much depends on the design of a particular doll.

Imagine telling a young one the rhyme about Little Miss Muffet and when you reach the part "along came a spider," flipping Miss Muffet over to reveal a cute, fuzzy spider perched on top of the tuffet. (hidden under Miss Muffet's skirt until revealed).

What child wouldn't be riveted? If your kids wiggle and squirm during story-time, a topsy-turvy doll just might engage their attention.

Little Miss Muffet Has Disappeared and the Spider Has Appeared!

Imagine a child's delight in flipping this doll over and discovering the castle, Rapunzel's long hair, and Rapunzel's rescuer climbing up! all concealed under the skirt. What a feast for a child's eyes and a way to draw them into the story. 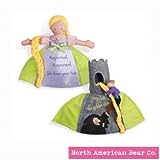 The naughty and nice topsy-turvy doll is sure to invoke giggles. "Nice" is a proper little miss, clean and well-behaved... tht is, until "Naughty" is revealed. Uh-oh! What has she been up to? What's "Naughty" doing with those... ulp!... scissors?

This is such a cute idea for a kid's Christmas present because a parent can relate how Santa views good and bad behavior and then can reinforce the thought that a well-behaved child may be rewarded, while a misbehaving child might want to change their behavior.

The video below shows how cute knitted turvies can be, perfect for a young child to snuggle as they settle down to sleep. Watch as these animals, dolls, and even a dog house, transform into something completely different.

If you are looking for free patterns, these can be found online, as seen at the sites below.

Jean Greenhowe has an excellent pattern for a knitted Cinderella turvy doll. Cinderella is smiling and has pretty ringlets and is holding a fan and what looks like a prayer book and when you flip her over, a sad-faced Cinderella emerges with a patched gown and a washcloth in her hand.

In A Historical & Sociological Context

How Reversible Dolls Came Down to Us

The original dolls are believed to have been created before the Civil War on plantations in the Southern United States and it is thought that slavery played a roll. It is commonly accepted that these dolls were made for children and depicted one white child and one black child.

After the 1900s, black-white two-in-one dolls were manufactured and mass produced.

Soon, pattern companies got on board and produced patterns for sewn dolls.

The dolls continued to grow in popularity and it's not hard to see why they were a perfect fit for fairy tales, which often explore themes of good versus evil, rich versus poor, sad versus happy, etc. And in time, the dolls were made to portray fairy tale characters.

Newer incarnations embody many themes and the dolls have been fashioned to portray things kids find fascinating, such as dinosaurs, forest creatures and pets, as well as modern fairy tale characters, such as Little Mermaid and Elsa from Frozen.

Opposite Themes Portrayed in Dolls

Other topsy-turvy dolls reveal additional characters. This is accomplished by different faces on the doll's head. When the doll is turned, a new face appears.

Little Red Riding Hood has a secret. She transforms into "Grandma" when she is tipped over but then . . . uh-oh! if grandma is turned the other way, there's that bad, bad wolf.

Other Triple dolls included Hansel and Gretel and the witch and Goldilocks and the Three Bears. When shopping for a doll, you can choose whether you want a double, triple or even a doll with four characters.

Beauty and the Beast... Oh, and the Prince, of Course

Do You Own a Topsy-Turvy?

For the Kid in All of Us

It's not surprising that kids aren't the only ones who enjoy these dolls. Adults collect them, too. And many dolls are considered treasured keepsakes. With the sheer variety available, there's a doll for every taste.

Dinosaur Turvy--What's Hiding Inside That Egg?

Where to Get These Dolls

These dolls can be found through a number of online retailers. Amazon, Ebay and North American Bear are good places to check. There are also other outlets that sell topsy-turvies:

Do You Collect Topsy Turvies?

Whether factory-produced and made of fabric or plush, whether made by the home crafter in rag dolls or sewn, crocheted or knitted, these dolls are truly captivating. When tipped, turned, and reversed... magic happens.