The more you struggle, the tighter you are trapped.

Chinese finger traps have existed for hundreds of years. These fun puzzles are made out of woven bamboo strips. The trap is shaped like a cylinder, and it traps your index fingers when you put them through the holes. Most people try to free their fingers by pulling outwards, but this only makes the trap pull tighter around your fingers and further trapping them. The purpose of the trap is to solve the puzzle of how to get your fingers free.

A lot of jokers out there like to imagine that they can truly trap someone with Chinese finger traps, which are also commonly called Chinese handcuffs. However, if you strugge and pull hard enough on it, the bamboo will eventually break. These traps are a useful tool for teaching lessons about patience and not struggling.

Some can't figure out how to get free of a Chinese finger trap.

Want to learn how to make your own finger trap? 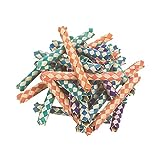 Freeing Yourself from a Chinese Finger Trap

The solution to this puzzle is to stop struggling. Instead of trying to pull your fingers out, push them further in. This will bunch the bamboo strips together, and the trap will loosen around your fingers. Now, you can slowly twist your fingers out.

Chinese Finger Trap as a Metaphor

The idea of how a Chinese finger trap works has turned into a widely used metaphor. Basically, if you try too hard to solve a problem, you won’t be able to—just as you won’t be able to get out of the finger trap if you struggle against it. When you relax, it finally lets you go. If you fight it, you are stuck. This is a fabulous metaphor for teaching people to work together towards a solution as opposed to working against each other and making the problem worse.

Ironically, this metaphor is often used to describe political situations—oftentimes referring to China itself.

How do Chinese finger traps fit into your life? Do you use the toys to trick people, or do you use it as a metaphor? Share your ideas and stories by leaving a comment in the box at the bottom of the page.