How to clean Roman coins

Learn more about these fascinating coins!

I have always been an avid coin collector, as a matter of fact my passion for coins started at an early age. I really have focused most of my life collecting popular coins such as Morgans, Peace dollars, and Eisenhowers. However one day I went to a local antique flea market in Italy. A vendor had a small box with various coins from all over the world. Amongst them was this odd shaped coin that the vendor told me was an ancient Roman coin. Of course I decided to purchase it.

I have always been fascinated about this coin. Finally, one day I had it evaluated and the numismatic expert told me it was real silver and it was worth about $78 dollars! Happy to have found a small treasure, I began reading as much as I could about ancient coins.

As I became more and more enamored with ancient coins, one day I took the plunge and ordered a lot of uncleaned Roman coins. I had no idea on how to clean them so I also bought a cleaning kit with instructions.

Upon opening the package, the coins were really dirty. After all, what to expect after being dug out after thousands of years? The coins were brown and hardly crusted with dirt. It was no mud or powdery dirt, rather it was almost a cement glued on the coin's surface. I knew what I got into, this was no easy job, but with some elbow grease and patience I knew it could have been accomplished.

Historically, since there were no banks thousands of years ago, people used to simply hide their coins underground. Some forgot about them or some didn't make it after going to battle, so those are the coins your are getting. I find this very fascinating, you can almost smell the old dirt when cleaning these coins.

Now back to cleaning, the most important thing to do is to be extremely careful! Ancient coins form a special patina that if removed the coin value will go down. This patina has formed over the years and it has protected the coin. Most coins have a red, brownish or grayish patina. I personally know how a coin without patina looks like. How? Well, numismatics will certainly dislike what I did but it was sort of an experiment out of desperation. Tired of cleaning this one coin that was helpless I left it for a few days in some oven cleaner solution. To my surprise when I rinsed this coin days later it was shiny as a penny! Of course this coin was worth zero, because what I done was stripped the coin from it's patina and with that stripped away all its value. So please do not do this at home! What I did was really stupid!

So if you are cleaning coins and you are scraping so hard that you start seeing some shine you definitely are doing something really wrong!

Cleaning Roman coins can be fun but it takes lots of times and effort. Expect to dedicate days weeks or even months. In order to effectively clean Roman coins you can use some common items found in your household such as:

Start out by simply washing the coin with water, baking soda and dish soap. This will help loosen up some of the dirt. Follow up then by soaking the coins in distilled water overnight.The next morning the tedious job starts, you will need to scrape away how much dirt you can with a tooth brush. A toothpick can be used to remove dirt from in between letters and numbers.

Deciding when the job is done is ultimately up to you. Some people are happy until they see some detail others try to scrape as much as they can. I am always a bit overcautious on over cleaning. As mentioned previously, Roman coins are very different from our modern coins which are graded upon how shiny and close to mint condition they are. Roman coins on the contrary, must have good detail but they must also look like what they really are: fascinating pieces of history. 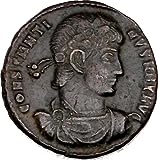